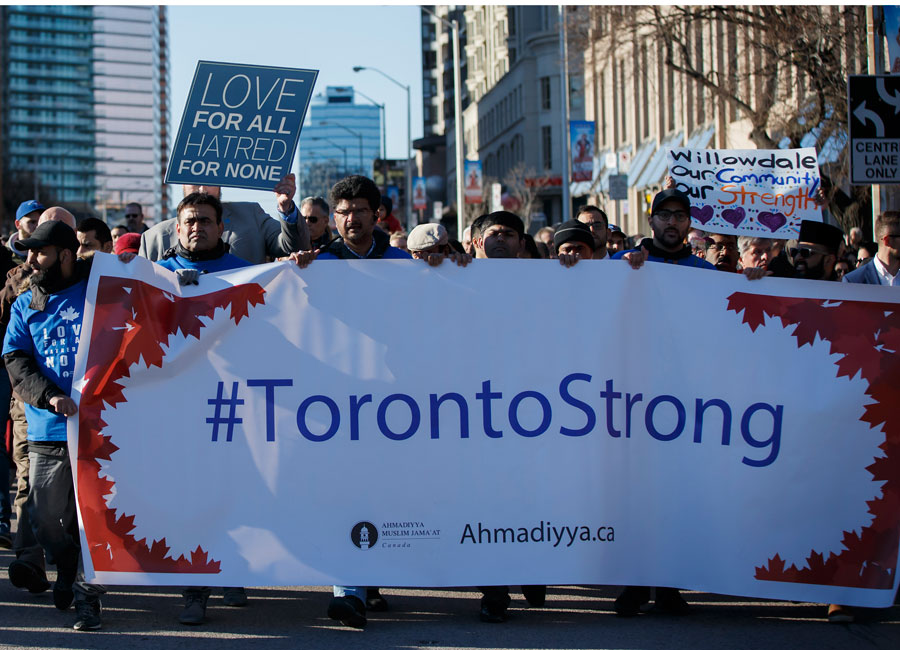 Thousands march to Mel Eastman Square in Toronto in a vigil to honour victims of the deadly van attack in Toronto. (Photo by Cole Burston/Getty Images)

On an unseasonably cold spring evening, close to 25,000 mourners gathered at Toronto’s Mel Lastman Square to show their support and honour the victims of last Monday’s deadly van attack.

The event was held not only to remember those who had been killed or injured, but also to find healing and closure on a tragedy that has left this normally peaceful city in a state of shock and bewilderment.

As the mourners arrived at Mel Lastman Square, they saw ten candles lining the stage, representing the 10 victims of the tragic attack.

Voices from the Vigil

“In Toronto, in Ontario, in Canada, we don’t run away – we run to help others.”  – Rabbi Baruch Frydman-Kohl

“If a part of a body gets hurt, the whole body feels the pain. “Lord, please help the great responders, the doctors and everyone who has given so much to help manage the impact of what happened here last Monday.” – Imam Refaat Mohamed

“We gather this evening to find that our sorrow is reflected in the eyes of the strangers standing next to us. And so is our hope.” Rev. Alexa Gilmour

“Today’s event is a great demonstration, not just to the community here, but to Toronto, that we are strong, and we will move forward together.” – Event volunteer Kevin Joachin

The following are the names of those who died in the deadly van attack.

A vigil honouring the casualties of Monday’s Toronto van attack will be held on Sunday, April 29 at  7 p.m. Hosted in collaboration with community groups Faith in the City and the Toronto Area Interfaith Council, the #TorontoStrong vigil will be held at Mel Lastman Square.

Toronto Mayor John Tory says he hopes the vigil will begin the healing process. “It’s not by any means over but we have to try and get the city back to its life and back to sort of recognizing how resilient were are here,” Tory told CTV News.

Tory also announced that the city is setting up a foundation to raise money for the victims of the deadly attack which killed 10 people and wounded 14 others.

The fund, which will be dispersed to the families of the the victims, has already raised more than one million dollars. You can donate here.

From Tragedy Emerges City  United
When a tragedy of such horrifying proportions as the Toronto van attack occurs in a big city, the response tells a lot about what the strength and resiliency of the community affected. Do we respond in anger or do we seek unity to help us through this troubled time?

After hours of watching the news coverage, we’re numbed into a sense of disbelief and bewilderment. Then, as the casualties are counted and the motive emerges, it can get ugly as we look for a scapegoat — a person or a cause — upon which to pin all the blame.

Seeking retribution and blame is a natural response, but one best left to the police and courts. A much healthier reaction in dark times is to attempt to come together as a community and honour those who lost their lives and the families who are left to cope with the tragedy.

But how do find the positives in senseless violence? We can start by:

Honouring the victims
While details are not yet complete, a picture of those who were injured or killed is finally coming to light. From the 80-year-old grandmother and Blue Jays fan to a Ryerson University lecturer and the single mother to the Jordanian couple visiting family in Toronto, our heartfelt sympathies go out to the victims and their families, hoping that time will somehow heal these devastating wounds.

Adding your name to #TorontoStrong
While public displays of grief may seem maudlin or simply made-for-media photo-ops, a closer inspection of the #TorontoStrong memorial shows flowers, vigil candles, prayer cards and sympathy cards left by residents.

These are the community’s expression of support and commiseration to the victims and their families. The notes and tokens at this particular memorial are especially moving, as they represent the many cultures and religions that comprise this diverse Willowdale neighbourhood. Those who can’t leave their sympathies at the shrine have taken the social media, populating #TorontoStrong with sympathies and best wishes.

Looking for positives
In any tragedy, there are countless acts of heroism and charity, both small and large that, while often overlooked, reveal a spirit that one doesn’t usually associate with this city.

So let’s recognize people like TTC bus driver Bill Perivolaris, who after calling in the disaster immediately sprang into action, checking on the injured and administering first aid.  Many other anonymous locals, including local resident Aras Reisaiardekani, did whatever they could to help out before the emergency services arrived.

Applauding courage and valour
Kudos from around the world are flowing in for courageous police constable Ken Lam. Alone, Lam confronted the suspect as he emerged from the van and wouldn’t shoot despite the fact the suspect was waving what looked to be a gun. Lam’s father, David, retelling of the phone call he had with his son after the arrest is a thing of understated beauty. “My son called me (and) told me, ‘Daddy, everything is fine. I arrested the suspect … I didn’t even fire any shots,’” he said. “I said, ‘You did a good job.’”

Playing your heart out
A tragedy like this one always provokes public appeals for sympathy and calm. Though often banal or forgettable (especially when uttered by politicians), they sometimes ring close to the core of who we are, especially this one made by this gap-toothed hockey player, who urged us to “hold your loved ones tight.” The Toronto Maple Leafs, in the midst of a grueling playoff series against the Boston Bruins, prevailed on that Monday night — winning 3-1 and pushing the series to Game 7.

Details Emerge: Van Plows Through Toronto Pedestrians
The tranquility of a beautiful spring day was shattered Monday afternoon as a van drove into a crowd of pedestrians at the busy intersection of Yonge St. near Finch Ave.

Police say 10 people were killed and 14 injured in the attack. Most eyewitnesses say the white van, which was driving at high speeds, mounted the curb and appeared to be intentionally striking pedestrians strolling on the sidewalk or waiting in a bus shelter. The suspect was arrested in a dramatic standoff with police, asking an officer to “shoot me in the head” and claiming he had a gun in his pocket.

As the numb haze that descended over the city began to lift, details finally emerged about the man responsible for the killings. Police have identified the suspect as Alek Minassian, 25, of Richmond Hill, Ont.

Minassian is said to be a college student who studied computer coding. Acquaintances say he was a quiet, awkward student who may have suffered from a Asperberger’s syndrome. Though police have not released details yet as to what sparked the rampage, there appears to be no political or religious motive. Minassian appeared in court today  to face 10 counts of first-degree murder and 14 counts of attempted murder.

The reason police were on high alert immediately after the tragedy is because this tactic of plowing into pedestrians  has been used in the past by terrorists, most recently in Barcelona, Berlin, Paris and London.

Here’s another video of the arrest.