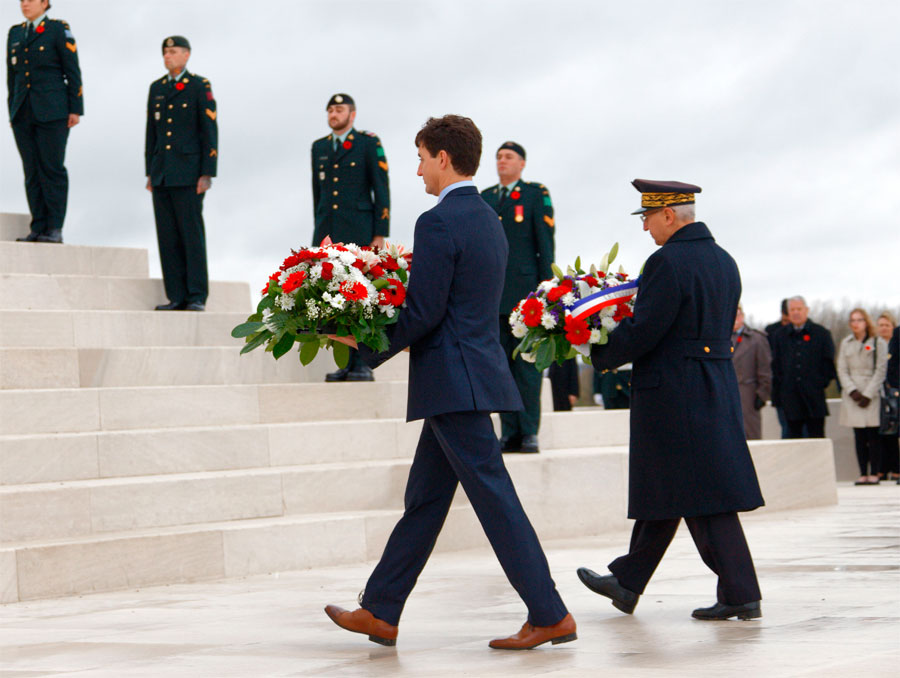 A gathering of world leaders, including Canadian Prime Minister Justin Trudeau, met in Paris on Nov. 11 to mark the 100th anniversary of the end of the First World War.

The day before, Trudeau and Minister of Veteran Affairs Seamus O’Regan visited the monument at Vimy Ridge which is dedicated to Canadian soldiers who sacrificed their lives in the Great War. In total, it left 66,000 dead and more than 170,000 wounded. “You stand for the values upon which Canada was built, values like democracy, equality, justice and liberty,” Trudeau said after he and O’Regan walked in the rain through the newly opened Vimy Centennial Park.

“You risked it all to help the most vulnerable and free the oppressed. You chose to live your life in service of others driven by profound sense of duty and for that, Canadians can never thank you enough.”

The next day in Paris, amidst a heavy rain, 60 world leaders, including German Chancellor Angela Merkel, French President Emmanuel Macron and Trudeau gathered at the Aisne-Marne American cemetery outside of Paris, to pay their respects to the fallen If you look closely at the picture above, one leader you won’t spot is U.S. President Donald Trump. That’s because the Commander-in-Chief pulled a no-show at the big Armistice Day event, the White House blaming his absence on “heavy rain” that grounded his helicopter. Apparently Trump chose not to go by motorcade instead because he didn’t want to cause a traffic snarl: “that kind of unexpected disruption to the city and its people.”

Trump, who often touts himself as a champion of the military, is taking major criticism at home and abroad for his missed engagement. Many, including former U.S. Secretary of State John Kerry, said the soldiers had to battle a lot more than rain in the “cause of freedom.” Even Winston Churchill’s grandson Nicholas Soames got into the act, calling Trump pathetic for missing the ceremony.

After spending the day honouring the fallen soldiers, the world leaders gathered to attend a peace forum sponsored by Macron.

Many of the leaders who spoke at the forum took veiled shots at the U.S. President, saying that the First World War and the Second World War were caused by a similar type of nationalism to the one Trump espouses. “The concern I have is that blinkered nationalist views may gain ground once again,’ said Merkel.

“The traces of this war never went away,” said Macron. “The old demons are rising again. We must reaffirm before our peoples our true and huge responsibility.”

“Patriotism is the exact opposite of nationalism,” he said through a translator. “Nationalism is a betrayal of patriotism. By saying our interests first, who cares about the others, we erase what a nation holds dearest, what gives it life, what makes it great and what is essential: its moral values.”

Macron latter tweeted out a picture of his address to the world leaders saying: “United for Peace.” Trudeau used the moment to speak about attacks on the media. “There have always been tensions between those who would speak truth to power and those who like having their power, thank you very much, and don’t necessarily want to see it frittered away. But we are now in a phase where that capacity to speak truth to power, the very capacity for a citizen to engage with truth, is under attack. And not just by the powerful, but by those who would see our institutions themselves weakened.”

Trump also gave the peace forum a miss, instead attending Suresnes American Cemetery and Memorial in the suburbs of Paris.