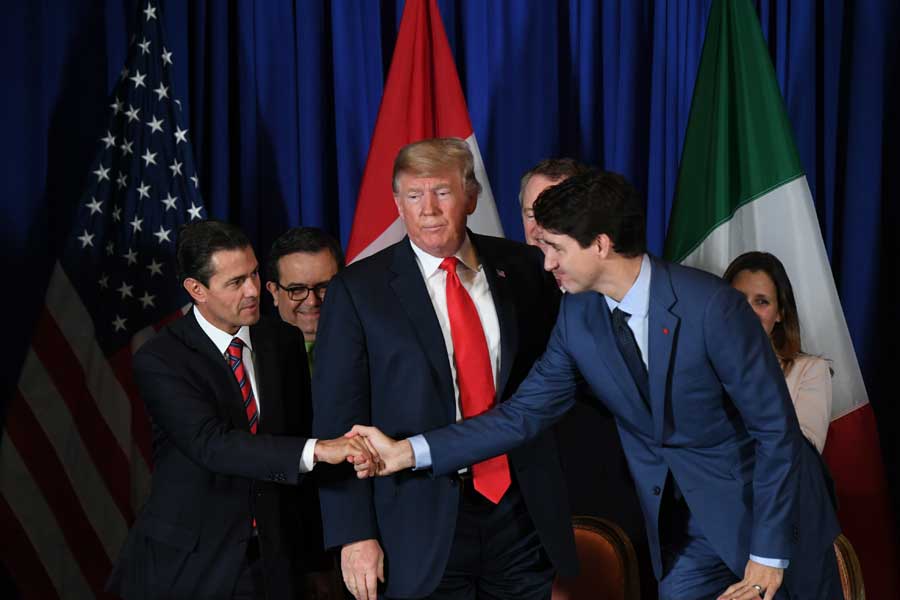 Prime Minister Justin Trudeau joined U.S. President Donald Trump and Mexican President Enrique Peña Nieto in signing the USMCA, known as the “new NAFTA,” during a ceremony on the sidelines of the G20 Summit in Buenos Aires on Friday.

Trudeau said he signed the deal to preserve the stability of the Canadian economy and lift the uncertainty that surrounded the 15-month long negotiation process, which he claims would have only gotten worse. He also says the deal ensures most Canadian exports remain tariff-free.

Referring to the agreement as the “new NAFTA,” the prime minister praised the deal for its role in protecting jobs and strengthening the middle class.

Trump, who was a proponent of changing the name of the NAFTA, said the new agreement “changes the trade landscape forever” and highlighted provisions in the deal that he claimed would “bring back” automotive manufacturing jobs and benefit American farmers.

Despite the long negotiation process that sparked what some called a “tariff war” between Canada and the U.S, Trump referred to Trudeau as a friend after the deal was signed.

“Battles sometimes make great friendships,” Trump said. “We’ve taken a lot of barbs and a little abuse, and we got there. It’s great for all of our countries.”

Although, Trump’s refusal to immediately eliminate his tariffs on Canadian steel and aluminum still hung heavily over the deal even as it was signed. According to the Toronto Star, Canada’s ambassador to the U.S., David MacNaughton, had suggested that Trudeau might refuse to attend a ceremony unless the tariff issue was resolved.

After signing, Trudeau brought up the General Motors factory cuts to broach the subject of the aluminum and steel tariffs. Calling the factory closures a “heavy blow,” he addressed Trump directly.

“Donald, it’s all the more reason why we need to keep working to remove the tariffs on steel and aluminum between our countries,” Trudeau said.

While the agreement struck between the three leaders is a major accomplishment, plenty of uncertainty still remains around the newly inked deal.