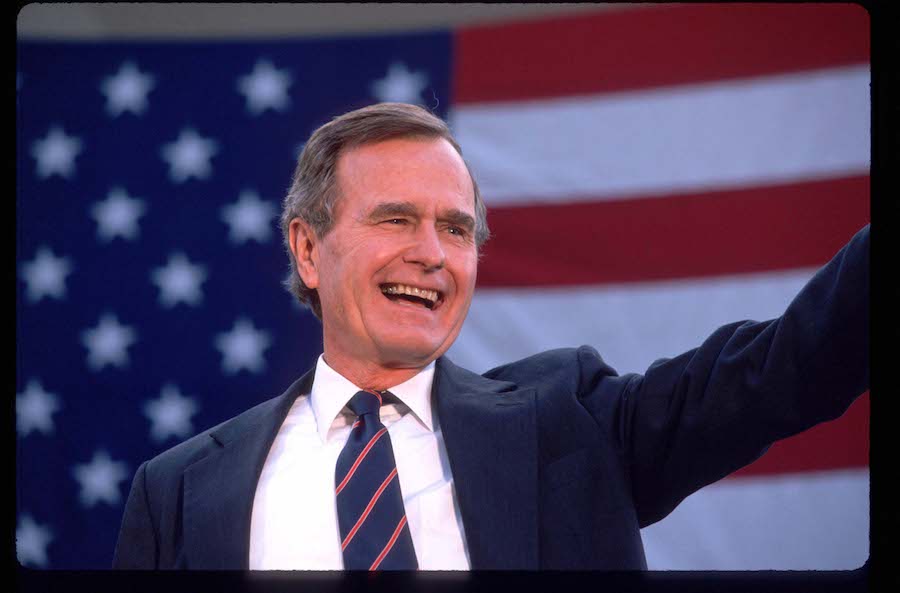 Former President George H.W. Bush is perhaps best remembered for two moments: his infamous election promise, “Read my lips, no new taxes” and for sending troops into Kuwait in 1991 in the Gulf War.

While he won the war, Bush broke his election promise, and ended up losing the next election to Bill Clinton. However, despite only serving four years in office, he is remembered by some as being “far and away the most consequential president in U.S. history.”

On Nov. 30, George H. W. Bush passed away at the age of 94 at his home in Houston, Texas. His beloved wife of 73 years, Barbara Bush, passed away nearly eight months earlier. Examining the legacy of George H. W. Bush, the 41st president and father of the 43rd, George W,  from the context of the cultural and political wasteland that permeates American politics and policy of reality-show star Donald Trump era, the more fitting words to describe Bush are decency, patriotic and dignified.

He will be the last president from the Greatest Generation, those men and women who fought and won the Second World War. Everything Bush said or did was rooted in the unshakeable assumption that America was the greatest country in the world. This fervent belief in American exceptionalism typified – and will perhaps die out – with his generation of public servants.

Born in 1926 into a wealthy family, Bush did not take the easy way out in life, choosing to dedicate himself to public service. And when war came to American shores in Pearl Harbour in 1941, he answered his country’s call to arms, serving in the U.S. Navy as a naval aviator at the age of 19 and would go on to win the Distinguished Cross for Heroism.

He was a career politician, serving as a Congressman, Director of the CIA and later and most notably, as former President Ronald Reagan’s vice-president. Riding on the the Reagan’s popularity, he won the 1988 presidential election.  As President, he was renowned as a statesman and sought and found a global alliance on which to invade Kuwait. He was also instrumental in bringing about the end of the Cold War, working with Russian leader Mikhail Gorbachev to tear down the Berlin Wall. On a domestic level, he often made mention of his “thousand points of light” theme, which he used to describe the way individual citizens could improve society.

President Donald Trump, as well as former presidents and politicians from all sides of the political spectrum joined in the outpouring of praise for the life of service led by Bush Sr. A state funeral will be held on in Washington on Dec. 5 and, in a demonstration of Bush’s ability to unify his nation, current U.S. President Donald Trump is invited to attend, despite grave differences and even dislike between the two families.

Former Canadian Prime Minister Brian Mulroney will give one of three eulogies at the funeral. Mulroney’s time in office overlapped with Bush’s, and the two remained friends. Mulroney told reporters after learning of Bush’s death, “President Bush had become one of those statesmen about whom history’s judgment rises every year. It was my privilege to have worked with him on an array of world-changing policy achievements,” Mulroney said, listing German re-unification and NAFTA as examples.

Unlike the current testy relationship that exists between Donald Trump and Prime Minister Justin Trudeau, Bush and Mulroney got along famously. “He understood the country,” Mulroney told CTVNews. “And wanted to help us and did in many major areas.”

Michelle Obama cancelled her book tour to Europe because she felt that, at this time, it was “extremely important to join the Bush family.”

George H. W. Bush will be laid to rest in Texas beside his wife, Barbara, and a child, Pauline “Robin,” who passed away at the age of three.