Ceiling And Visibility Unlimited: What George H.W. Bush Taught Us About Aging 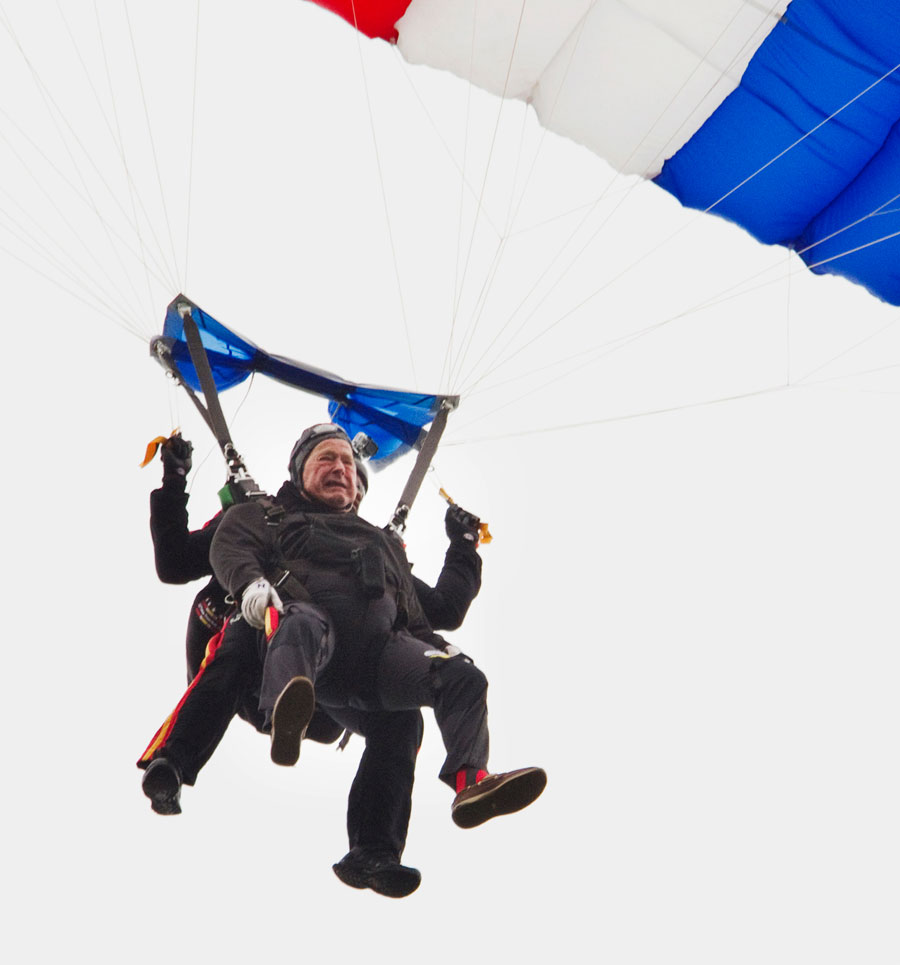 Many will remember the image of the service dog Sully lying in front of the casket of the 41st president of the United States, George H.W. Bush, who died at 94 on Nov. 30 – seven months after his wife of 73 years, Barbara, did – before he made his final journey to Washington, D.C., to lie in state at the U.S. Capitol Rotunda. But the more meaningful image is that of 95-year-old – and like Bush – Second World War hero and former U.S. Senator Bob Dole.

Permanently injured in the war, with a limp right arm and a hand that does not work and now using a wheelchair, he among thousands of others arrived at the Capitol to pay his respects. Assisted by a caregiver, a resolute Dole struggled to his feet to give his former commander-in-chief as emphatic a final salute as he could (photo below). It seemed to last less than a second before he sank back into the chair and was a living testament to the guts, resilience and grace that typified the way that Bush himself lived his final years. Bush, who in 1990 signed the Americans With Disabilities Act 9 (that nation’s first civil rights law prohibiting discrimination) into law, also used a wheelchair in the last decade of his life due to a form of Parkinson’s. “My legs no longer work,” he wrote matter-of-factly  — a faithful and prolific pen pal, he kept up a robust correspondence with a wide variety of friends, associates and former staffers who for the most part remained close to “Bush World.” In 1998, he wrote to his five children: “Last year there was only a tiny sense of time left, of sand running through glass. I want to put this aging on hold for a while now. I don’t expect to be on the A-team anymore, but I want to play golf with you and I want to fish and throw shoes and I want to rejoice in your victories and I want to be there for you if you get a bad bounce in life and no doubt you will for indeed the seas do indeed get rough.”

The next year for his 75th birthday, he jumped out of a plane. After his death, it was reported that he almost died during that jump, as he nearly did as a 20-year-old when he bailed out of the airplane he was piloting when it was shot down over the Pacific. He was fished out of the water by a U.S. naval submarine, but his two fellow crewmen died. The question “Why me?” regarding his survival motivated him though his unparalleled record of public service – serving as senator, ambassador to the UN, ambassador to China, director of the CIA, among other political and policy roles. Undeterred by the near-death incident in 1999, Bush would well into his later years race his power boat, the Fidelity, from his beloved Walker’s Point in Kennebunkport, Maine, across the Atlantic with the Secret Service in a follow boat trying desperately to keep up. Bush again went sky-diving for his 80th, 85th and 90th birthdays, arriving for his last jump in his wheelchair.

No wonder that in his eulogy for his father, the 43rd President of the United States, George W. Bush, said “Poppy” Bush had two speeds in life: “full throttle and sleep.” And humorously describing his father’s life philosophy as “to die young as late as possible.” Another life philosophy could well be what former Prime Minister Brian Mulroney noted in his deft yet whimsical eulogy of his old friend and global partner: CAVU, the acronym used by naval pilots and meaning Ceiling and Visibility Unlimited,  which was on a plaque at the Bushes’ Maine home. A study in the Journal of the American Medical Association found that the majority of American presidents have lived longer than typical men of their times, despite the high-stress nature of their job, with their longevity being correlated with high social standing. But we also know that longevity is tied to many other things, such as social engagement, a sense of purpose – Bush’s ode to volunteerism, his “thousand points of lights” – are an enduring example he set. And, of course, humour. 43 said his father placed value on a good joke even though another eulogist, former senator Alan Simpson, revealed he could never remember a punchline. But Bush wore his famously quirky novelty socks to the end.