Sleaze, Dirty Politics and Blackmail: Bezos Vs Pecker Is A True Trump-Era Scandal 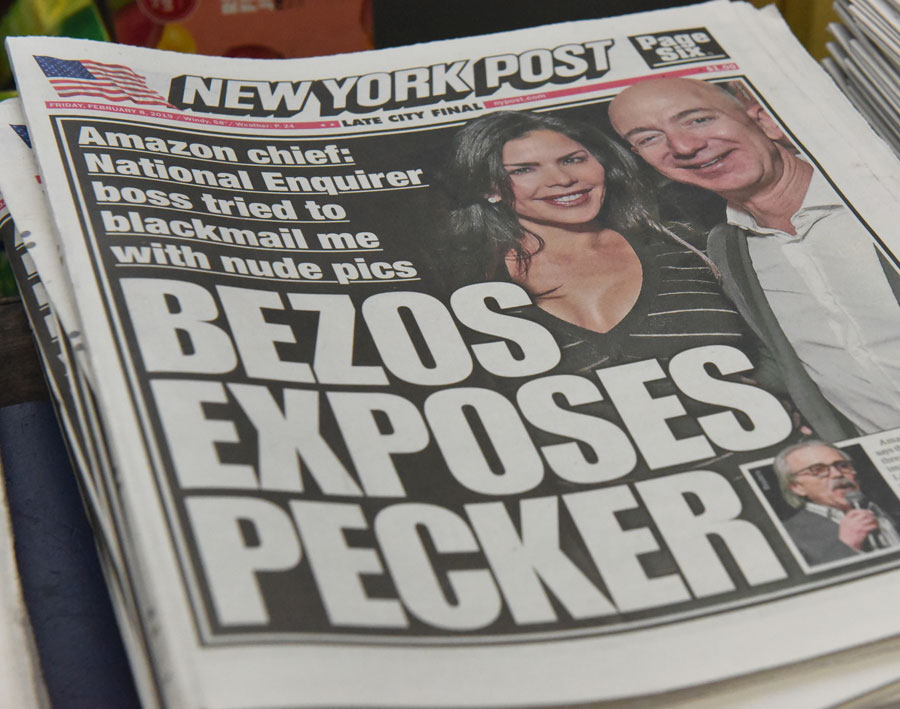 The New York Post has some fun with the Jeff Bezos vs. David Pecker scandal. (Photo: Stephanie Keith/Getty Images)

Jeff Bezos, the world’s richest man, published a remarkable online post last night claiming that he is a victim of “extortion” and “blackmail” by the company that publishes the National Enquirer.

As with all controversial stories in this day and age, this one is inevitably tied to U.S. President Donald Trump. And as is typical of all Trump-era scandals – it’s an unholy cauldron of ego, sleaze, dirty politics, blackmail, personal invective, back-stabbing and threats, a story that truly befits the Trump era.

It’s also somehow transformed Bezos, the billionaire owner of the Washington Post and founder of Amazon (a company that’s killing retail and putting thousands out of work) into a figure of sympathy. And it’s made David Pecker, CEO of American Media Inc. (AMI)—which publishes trashy tabloids like the Enquirer—even more reviled than was previously thought possible.

Here is a breakdown of the whole ugly mess.

Birth of a scandal

The National Enquirer somehow obtains a series of “compromising” texts and nude photos that were shared between the then-married Bezos and his girlfriend Lauren Sanchez. When the Enquirer was about to break the story about the Amazon chief’s infidelity, Bezos and wife MacKenzie Bezos abruptly went public announcing they were getting divorced.

Bezos goes on record claiming that AMI’s coverage of his infidelity and subsequent marriage breakdown was politically motivated, suggesting that the Enquirer was indulging in a form of revenge journalism on behalf of the President. His reasoning? Ties between the President and the Enquirer became public in December when the tabloid admitted to federal prosecutors that it had paid $150,000 in hush-money to a playboy playmate who claimed to have had an affair with Trump.

Bezos asks his security chief, Gavin de Becker, to launch a probe to find out how AMI got the photos and texts and to determine if the company had any links to the Trump administration. The probe focussed on the “deep relationship” between AMI-chief Pecker and Trump, claiming that the publisher and Trump had a “catch and kill” agreement, suppressing negative news against the President. The probe also explored AMI’s cozy relationship with Saudi Arabia, to go along with the Washington Post’s ongoing investigation into Trump’s ties with the Crown Prince .

Pecker, apparently alarmed at the probe, sends a series of emails (through AMI’s legal department) to Bezos saying that unless he and de Becker stop publishing “false, vicious, speculative” claims [about AMI’s coverage being politically motivated] and issue a statement saying “they have no knowledge or basis for suggesting that AM’s coverage was politically motivated or influenced by political forces” then the National Enquirer would go ahead and make the embarrassing photos and texts of Bezos public.

Bezos publishes his now viral online post, titled: “No Thank You, Mr. Pecker” in which he says he won’t bow to “extortion” and “blackmail.” He publishes all the AMI emails that threaten to release the compromising material saying he won’t back down: “If in my position I can’t stand up to this kind of extortion, how many people can?”

On Friday, AMI releases a statement saying that in spite of Bezos’ allegations, it was operating “in good faith negotiations to resolve all matters with him.” However, the company said it would also “promptly and thoroughly investigate the claims. Upon completion of that investigation, the Board will take whatever appropriate action is necessary.”