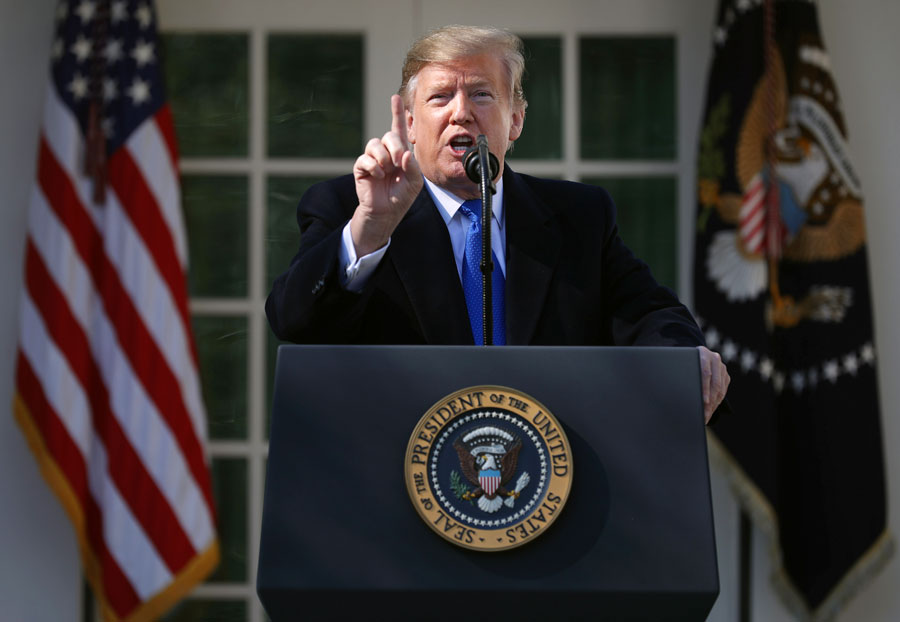 U.S. President Donald Trump speaks about his plans to declare a national emergency to fund his border wall during a Rose Garden event at the White House February 15, 2019 in Washington, DC. (Photo: Chip Somodevilla/Getty Images)

President Donald Trump confirmed this morning that he will be declaring a national emergency to repurpose funds from other parts of the government to build his proposed border wall without congressional approval.

News of the move came last night with the president slated to sign a government spending and border security plan to prevent a partial government shut down on Saturday. Trump had pushed for lawmakers to approve allocation of $5.7 billion to build the border wall, but Congress passed only $1.375 billion for the construction of a new bollard fencing on 55 miles of the U.S.-Mexico border.

“I’m going to be signing a national emergency, and it’s been signed many times before, by many presidents. It’s rarely been a problem … nobody cared,” the president said during remarks in the White House Rose Garden on Friday.

Chief of Staff Mick Mulvaney told reporters Friday that the declaration will allow President Trump to allocate $8 billion to the construction of the wall, which will include the $1.375 billion appropriated by Congress. Another $600 million will come from the Treasury Department’s drug forfeiture fund and the rest will come from The Department of Defence, with $2.5 billion taken from the military’s fund for counter narcotic activities and $3.6 billion taken from the military construction budget.

Senate Majority Leader Mitch McConnell announced on the Senate floor Thursday that the president had indicated he would be signing both the bill from Congress and the emergency declaration.

In further remarks on Friday Trump justified the move, claiming the U.S. was facing an “invasion” and that the wall was necessary to hold off traffickers of people and drugs.

However, according to data from U.S Customs and Border Protection, illegal crossings at the U.S.-Mexico border are at their lowest levels in nearly 50 years.

While the declaration has precedence, Trump already faces opposition form House Democrats who have threatened legislation to block the move.

“Declaring a national emergency would be a lawless act, a gross abuse of the power of the presidency and a desperate attempt to distract from the fact that President Trump broke his core promise to have Mexico pay for his wall,” Pelosi and Schumer said in a statement Thursday. “This is not an emergency, and the president’s fear mongering doesn’t make it one.”

During a press conference on Friday, Trump seemed aware of the opposition he would face and expressed hope for a positive ruling from the Supreme Court, where he predicts the matter will end up eventually.

According to Mulvaney, two former presidents have activated these emergency funds: Once in 1990 for Operation Desert Storm to liberate Kuwait following an Iraqi invasion and a second time in November of 2001 for the American military campaign in Afghanistan following the 9/11 attacks.