How Much History Will Remain When Notre-Dame Cathedral Is Restored? 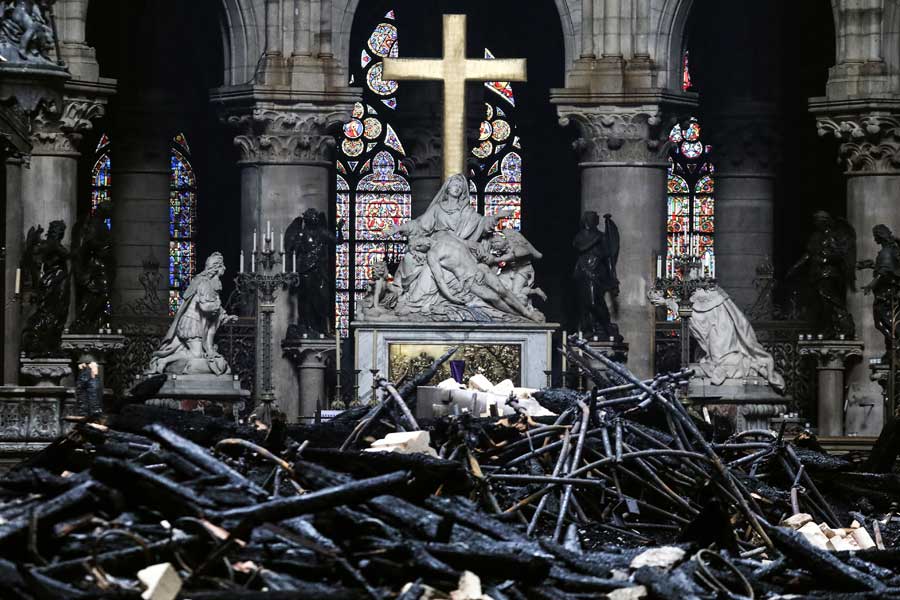 inside the Notre-Dame Cathedral in Paris in the aftermath of a fire that devastated the cathedral. (Photo: Ludovic Marin/AFP/Getty Images

As the smoke clears around Notre-Dame Cathedral in Paris, many have turned their attention to what was saved in the devastating fire that ripped through the historical structure and collapsed its spire.

The good news is that the structure of the 12th-century Cathedral is still intact, which leaves hope for a the reconstruction of the UNESCO World Heritage site.

Bertrand de Feydeau, vice-president of preservation group Foundation du Patrimoine, told France Info radio that the roof in particular would likely have to be constructed with new technologies.

He says the lattice of wooden beams in the attic — known as “the forest” — that went up in flames were built more than 800 years ago from trees that no longer grow in France.

Ironically, a refusal to modernize Notre-Dame Cathedral may have contributed to the devastating blaze. According to the New York Times, the structure lacked the fundamental fire-prevention safeguards, which are required in modern buildings and have been installed in other ancient cathedrals in Europe.

Some of those elements, including firewalls or sprinkler systems, were not installed by choice so as not to compromise the landmark’s design or introduce electrical wiring that would also put the structure at risk of fire.

“There had been a systematic refusal to install anything electrical [within] the forest,” Pierre Housieaux, president of the Paris Historical Association told the New York Times. “Everyone knew that the attic was the most fragile part.”

While the devastation caused by the blaze and the eventual rebuild of the site will strip the Cathedral of much of its historical enchantment, a number of the site’s prized artifacts survived.

Saved from the fire were a collection of artwork and holy objects including the cathedral’s most precious relic, the Crown of Thorns, believed to have been worn by Jesus Christ at his crucifixion.

And serendipitously, the sculptures of the Twelve Apostles and four New Testament evangelists escaped their fiery fate when they were removed from the spire for restoration just days before the blaze.

The restoration plans for their eventual resting place, however, remain on hold. According to Notre-Dame’s rector, the cathedral will be closed for five to six years—around the same amount of time French President Emmanuel Macron says it will take to rebuild it.

Meanwhile, those in charge of the rebuilding project are debating whether they should strive for historical accuracy or embrace a new cultural aesthetic. If the international architects’ competition to rebuild the spire (recently announced by French Prime Minister Édouard Philippe) is any indication, they may decide to take the latter route.

“The international competition will allow us to ask the question of whether we should even recreate the spire as it was conceived by [French Architect] Viollet-le-Duc,” Philippe told reporters.

“Or if, as is often the case in the evolution of heritage, we should endow Notre-Dame with a new spire.”