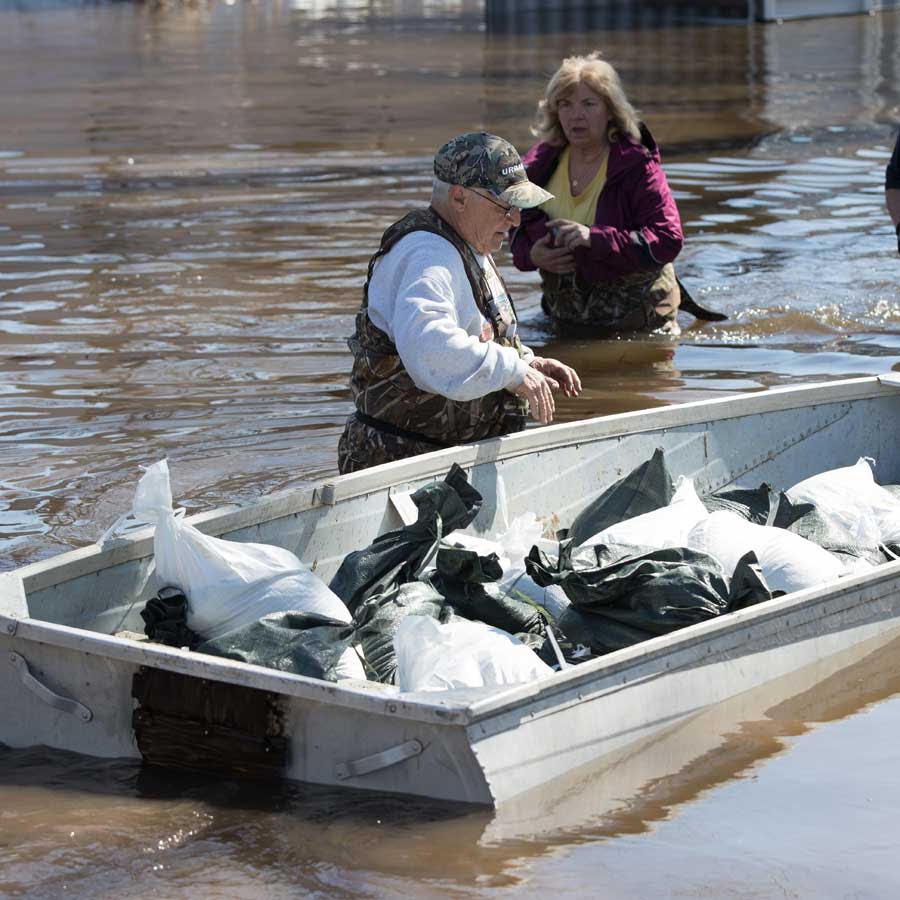 A man moves a boat full of sandbags to help with the flooding in Constance Bay, west of Ottawa. (Photo: Lars Hagberg/AFP/Getty Images)

“We expect that we still have a couple of days to suffer,” said Quebec Premier François Legault yesterday. “So I’m asking for everyone’s courage,” speaking to residents of small towns whose lives have been turned upside down by the deluge of water.

Experts are saying that some relief is on the way for Eastern Canada, especially Quebec, which has been pummelled worse than usual this year by the spring thaw, with dams, bridges and roads being washed away by the rising waters. In Quebec alone, over 10,000 people have been forced to leave their homes and watch their personal belongings destroyed or carried away by the raging waters.

While the worst may be over in Quebec and New Brunswick, there’s now a new concern that all that water flowing downstream will swell the levels of Lake Ontario. Yesterday, officials issued warnings to residents along the shore of Lake Ontario that waters will continue rising in May and June.

The Toronto and Region Conservation Authority issued a new warning yesterday warning people to stay away from rivers and streams:

All shorelines, rivers and streams within the GTA should be considered hazardous. Impacts to beaches (ie: shortened beaches, dynamic beach effects) can be expected, as well as increased erosion along the Lake Ontario shoreline. Properties along the shoreline and the Toronto Islands which experienced flooding during the 2017 event could begin to experience flood impacts as the water level in Lake Ontario continues to rise.

As emergency agencies in the affected provinces and municipalities try their best to cope, they’re often overwhelmed by the scope of the floods. And, as is often the case in these natural or man-made disasters, older residents — many of whom live alone and have health or mobility issues — are least able to cope with the disruption these events cause.

Thankfully, only one fatality has occurred so far in this year’s floods. But unfortunately, it was a senior. In the Outaouais region, Louise Seguin Lortie, a 72-year-old woman, was killed when her car was sucked into a massive sinkhole created by the flooding of the Ottawa River.

To avoid a similar tragedy that occurred in a seniors home in Texas in 2017, where floodwater caused by Hurricane Harvey flooded a a seniors’ residence, emergency crews were able to evacuate 100 residents from the Château Saint-André seniors’ home before they were deluged by flooding waters from the Petite-Nation River.

This is no different from other natural or man-made disasters, where older residents are inordinately hard hit. In the terrible flooding at Hurricane Katrina in 2005, 70 per cent of the 1,800 killed were over the age of 60. When Hurricane Sandy hit shore in 2012, half of the fatalities were seniors.

Besides the negative impact on older people, these disasters have left experts scrambling for answers as to what’s causing these so-called “100-year floods,” which seem to be happening with alarming regularity.

Blair Feltmate, head of the Intact Centre on Climate Adaptation at the University of Waterloo, feels that because we’ve paved over so much of our green spaces, the land can no longer absorb heavy floods.

“Here in Ontario — and the trend is the same right across Canada — we’ve lost 73 per cent of the original, natural infrastructure that was here 100 years ago: forests, fields, wetlands, marshes,” Feltmate told the CBC. “That’s disappeared. That’s either been paved over or turned into agricultural development such that when the big storms hit, water isn’t absorbed quickly on these new surfaces,” Feltmate told the CBC.

Even Ontario Premier Doug Ford admitted that climate change may be behind the latest disasters. “They say it’s 100-year storms — well it’s a few years later and we’re back in the same boat,” Ford told reporters. “Something is going on and we have to be conscious of it.”

The Red Cross is asking for donations to help its efforts to coordinate emergency relief efforts and get help to people in affected areas as quickly as possible.