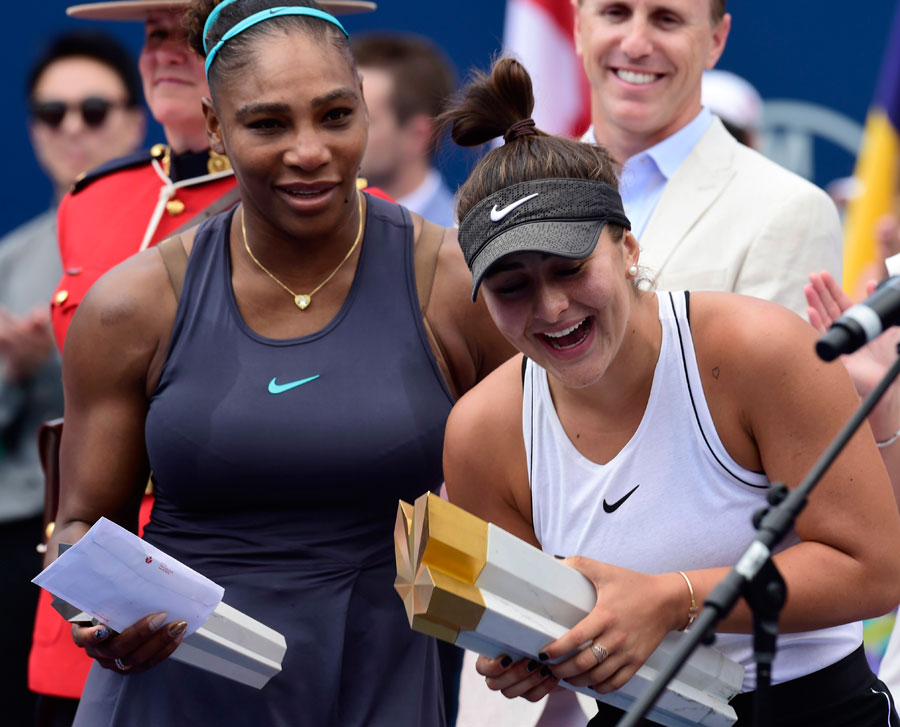 Emotions ran high at the Rogers Cup Canadian Open women’s singles finals in Toronto on Sunday as 19-year-old rising home-grown star Bianca Andreescu defeated Serena Williams after the 37-year-old tennis icon was forced to withdraw after only four games because of injuries.

In winning the match, Andreescu, a native of Mississauga, Ont., becomes the first Canadian in 50 years to capture the tournament (then called the Canadian Open). “It’s not the way I wanted to win, but a win is a win,” she said following the victory. “So I’m really, really happy.” Although the youngster barely seemed caught up in the moment, you could see she was overjoyed by the smile that never left her face.

After falling behind 3-1 in the first set, Serena, who was clearly labouring throughout the match, started crying on the bench, knowing that she would have to withdraw. When she told the umpire she could no longer continue, Andreescu walked over to Williams, gave her a hug and tried to console her.

Courtside microphones picked up the touching exchange between the two players — the aging Williams who is drawing to the end of a fabulous career and the youthful Andreescu, whose future is blindingly bright.

Coming over to the sobbing Williams, the youthfully effervescent Andreescu: “I’m so sorry. Are you ok? Dude…don’t even get me started. I’ve watched you your whole career. You’re a beast…this sucks, right? You’re going to bounce back.” She then embraced her idol and the crowd burst into applause at the display of sportsmanship, which is rare in tennis.

This enchanting teenage pep talk managed to get Williams smiling and laughing, and afterward, when Serena addressed the crowd, fighting back tears, she spoke highly of her young opponent.

Andreescu has battled injuries herself, including a shoulder problem which kept her out of Wimbledon this year. She knows what Serena is going through

“I’m sorry I couldn’t do it today — I tried. Bianca, you’re a great sportswoman. It’s been a tough year, but we’ll keep going. And she had high praise for her young foe. “She definitely doesn’t seem like a 19-year-old in her words, on court and her game, her attitude, or her actions. I’m officially a fan.”

Williams has struggled to regain her top form after the birth of her child two years ago and has battled injuries. She hasn’t won a tournament since 2017 and knows the end of her career is drawing near.

Although withdrawing from the finals was a bitter disappointment, Andreescu’s actions helped ease the pain. For Williams, the Rogers Cup would have been nice but her focus clearly lies on winning next month’s U.S. Open, which would be a suitable ending to her amazing career.