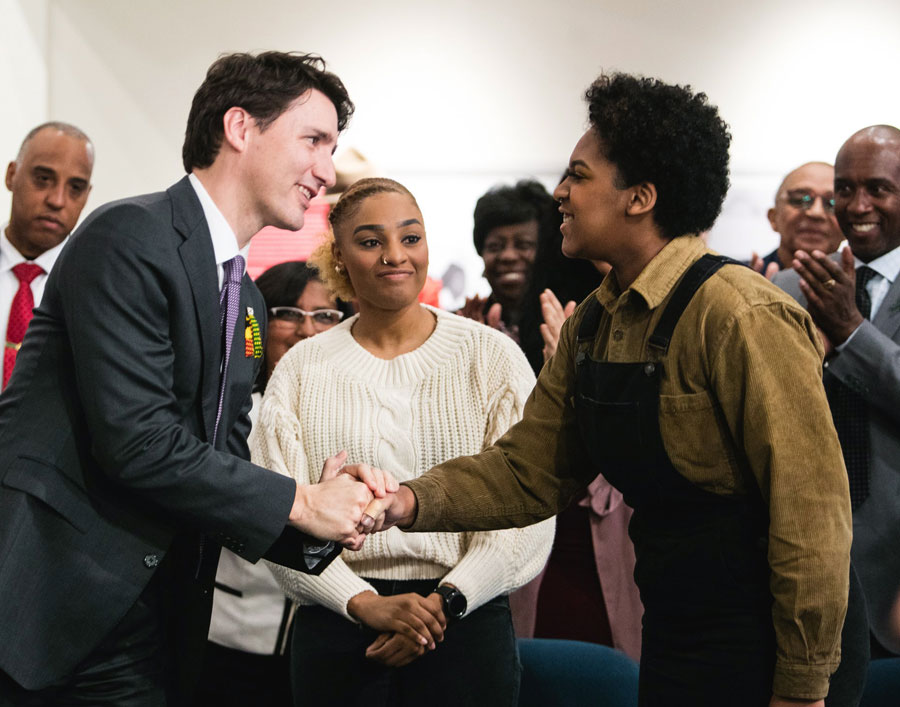 Prime Minister Justin Trudeau grasps the hand of Keona Simmons during a media availability at the Black Cultural Centre For Nova Scotia in Dartmouth N.S., on Feb. 21, 2019. (Photo: The Canadian Press/Riley Smith)

As we mark Canadian Multiculturalism Day in Canada on Saturday, we’d be remiss if we didn’t mention that our nation, for all of its embracing of its multicultural identity, still has its failings in that regard. Last week, NDP Leader Jagmeet Singh was ousted from the House of Commons after calling Bloc MP Alan Therrien a racist for refusing to support a motion addressing systemic racism in the RCMP. And yesterday, a Toronto police officer was found guilty of assaulting a Black man named Dafonte Miller in Whitby, Ont., in 2016. The beating blinded Miller, 22, in his left eye and prompted the judge in the case to note that such incidents “raise significant issues involving race and policing that should be further examined.”

And, of course, there are the anti-racism protests that have taken place across the country. At one of those protests, in Ottawa, Prime Minister Justin Trudeau appeared and took a knee in solidarity with the protesters.

But long before those events, Trudeau ignited anger and discussion in Canada when, during the 2019 federal election campaign, images of him in blackface and brownface surfaced. At the time, Zoomer turned to El Jones, a Halifax-based spoken word poet, Mount Saint Vincent University professor, journalist and a Black community activist, who wrote about dehumanizing stereotypes like blackface and the need to address “the ongoing policy decisions that mark us as less than Canadian and make us the subjects of debate.” Today, we revisit the essay Jones wrote for Zoomer below.

In February, following an incident where Black youth visiting Parliament Hill were racially profiled by a security guard in the parliamentary cafeteria, Justin Trudeau came to the Black Cultural Centre for Nova Scotia a few kilometres east of Dartmouth in Cherry Brook.

He apologized to some of the youth behind closed doors and then spoke to community members. The incident, he said, showed “anti-Black racism exists, that unconscious bias exists, that systemic discrimination exists in this country today, still.”

I was not invited to the cultural centre. Instead, along with community elder Lynn Jones, the sister of Black Canadian civil rights legend Burnley “Rocky” Jones, I was outside protesting.

Lynn Jones wanted the community to make visible the inequality that still exists for Black Canadians and for African Nova Scotians as detailed in the 2017 United Nations report that described racism in Nova Scotia as “deplorable.” Lynn wanted more than an apology, she wanted concrete action.

I can’t say that our protest was popular with the wider community. My more radical friends across Canada, critical of Trudeau’s policies (or lack of policy) around Black people, texted me with “apology not accepted.” And now, as Trudeau apologizes for two incidents of wearing blackface, as well as two 2011 images in which he is smeared in brownface at an Arabian Nights gala at the Vancouver private school where he taught, there is suddenly a national conversation about Trudeau, anti-Blackness, and racism.

Those of us who repeatedly point out that Black people under Trudeau face high incarceration rates, are victimized by immigration detention and deportation, have their children disproportionately seized by child welfare and are marginalized in housing and by poverty might feel vindicated that our criticisms are being validated.

Except the conversation is focused more on Trudeau’s personal behaviour, followed by whether his apology was good enough and whether we should forgive him and vote for him anyway, than it is around what Trudeau’s repeated performance of racial stereotypes says about the wider structures of racism in Canada.

This discussion is, of course, taking place during an election campaign against a background of billboards with the image of Maxime Bernier opposing “mass immigration.” Jagmeet Singh faced questions about whether a Sikh man in a turban can lead a political party, as seen in the defections from the NDP in New Brunswick. It is notable that Justin Trudeau — prime minister of a country that claims to hold multiculturalism and diversity as foundational values — does not think his professed ignorance of racism disqualifies him for leadership, while we still debate whether people who aren’t white can possibly represent all Canadians.

Trudeau suggested the four images of him in brown or blackface come from a time when there was less understanding of racism and this behaviour was more acceptable. The Arabian Nights picture dates from the same year as 9-11. That attack led to an ever-expanding state security apparatus and surveillance of Muslim people in the U.S. and in Canada under the Harper government’s Bill C-51. If 2001 was so long ago, then why are Muslim Canadians still struggling to get off the no-fly list?

These images matter. They are not “just costumes.” They reflect embedded stereotypes around Black people, Muslim people and people of colour. That you cannot wear a hijab in Quebec and teach in a public school while white people dress up in these costumes for fun tells us about the privilege and power of white people in this country. Justin Trudeau, of course, could remove the costume and wipe off the makeup. We live every day with the consequences of our skin colour, religion and ethnicity that cannot be removed so easily.

Race has been front and centre in this election. Increasingly we see anti-immigrant, white nationalist and racist discourse normalized and printed in editorials of major newspapers in this country. To say — as some commentators I have seen claim online — that there are more important issues in this election than the traffic in racial stereotypes and degrading racial imagery is to lack understanding of the history of blackface imagery and how these ideas about blackness continue to shape our society.

We are told blackface is an American phenomenon and doesn’t mean the same thing in Canada, where people continue to believe there is no history of enslavement. This ignorance of Canadian histories of slavery and of anti-Blackness is exactly what makes blackface costuming so damaging. When we have erased Black people from our narratives, it should be no surprise that reductive stereotypes take our place.

Blackface derives from minstrel shows and represents the most degrading, dehumanizing stereotypes of Black people as lazy, greedy and stupid. These views persist today in carding policies that target Black people as more likely to commit a crime, in education policies that result in the suspension and removal of Black children from schools and in stores where we are followed around as probable thieves. To wear blackface as a costume is to reduce Black humanity to nothing more than our skin colour and to present that skin colour as grotesque or, at best, as entertainment or a joke.

I have before me an account, discovered in the Acadian University archives by sociologist Claudine Bonner, from March/April 1918. Acadia is a university in Wolfville, N.S., the province with the longest history of Black settlement in Canada, which reaches back more than 400 years. Black soldiers served in the First World War, forming the No. 2 Construction Battalion, who dug latrines and trenches. And in 1918, as Black soldiers served this country, the campus newspaper includes a description of a “nigger minstrel show” staged at Acadia, “the best show of its kind put on here for some time.” The show, we learn, featured “23 coons.”

Blackface shows were common in Canada among elite groups like fraternities, university groups and clubs. For Justin Trudeau to engage in Blackface as both a student and a teacher at private schools in Montreal and Vancouver is nothing new for powerful white men in Canada. It is nothing new to see these images in private school yearbooks and newsletters.

And what is also not new is that every time race and racism become an issue, it is minimized, excused, and people of colour end up saddled with the burden of providing a “learning experience” or of generously moving on.

It does not matter to me if Trudeau apologizes or not, if he is really sorry or if other people have forgiven him. I am not interested in public relations, as though this becomes about how his brand has suffered. I am interested in the ongoing policy decisions that mark us as less than Canadian and make us the subjects of debate: whether there are too many of us, whether we share white values, whether we truly belong. The images of us, the stories told about us and the stereotypes we are burdened with matter. They are driving this election. To be told this is just a distraction is to once again relegate us to the sidelines while placing white people front and centre. And that is exactly why we need to have these conversations.