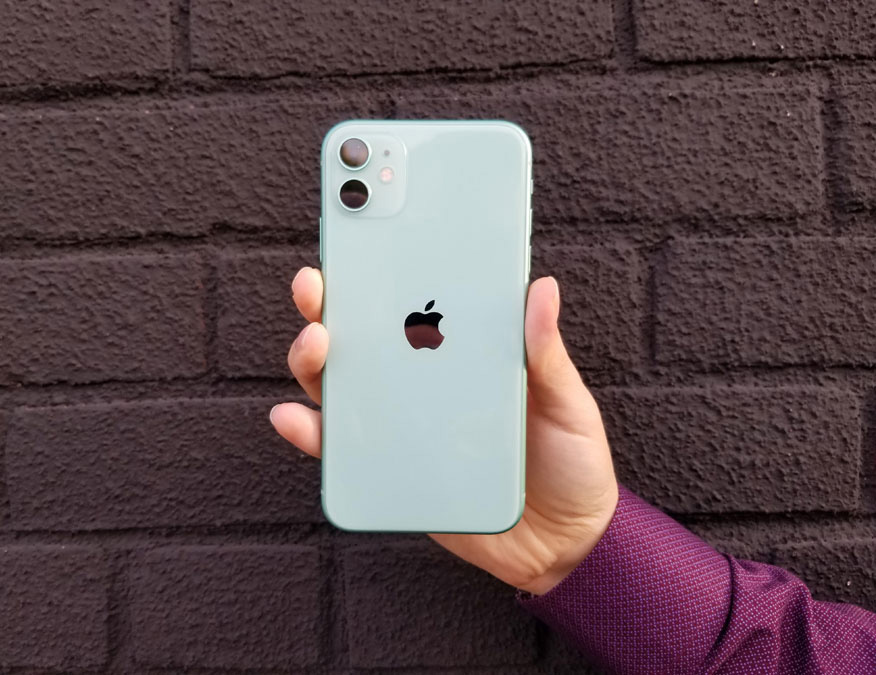 When it comes to smartphones, I’m usually a model or two behind, so it’s certainly not a shock that I noticed a difference between my LG 5’s camera and the dual lenses on the iPhone 11.

The considerably shallow learning curve was the surprise. Priced out of the iPhone game years ago, I half expected the muscle memory developed with Android devices to pose an issue.

But I found the phone’s highly touted camera system easy to navigate, and the price point, starting at $959, is more accessible too. The top-tier models, the iPhone 11 Pro and Pro Max, which both feature the hyped three lenses, start at $1,379 and $1,519 respectively.

The 11’s two-camera system,  new to the iPhone faithful as well, is loaded with features, ranging from useful tools like dark mode and wide-angle lenses to gimmicks like the ability to take slow-motion video from the front-facing camera, which Apple jokingly calls the “slofie.”

The quality of camera is likely the most important feature on a smartphone today, but reading through a list of specs and deciding whether they’ll make a difference in your snaps during family gatherings, vacations and the like can get tedious. That’s why I’ve done some of the thumb work for you.

Here are three camera features I found particularly useful on the iPhone 11.

The new iPhone features a wide lens and and ultra-wide lens, which Apple says allows the phone to capture four times more scenery than previous models. The ultra-wide option should come in handy when you’re trying to stuff your entire family into the frame or take a shot of a city skyline. It’s also great for tight quarters, where backing up from your subject to make it fit isn’t an option.

Pulling back to the ultra-wide view is as easy as a tap — or a pinch if you prefer — and because the two cameras are constantly sharing information with one another, switching between them is almost seamless.

Take a look at the photos below to see how much more I managed to fit into the frame using the ultra-wide option without repositioning the camera. Those dual lenses aren’t just for extra-wide shots, they also come into play while shooting video. The ultra-wide and wide cameras work together to support 4K video with extended dynamic range — which allows users to capture both the lightest and darkest segments of an image without losing detail —  and cinematic video stabilization.

While the clarity of the video was impressive, the cinematic stabilization was what stood out.

Whether it was smoothing out camera shake from my unsteady hand or capturing clear video of a fast-paced basketball game, this phone was up for the task. Reviewing the footage, I was often surprised at how well the camera adjusted to rapid movement of both the camera and subjects.

Have a look at the video I shot below and be sure to click on the gear icon in the bottom right corner of the player, then click on the quality setting and scroll up to 1080p60 or higher for a more accurate representation of the video.

And if you’re constantly fumbling to toggle between your smartphone’s camera and video, say during the grandkid’s soccer game, there’s the option to quickly record from camera mode by pressing and holding the shutter, which you can then lock in to video mode with a slide to the right.

Apple is hoping that their users will largely bid farewell to their flash with its new night mode, specifically designed for taking photos in low-light environments.

The device will automatically activate night mode when necessary, displaying a small half-moon icon in the top left corner while in camera mode.

Taking a photo in that mode, however, differs slightly from your average snap. Next to the half moon, the phone displays the amount of seconds needed for the camera to gather all the information and light necessary to produce a quality photo. Once you tap the shutter, you’ll have to hold the phone and your subject steady until the countdown (displayed on a sliding scale above the shutter) is complete.

While this sounds cumbersome, I found the camera only needed five seconds for shots that I took in a dark room lit by candlelight. I’m guessing most smartphone users have asked family members to stand still for more than five seconds after forgetting to turn on the flash or retaking photos that didn’t turn out. With this helpful feature, users should get the photo they want with less attempts.

And judging by some of the photos I took, the five-second wait was worth it.