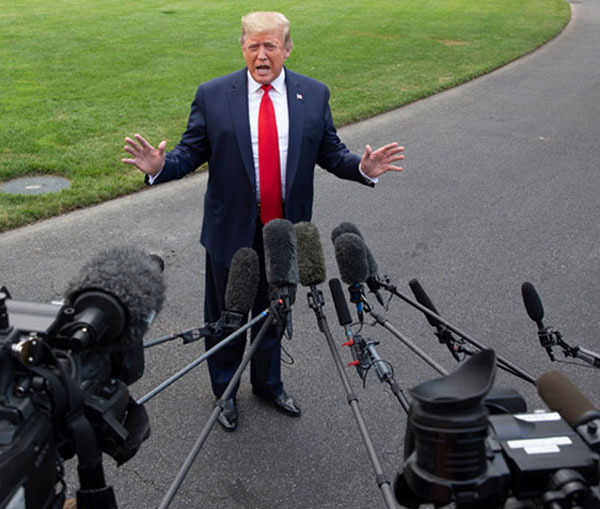 Donald Trump is once again fighting for his political life as Democrats launch an impeachment inquiry related to a phone call he made to Ukrainian President Volodymyr Zelensky. (Photo: Michael Reynolds/EPA-EFE/Shutterstock)

The threat of impeachment, which has dogged Donald Trump for much of his term in office, has once again flared up amid revelations this week that the U.S. President used his position in a blatant attempt to damage a political rival.

A transcript of a July telephone conversation between Trump and Ukrainian President Volodymyr Zelensky, released by the White House today, depicts a President using his influence and office to force a foreign power to operate on his behalf.

Yesterday, Democrat House Speaker Nancy Pelosi rejuvenated efforts to oust Trump when she announced she is launching an impeachment inquiry into whether the president acted illegally in the phone call he made to Zelensky.

The impeachment impetus stems from a “favour” Trump asked of Zelensky in the call to congratulate the Ukrainian leader on his election. Trump clearly requests Zelensky launch an investigation into the role former Vice President Joe Biden played in squelching a 2016 inquiry into his son Hunter, then a board member for Ukrainian energy company Burisma. This ignited a firestorm of criticism from those suggesting that Trump’s “favour” amounted to an attempt to undermine Biden’s campaign for the 2020 Democrat presidential nomination, thereby eliminating a popular rival from the field.

In the conversation, Trump tells Zelensky, “I would like you to do us a favour” before asking the Ukrainian President to work with Attorney General William Barr and Trump’s personal lawyer Rudy Giuliani “to get to the bottom” of the role played by the Bidens. The Democrats claim it proves the President acted illegally by using a foreign government to attack on one of his political adversaries, not to mention the optics of using his personal lawyer to do an end run around career diplomats.

Time magazine is reporting that a White-House insider claims  the President ordered a $400-million aid package to the Ukraine be delayed a week before the phone call to Zelensky. Democrats say this raises the possibility that when Trump tells Zelensky, “we do a lot for Ukraine. We spend a lot of effort and a lot of time,” he’s offering a quid pro quo — you’ll get the money once you investigate the Bidens.

Trump responded to the Pelosi’s impeachment inquiry in his usual fashion, first likening it to the “Russian Hoax” before rolling out his now familiar “witch hunt” line of defence.

A wild card in this rapidly developing story is the existence of a whistle blower who filed a complaint to the Inspector General of the Intelligence Community several months ago, which is believed to be related to Trump’s telephone call. While the complaint wasn’t followed up on at the time, Trump has reportedly said he will release it later this week.

A short history of impeachment

Impeachment does not actually refer to the removal of the President or government official from office. Rather, it is the process by which Congress levels charges against the President which could be for “abusing the powers of the office or for acting in a manner considered incompatible with the office.” The first step in the process is the House of Representatives investigation of the impeachment charges. Once completed, if a majority of the House votes for the articles of impeachment, it then goes to the Senate for a trial. If two thirds of the Senate votes for conviction, then the President is removed from office and Vice President Mike Pence assumes the role.