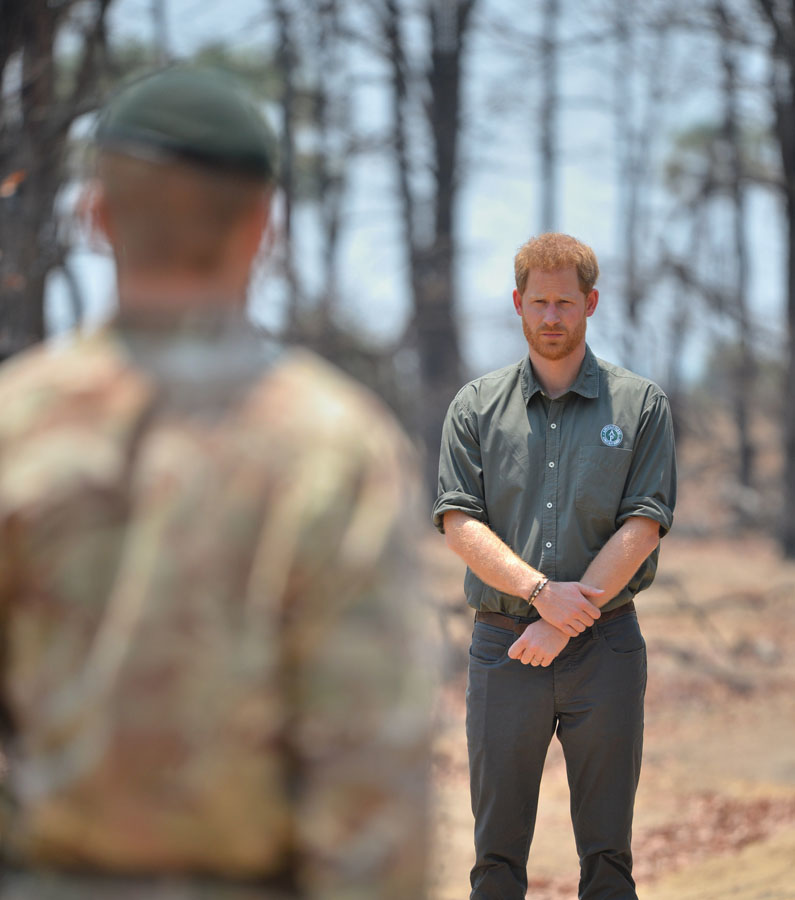 Prince Harry, Duke of Sussex pays tribute at the memorial site for Guardsman Mathew Talbot of the Coldstream Guards at Liwonde National Park in Lilongwei. Photo by Pool/Samir Hussein/WireImage

Harry, Duke of Sussex took in a unique view of Liwonde National Park in Malawi today: on his back, camera pointed up through the branches of a massive baobab tree and into the sky. Part of his takeover for the day of the National Geographic Instagram account, Harry is urging his followers on @SussexRoyal and @NatGeo to post their own shots of trees from the ground below.

The prince is asking readers to post their own shots of trees under the hashtag #LookingUp. This is a special opportunity to catch the attention of the Prince, who will be curating a selection of images from around the world to post on the @SussexRoyal site, which will be seen by 9.6 million followers.

“Looking Up” is a new social media initiative to raise awareness of the vital role trees play in the earth’s ecosystem, and an opportunity for all of us to take a moment, to appreciate the beauty of our surroundings and to share your own view, by looking up!” reads the the post on royalsussex, which is shared by both Harry and Meghan, Duchess of Sussex.

Harry arrived at Liwonde National Park, at the southern point of Lake Malawi, this morning, to lay a wreath for Matthew Talbot, a British soldier who lost his life working on an anti-poaching project with African Parks and the Malawian government. Part of a 30-person battalion who were training park rangers in an effort to crack down on the illegal trade in wildlife, the 22-year-old was killed by an elephant on May 5.

The Duke also announced two new Queen’s Commonwealth Canopy initiatives. Launched in 2015, is a joint initiative by all 53 Commonwealth countries who are dedicated to protecting the world’s indigenous forests in the Queen’s name. In Canada, it has endorsed the protection of B.C’s Great Bear Rainforest, which prompted the provincial government to establish a $1-million education and awareness trust.

“The Duke’s passion for trees and forests as nature’s simple solution to the environmental issues we face has been inspired by the years of work he has been doing on behalf of his grandmother, Her Majesty Queen Elizabeth II, and The Queen’s Commonwealth Canopy,” reads the @sussexroyal posting, followed by tree emojis.

As for his role in the @NatGeo takeover, Harry said “#LookingUp seeks to raise awareness of the vital role trees play in the Earth’s ecosystem, and it is an opportunity for all of us to take a moment, to appreciate the beauty of our surroundings.” After all, it isn’t every day a Prince asks to see your photos.

Meanhwile, back  in Johannesburg, Meghan, Duchess of Sussex visited Victoria Yards, an urban regeneration project that is an inner-city arts and cultural haven. Built on the site of what was a laundry factory in the 1900s, in the past few years it has been transformed into a community space of studios, workshops and galleries for artists, sculptors, artisans, metal and wood workers.

There, according to the @sussexroyal Instagram account, Meghan connected with children who are part of a development program called Timbuktu in the Valley, where she was pictured hugging and chatting with the young people. She also toured the artisanal offerings, drawing special attention to a custom denim designer, Tsepo Mohlala, who had three crowns on his label in a tribute to the “three ladies who raised me.”

She met the owners of Sobae Frozen, who make frozen yogurt from unused fruit from food vendors in the Yards, and listened, visibly moved, to spoken word poetry by Belita Andre, the winner of the Poetry Grandslam.

The @sussexroyal posting went on to also celebrate the DICE social programs run out of the space under the Developing Inclusive and Creative Economies British Council banner, in partnership with emerging economies, including South Africa. The Duchess learned about several programs focused on marginalized women and children, and how creative and social enterprise can make the local economy more inclusive.