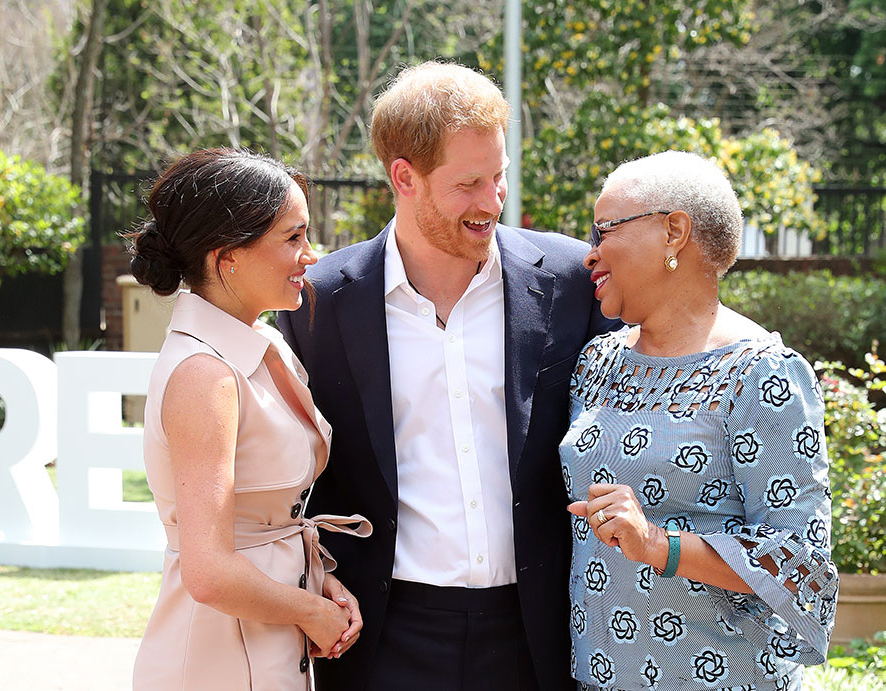 The Duke and Duchess of Sussex were all sunshine and smiles on the final day of their South African tour at a job-creation project in Tembisa township near Johannesburg this morning. This follows the abrupt announcement last night of a lawsuit by Meghan, Duchess of Sussex, against The Mail on Sunday over a private letter sent to her father that was published in February 2019.

In the afternoon, Meghan met Nelson Mandela’s widow, Graca Machel, for the first time, grasping her hand warmly as they walked inside the British High Commissioner’s residence with Harry, who met Machel in 2015. The duchess dug into her closet for the meeting, wearing the same pink coat dress by Calgary-based  House of Nonie that she wore in London to the Nelson Mandela Centenary Exhibition in July 2018.

Their conversation was off the record for the most part, although reporters listened in as Harry and Meghan looked back on their 10-day visit.

“We’ve met the most incredible people,” Meghan said, describing South Africa as the most “energizing” place. “Even though it’s a full schedule,” she said of their tour, “you just feel uplifted.

Machel, addressing Harry’s continuation of the work clearing landmines started by his mother, Diana, before her death in 1997, said, “it was really very moving.”

The Sussexes then moved into the garden for a reception, where both gave a few remarks, with Harry saying this latest visit “has filled us with hope and optimism.”

Referring to the important economic ties between South Africa and the U.K., he said, “When Africa prospers, the world prospers. This is truly a continent of opportunity.”

Prince Harry concluded by saying, “Africa will always have a special place for me and my family, and I can’t wait to return.”

Reunited after six days apart, after Harry went off solo for events in Botswana, Angola and Malawi, the Duke and Duchess held each other’s hands for much of this morning as they arrived in Tembisa. They came to see the work of the Youth Employment Services (YES) project, launched by President Cyril Ramaphosa last year with the heady goal of creating one million new jobs. The unemployment crisis in the townships is dire, especially for youth, with six in 10 people unemployed.

These are the kinds of projects the Sussexes have brought to international attention on this trip to Africa. Thus, in coming yesterday, the penultimate day of the triumphant 10 day tour, the timing of the lawsuit is distinctly odd. The couple has received rave reviews for their humble manner and sincere devotion to the range of causes they have espoused.

The take-no-prisoners statement from Prince Harry that accompanied the lawsuit news warned against the “ruthless campaign” of the British tabloid press against his wife. In the emotional and raw statement, Harry also invoked the death of his mother, Princess Diana, warning about “history repeating itself” as the bullying of Meghan was taking its toll.

Harry addressed the disconnect this way in his statement: “The positive coverage of the past week from these same publications exposes the double standards of this specific press pack that has vilified her almost daily for the past nine months; they have been able to create lie after lie at her expense simply because she has not been visible while on maternity leave. She is the same woman she was a year ago on our wedding day, just as she is the same woman you’ve seen on this Africa tour.”

Continuing on at YES, the Sussexes also toured the hub’s programs including the digital facility where it provides community members with computer and financial literacy skills. The royal couple certainly looked crisp and fresh this morning, Harry in a natty pale-blue sports jacket, Meghan in one of her signature shirt dresses, this one a flowing, white, Tencel shirt dress from Cape Town designer Hannah Lavery. The South African designer made the limited edition dress from leftover fabric in an effort to minimize waste.

In her final speech, Meghan spoke directly to young people, assuring them that even if they were in despair and felt powerless or like they didn’t belong, they have the power to change the world.

“I have learned from the people I’ve met here, that whether it’s about society’s expectations of masculinity or femininity, or how we divide ourselves by race or faith or class or status — everyone has value, and everyone deserves to be heard and respected. And if you live your life in that way, your generation will start to value each other in ways the rest of us have not yet been able to do so.”

Harry wore his heart on his sleeve in his speech following the morning’s tour: “It’s moments like today and meeting all of you that inspires us,” he said, going on to talk about his love for Africa.

He seemed to obliquely address the press battle when he added: “We will firmly stand up for what we believe. We are fortunate enough to have a position that gives us amazing opportunities, and we want to do all we can to play our part in building a better world.”

Harry made another reference to his deep connection to Africa, where his father brought him and his brother, William, to grieve in private following the sudden death of their mother in 1997. But Harry was careful to acknowledge the difficulties many on the continent face, struggles that can’t be seen in the posed photo ops of a Royal Tour.

“I know that there are daily struggles that most of us couldn’t begin to imagine. Yet I have seen strength, resilience, a sense of hope and empathy that I can only aspire to replicate. Ever since I came to this continent as a young boy, trying to cope with something I can never possibly describe, Africa has held me in an embrace that I will never forget, and I feel incredibly fortunate for that.”

Bringing it back to his own family, he added with warmth: “And as I raise my own son, I want to make sure that what I’ve learned here – the value of the natural world, the value of community and friendship – is something that I can pass on to him.”

Yesterday, Meghan told reporters she was grateful she had been able to keep little Archie, almost five months, on his normal schedule. Asked about how working with a baby was going, she said: “Oh my goodness, well, we’re doing well. I think the schedule — they have been very kind to me, because everything is based around Archie’s feed times. So it’s a full plate, but we’re making it work. It’s worth it.”