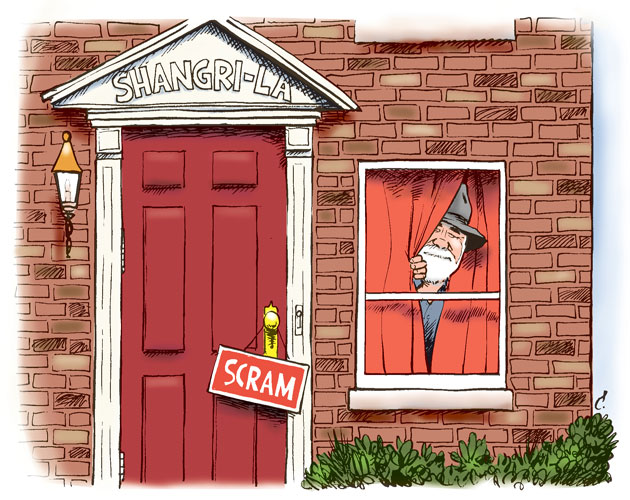 Arthur Black discovers that he is his own best company.

I live, as I’m certain you do, in Shangri-La, Canada. Your corner of bliss doesn’t call itself Shangri-La, nor does mine, but that doesn’t make them any less splendid. Our nation has dozens of such places. Aren’t we lucky? Don’t worry, I’m not going to “out” your community. Or mine.

Because that’s the problem with living in Shangri-La — it loses its lustre when it becomes a tourist destination. Word gets out and people — sometimes folks you barely know — want to visit. And, even worse, stay over. One’s friends are not always, as my editor delicately puts it “pyjama-worthy.” As Ben Franklin put it less delicately: “Fish and guests stink in three days.”

I assumed the remoteness of my location and the presence of two large dogs would discourage unsought visitors. I hadn’t allowed for GPS and the fact that said dogs (have you met them — Judas and Quisling?) are gaseous doormats, happy to switch allegiance for a scratch behind the ears.

The Dengue Fever Quarantine signs worked for a while, but nobody really believed my Danger: Land Mines postings. And Canada Post threatened a boycott if I left the rolls of razor wire across the front walk.

In the end, we found a much simpler solution, my Sweetie and I: we abandon ship. We cancel the paper, send the dogs to the poochsitters and head for a tiny, secluded lodge we know. It’s not far — less than an hour by back roads and ferryboat — but it’s pure time travel. Backwards.

Peter Mansbridge and Lloyd Robertson — their electronic manifestations at least — are banned from this lodge. No television or radio — period. There is, of course, no Internet access nor even telephones in the cabins, and there is a specific and firmly enforced ban on the use of a cellphone where anyone else might overhear it.

There are walking trails, a tennis court, a chilly salt-water pool and bicycles or kayaks for the energetically inclined. For the rest of us, there is a huge common room with a Brobdingnagian fireplace surrounded by a flotilla of fat, overstuffed couches and cozy armchairs encompassed by picture windows overlooking a vista that can make you catch your breath and rearrange your life priorities. Through the glass, you can watch the antics of eagles, otters, freeloading deer and an almost alarming number of tame rabbits. Inside, you’ll find card tables, backgammon boards, jigsaw puzzles and more books and magazines than you could read in a lifetime.

And then there’s the food: home-cooked, hearty and ridiculously delicious. You will gain weight. It’s the law.

It’s the kind of place where the owner knows your name, the waiters remember how you like your eggs and the whole dining room sings “Happy Birthday” at you when your day rolls around. There is a motto: eat, sleep and read. It’s not strictly enforced (nothing, aside from the cellphone embargo, is), but guests invariably enter the Lodge Triathalon.

You will nap — that’s also the law.

We don’t stay long, my Sweetie and I, but we do go often, if only for a couple of days at a time. When new guests find out where we’re from they do a double take. “You live 40 kilometres away and you come here for a holiday? How come?”

We just smile and spread our hands to take in all the things we have there — meals (cooked by someone else); rooms (cleaned by someone else); the chance to connect with old friends and make new ones. We also point to the things the place lacks: jangling telephones, manic radio commercials, the nightly litany of TV news disasters.

Oh yeah — and there’s no chance of opening the front door to find your wife’s sister’s second cousin’s nephew with three kids and six suitcases wondering if it’s okay to park his Chevy Blazer on the boulevard. “We were in the neighbourhood and figured, ‘What the heck?’ ”

That never happens at the Lodge. Speaking of which, I’ve told you all about the place but never mentioned the name. It’s …