I did it for the birthday card 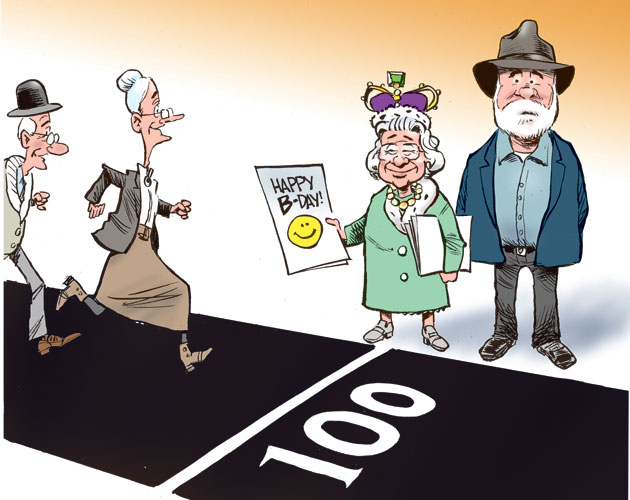 Received your birthday card from the Queen, yet? If so, you’re in pretty select company. The painter Doris McCarthy got hers before she passed on last year. So did actress Barbara Kent, weatherman Ed Russenholt, politician Keir Clark, pianist Frances Adaskin, physician Gordon Fahrni and gospel singer George Beverly Shea.

Aside from being notables in their respective fields and Canadians, those folks had one other thing in common.They all made it past the 100-year mark, which earned them personal birthday cards from the Queen.Imagine. These were people born into a world of horse-drawn carriages, stovepipe hats for the gents and bustles for the ladies. Television was unimagined, and air travel didn’t exist. Neither did the Panama Canal or the theories of an obscure, wild-haired German by the name of Einstein.An exclusive bunch, the Century Club. Only one in 10,000 has the magic combination of genes, personality and sheer luck to make it through the turnstile. That whittles down to about 450,000 men and women worldwide, approximately 6,000 of them Canadians.

Special attributes? A sense of humour may help. Comedian Bob Hope was still cracking wise when he made his last curtain call in 2003 at the age of 100 years, two months. And George Burns? He was actually slated to perform at Caesar’s Palace on his 100th birthday (“How can I die? I’m booked!”)

He’d have made it too, if he hadn’t slipped in the bathtub and then caught the flu. He left the planet, a cigar undoubtedly smouldering in his ashtray, in his 101st year.

Jeanne Calment looked like she might enjoy a good cigar and a George Burns routine. A photo of her at age 20 reveals the wisp of a Mona Lisa smile crossing her pretty lips. Mademoiselle Calment was born in Arles, France, in 1875, about the time a fellow named Bell was in Brantford, Ont., fooling around with a gizmo he called a telephone. Like the finest of French wines, l’Arlesienne proceeded to age beautifully. In her 85th year, she took up fencing. She was still riding bicycles at the age of 100.

She outlived her husband, her daughter and even her grandson, Was it because of her diet? She gobbled a kilo of chocolate a week, doused all of her food in olive oil and was fond of a glass or two of port. She also smoked comme une cheminée.

Mind you, she finally saw the folly of smoking and gave it up for good – at the age of 117. Jeanne Calment finally left us in 1997 at the age of 122 years, 164 days. She passed directly into the history books for having had the longest confirmed human life span in history.

Perhaps a sense of humour does help. There’s another photo of Mme. Calment sitting in front of a birthday cake with the number 122 on it and that Mona Lisa flicker is still playing on her lips.Keep smiling, folks – it sure can’t hurt. Someone once asked Woody Allen what he hoped they’d be saying about him 100 years from now. He said he hoped they’d be saying, “Damn, Woody looks good for his age.”