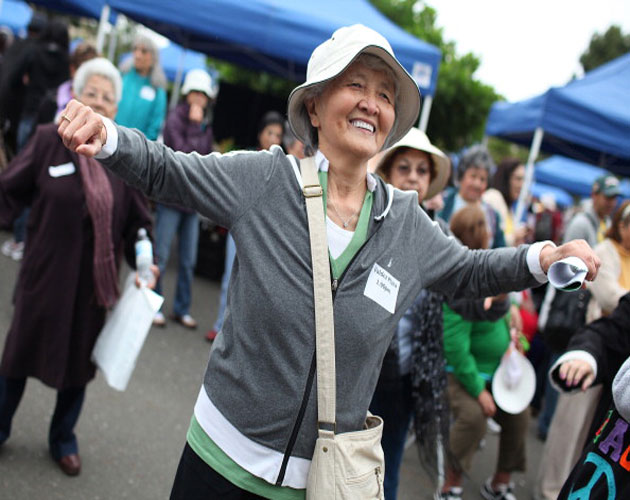 Lose weight, help your heart and have fun? You should be dancing.

Genny Sacco-Bak has been exercising all her life – weight training, boxing, practising yoga, dancing and even running half-marathons – but she has recently been completely won over by a new Latin-based dance workout called Zumba.

By day, the 51-year-old wife and mother of two is a full-time regional events and development co-ordinator for The Arthritis Society for Manitoba-Nunavut, organizing Joints in Motion events and helping people achieve their goals. Five times a week, however, she transforms into a passionate Zumba instructor.

Zumba is a low-to medium-impact dance workout combining fast and slow dance rhythms to tone and sculpt the body. Zumba uses the principles of interval training – alternating fast and slow sequences – to vary the intensity. Intensity is driven by the different rhythms of the music and the steps – meringue, salsa, reggaeton, cumbia, calypso, even a little hip-hop.

Learning the new Zumba dance steps is stimulating to the mind, and one 21-year study published in the New England Journal of Medicine found that dancing as a physical activity may be associated with a lower risk of dementia, although more trials are needed to determine if there is indeed a causal connection.

With Zumba Gold, which specifically targets boomers, the moves are kept fairly simple and the steps repetitive, so men and women of all ages and fitness levels can participate. But don’t mistake simple for easy. You get a heart-pumping workout that can burn up to 700 calories an hour, depending on the level of intensity.

Sacco-Bak was hooked from her first Zumba class for several reasons. The Zumba motto is Ditch the Workout, Join the Party. She found the feel-good atmosphere, motivating Latin and international music mix and energetic moves a fun way to socialize and relieve stress.

“For an hour, I could be free, expressive and creative,” says Sacco-Bak. She also lost the extra weight that tends to creep up in mid-life – 30 pounds in her case. “I was feeling stronger, healthier and just better about myself.”

Encouraged by the results, she became a certified Zumba Basic instructor in February 2010 after attending a training course offered through www.zumba.com. Now, she is an instructor with Bella Ghita Fitness (www.bellaghita.com), teaching five classes a week at select gyms and community centres in Winnipeg.

And it’s not just for the ladies. Burlington, Ont.-based Mark Lerner, 57, has been a Zumba instructor for three and a half years. “There are a number of men who teach Zumba,” says Lerner. “I’m aware of at least nine male instructors in my area alone.”

Lerner currently teaches seven Zumba classes a week at fitness studios, private members’ clubs and corporate functions in the Mississauga, Burlington and Ancaster, Ont., areas. He says it’s his favourite workout because of “the endorphin rush as you’re sweating and moving to the hypnotic music. When you get going and start swivelling your hips, it’s fun to dance. I love teaching Zumba because everyone’s moving, laughing and smiling at you.”

“Being a Zumba instructor has absolutely changed my life,” says Sacco-Bak. “I feel in better shape with improved energy and more stamina than when I was 25 years old. When people discover that I’m 51 and they see my energy output, they feel inspired,” she explains.

Sacco-Bak says her passion is no passing fad and to prove it, she got a Zumba tattoo. It was a birthday gift from her children.