Gay is Okay and Atheists Go to Heaven: Is Francis the Rock Star Pope? 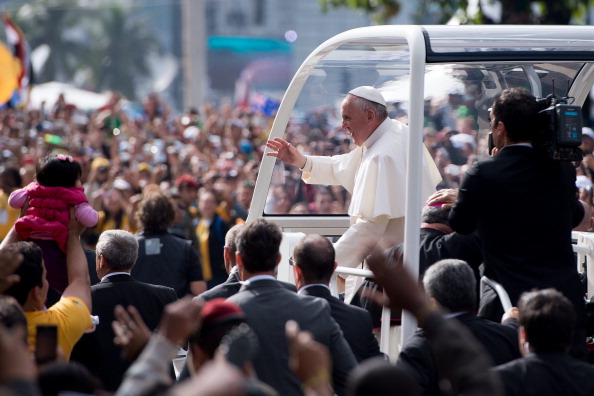 Technically Sunday was World Youth Day, but you may as well have dubbed it Pope-a-palooza 2013. More than a million people gathered on Brazil’s Copacabana beach, nuns and bikini-suit clad revellers frolicking side by side in the water and singing the praises – literally – of the pontiff at the centre of it all. It seems Pope Francis may be re-writing the papacy, just as Barry Manilow may have to re-write the lyrics to his signature tune:

At the Copa, Copacabana, the hottest spot south of the Vatican

Prayers and passion were always the fashion

At the Copa, they fell in love….

Pope Francis’ weeklong Brazilian pilgrimage, culminating with World Youth Day, saw three million faithful turn out across various cities and locales. They threw gifts, flowers and, yes, even small children into the pope’s lap. The 76-year-old pontiff drove around in a Fiat with the windows down, sipped tea offered by fans, tried on a Brazilian tribal headdress, visited with the poor and implored regular folk to shake up the Church.

“What is it that I expect as a consequence of World Youth Day? I want a mess … I want trouble in the dioceses! […] I want to see the church get closer to the people. I want to get rid of clericalism, the mundane, this closing ourselves off within ourselves, in our parishes, schools or structures. Because these need to get out!”

Then the “Rock Star Pope” trashed his hotel room, tossing a television out the window while blasting “Stairway to Heaven” on his stereo.

Just kidding. He did, however, do one better with the stunning declaration that, “If a person is gay and seeks God and has good will, who am I to judge him?”

When the widely adored Pope John Paul II passed away, he left a big white hat to fill. Benedict XVI, proved a little quieter than his predecessor, more subdued, very traditional, and against the idea, for example, of gay men becoming priests.

When Benedict stepped aside earlier this year, the opportunity arose for a papal youth injection. And what happened? The College of Cardinals elected a nearly 80-year-old man with one lung and little desire to be pope.

Yet he took the name of St. Francis of Assisi and promised to serve the poor, and any question of the pope’s vitality or willingness to perform his papal duties was quashed with the Brazil trip. The pilgrimage marked Francis’ first international journey as head of the Catholic Church – an appropriate destination considering the Argentinian is also the first pontiff to hail from the Americas – and could telegraph the frenzy folks are in for when the pope travels to other parts of the world.

By showing a willingness to think more outside the box than most pontiffs, Francis earned the “Rock Star” mantle largely for beginning the process of re-invigorating a troubled Catholic Church that at times appears painfully out of touch with the 21st century world. Indeed if he has to be pope, he’s going to do it his way.

Sure, in the big picture Francis’ declarations amount to baby steps, given the answer is still “no” to female priests (despite Francis’ call for greater involvement of women in the church), gay marriage, abortion, and other hot-button issues, as well as sex abuse cases that date back to John Paul’s pontificate that need to be addressed and resolved (on that note, he acknowledged, almost apologetically, those who “have lost their faith in the church, or even in God, because of the lack of consistency of Christians and ministers of the gospel.”).

Baby steps, yes, but they’re headed in the right direction, which is better than standing still or, worse, a tumble backward into the Dark Ages.

Meanwhile, some Catholics aren’t thrilled with Francis’ “Rock Star” image, fearing “the danger of a repeat of Pope John Paul II looms here: a return of the papal cult of personality … Under JPII we saw its deleterious effects, most especially in the diminishment of shared authority among bishops, the centralization of the liturgy, and creeping infallibility that made it almost impossible to have honest conversations about vexing issues in the church.”

When the subject of the youth protesting his visit came up, Francis explained: “The young person is essentially a non-conformist, and this is very beautiful … It is necessary to listen to young people, give them places to express themselves and to be careful that they aren’t manipulated.”

Then there’s Bill Maher, famously atheist and now a staunch believer that Francis is, in fact, one too: “He said this week…the Lord has redeemed all of us, not just Catholics, even the atheists … And then of course — it’s funny because just like politics, the hierarchy at the Vatican was like, ‘What the f-ck did this guy —?’ You could almost see them preparing the poison. Luckily we’ve got a spare pope.”

Regardless of your take on Francis – “Rock Star Pope,” the “People’s Pope,” the “Pope for the Poor,” or simply a man in a robe – he’s incredibly popular, and seems to genuinely want to deliver the church from the extravagance of its golden gildings and back to grassroots worship among the people. So far the people seem to be behind him. Only time will tell if the message of Francis’ pontificate will ultimately prove successful at the altar, or end up sacrificed on it.