“The World Remembers” Honours Fallen Soldiers with Their Mother’s Words 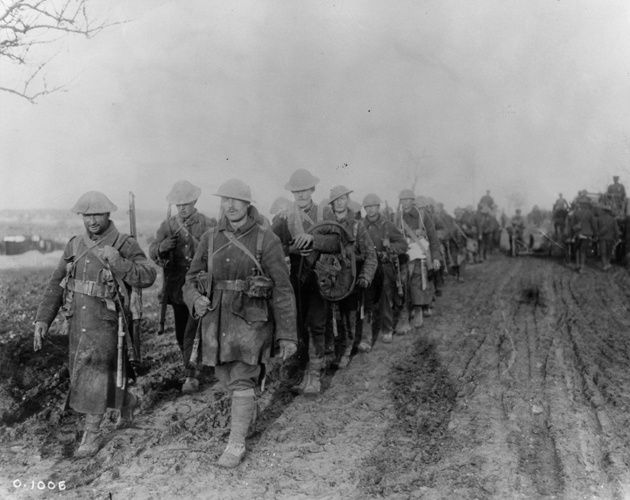 For the second year in a row, celebrated Canadian actor and director R.H. Thomson, 67, is spearheading an initiative to ensure that soldiers who died on all sides of the battlefield in the First World War are remembered. And he’s doing so with the help of words left behind from mothers from three different nations whose sons died in battle.

We interviewed Thomson last year about his non-profit, First World War initiative The World Remembers, which aims to honour the memory of the more than nine million people from around the world who perished in battle by ensuring their names are displayed in public spaces and online in participating cities and countries on an exact day, hour and minute so that their loved ones and fellow citizens can pay tribute.

The process takes place each of the war’s five centenary years, with the dead from 100 years earlier appearing in displays each year. In 1915, 5,472 Canadians died in battle, meaning this year those names appeared in participating schools, public venues – including Toronto City Hall’s rotunda – and online beginning on October 5th through to today.

This year, Thomson and The World Remembers took the real words of three mothers of fallen First World War soldiers – one French, one German and one Canadian – and commissioned The Song of the Mothers with the National Art Centre Orchestra to help commemorate the 2015 campaign, which was then “provided at no charge to schools, libraries, universities, community centres and other organizations participating in The World Remembers project.”

Thomson spoke with Zoomer to discuss the details of The Song of the Mothers and The World Remembers initiative.

MIKE CRISOLAGO: Tell me a little bit about how The Song of the Mothers came about.

R.H. THOMSON: Each year we commission a choral piece because we come from the arts and we say the arts, and especially music, is one way you can actually try to express what happened to the people in World War I. So last year was The Song of the Poets. We put together a text from a German poet, a French poet, a British poet, a Canadian poet. And this year is The Song of the Mothers, and it’s a text from three women – a French woman, a German woman and a Canadian woman – each who lost sons in World War I, and the text is put together as if these three women are speaking together. And it’s taken from their diaries, their letters, their journals, but they write to their family about war, about their son, about what they feel.

MC: So these are literally their actual words and feelings derived from real diaries and journals?

RHT: They’re real diaries and journals, they’re real ladies. The Canadian woman is Mary Elizabeth Stratford, who happens to be my great-grandmother, who lost four sons in World War I. The German woman is Käthe Kollwitz, who was a stunning German artist – and her son was killed in 1914 – and she spent her life making these sculptures and drawings, mainly based on mother and child and her writings are really strong. And she did two iconic sculptures called The Grieving Parents in the German war cemeteries. And the Frenchwoman is Madame Mialaret who, in a way, adopted a Canadian soldier as a sort of second son before he was killed.

MC: You kicked off this initiative last year. How was the first year for you?

RHT: Talk about roller-coasters, this is the rollercoaster that turned you upside down, threw you around, you had to be strapped in your seat, but we came out the other end. The challenges – you have to have a relationship with each country that’s in the project, and we had nine nations in the project and that would take an office of 24 to keep up those relationships. And we have an office of three. So it’s very challenging to keep all these balls in the air.

And then you have to raise the money, and that’s a hard hill. And then the data. People think, “Well, you get the names, you get the names online.” Well, no, the data is in fact really hard to get and you have to have a relationship with each nation for them and I have an agreement with each nation to release data to the project. And then we have to work on it because the general rule is if you won you kept good records and if you lost you didn’t. So I mean, the records for Italy, for Austria, for Slovenia – we won’t talk about Russia – are in very strange shape, even the French records of 1.6 million names, we spent several thousand dollars trying to consolidate those records.

And then because the names are timed to the minute, so you could find the website the moment that any name will appear, and because each country’s names appear at a regular interval … the math to make all that work in all these displays is pretty complex. So it sounds simple to show the names, but actually it’s quite a large project. It’s centered in Canada but it’s international in outlook.

MC: What sort of feedback did you get from families of loved ones whose names appeared on display?

RHT: We got some extraordinary emails. Because people, when they look up their family name in the search function, some people are finding family history that they’ve never seen before, and some people have felt that we’ve given them part of their family. They remember there were stories about great-great-uncle Jeb, but it doesn’t go beyond that, and then when they go to the website and look up a name and then discover this man who in fact was their great-great-uncle, and it says where he’s buried and it gives his details, they are given access to starting to look at their history.

For more information on The World Remembers, to search their database of names or to donate to the organization, visit www.theworldremembers.org.