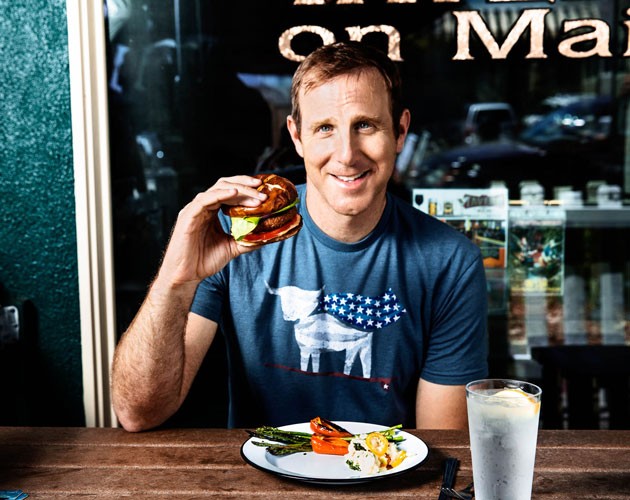 Ethan Brown, founder of Beyond Meat, has created a plant-based burger made with the same protein and flavour profile as the beef burgers we love.

It’s official: our love for meat has become a problem.

Factory farming—the method of meat production that much of the industrialized world relies on—is brutally cruel and produces a product that’s pumped with harmful antibiotics and hormones. Globally, over 50 per cent of crops are used to feed livestock while over 1 billion people are undernourished. Add to that a growing population with no plans of reducing its meat consumption and you have what many are calling a global crisis.

Edgar G. Hertwich, the lead author on a UN environmental impacts report, suggests that government policy address the issue. “A shift of thinking is required, but a whole raft of social and cultural factors need to be taken into account — you can’t have uniform recommendations here,” he says.

Ethan Brown, Founder of Beyond Meat, disagrees—at least in part. For him a shift in how we think about meat and the uniform solution is one in the same. That shift involves building meat from plant protein.

His approach, he explains, came from an understanding of how important meat consumption has become to consumers. “You can’t ask a consumer to change this. It’s too fundamental. It’s like asking people to stop having sex and have artificial insemination,” he says. “We will continue to eat meat and it’s a question of where the meat’s going to come from.”

This is where his company’s star product comes in, the Beyond Burger. Unlike most veggie patties that are packed with soy, the beyond burger is made from the same building blocks as meat—only it uses pea protein. “The flavours in meat are the result of a reaction of about 600 different molecules,” Brown told Bustle. “We’ve studied those molecules to identify similar molecules in the plant kingdom and combine them in the same way so they give you that aroma and flavour.”

The final product is a plant-based patty that mimics the flavour and protein profile of beef while excluding the unwanted cholesterol and carcinogens. It even bleeds beat juice when you throw it on the grill.

Brown and his company aren’t stopping at beef either. They’ve also added plant-based chicken to their arsenal and have plans to create plant-based pork products like bacon.

Currently, his products are available at Whole Foods and Safeway in the United States but have yet to make an appearance in Canada. His goal, he says, is to change the source of meat but not the experience. By doing so, Brown believes he can give consumers the opportunity to produce change without a major shift in lifestyle.

“If you present people with something that is same, but has health benefits, they’ll go for it, whether they’re 90 or 15,” Brown says. “There’s an innate desire for this to work. We want to keep eating what built us but we realize we’ve tapped out and we’ve got too much at stake.”

Ethan Brown recently delivered a talk at ideacity 2017 in Toronto to update us on Beyond Meat’s progress.