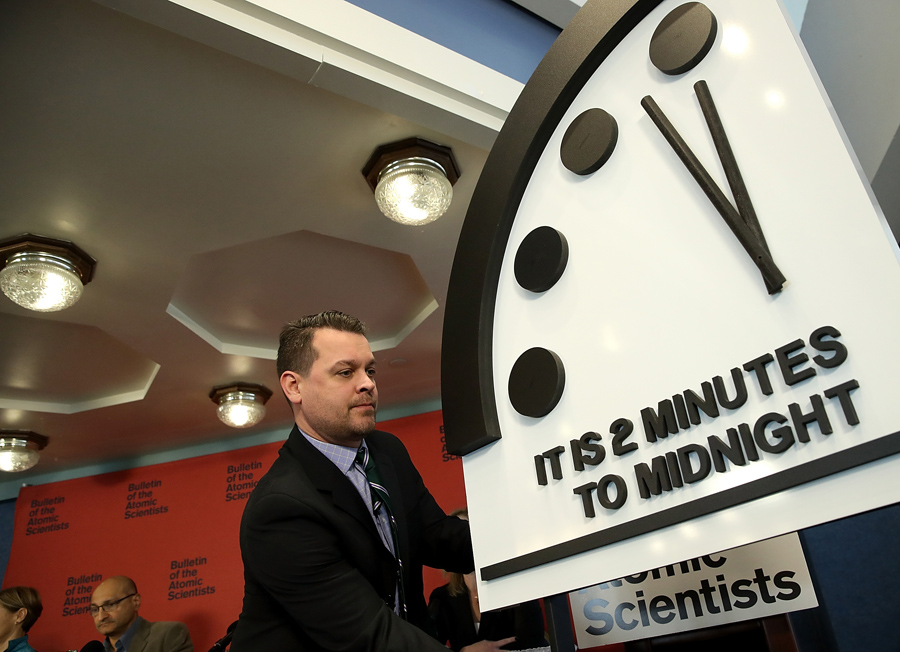 The Doomsday Clock, which measures how close humanity is to extinction, is now set at only two minutes to midnight. And unlike the New Year’s countdown to midnight, this is one metaphorical ball that you do NOT want to drop.

If you’re one of those people who can’t even stand changing the clocks by one hour during daylight savings time, you’re not going to like this: the Doomsday Clock, which is like a theoretical oven timer that dings when the world is just about cooked, is dangerously close to going off.

Devised in 1947 and overseen by the Bulletin of the Atomic Scientists, the Doomsday Clock  is defined as “a symbol which represents the likelihood of a man-made global catastrophe.” In fact, it hasn’t been this close to midnight – at which point we’re effectively blown to smithereens – since 1953, when the U.S. and Soviet Union traded thermonuclear weapons tests during the Cold War.

According to the official Doomsday Clock 2018 statement:

“To call the world nuclear situation dire is to understate the danger—and its immediacy.”

Okay, so it’s bad. In hindsight, when considering the childish name-calling bandied back and forth between U.S. President Donald Trump and North Korean dictator Kim Jong-Un, it’s safe to say that perhaps humanity doesn’t have its best people on the front lines of this nuclear-charged situation. The statement also warns about nuclear arsenals, and tensions, growing through Asia, India and Pakistan and the Middle East. And as depressing as that is, that isn’t the only dire threat. They also say that nations aren’t doing enough to decrease global carbon dioxide emissions, which means climate change is still a major risk factor. Oh, and also this:

“Beyond the nuclear and climate domains, technological change is disrupting democracies around the world as states seek and exploit opportunities to use information technologies as weapons, among them internet-based deception campaigns aimed at undermining elections and popular confidence in institutions essential to free thought and global security.”

Alright, this is getting scary. So, if the nukes don’t eradicate us and irreversible climate change doesn’t choke us off then weaponized technology, data and deception campaigns will bring about the slow, excruciating fall of humanity. Lovely. Well, at least that’s all the bad things accounted for.

What do you mean “but”? There’s more?

“But there has also been a breakdown in the international order that has been dangerously exacerbated by recent US actions. In 2017, the United States backed away from its long-standing leadership role in the world, reducing its commitment to seek common ground and undermining the overall effort toward solving pressing global governance challenges. Neither allies nor adversaries have been able to reliably predict US actions—or understand when US pronouncements are real, and when they are mere rhetoric. International diplomacy has been reduced to name-calling, giving it a surreal sense of unreality that makes the world security situation ever more threatening.”

Oh come on! So, when Donald Trump and pals promised to make America great again and turn back the clock to the 1950s, this is what they meant? The year 1953, the last time the world came this close to imploding?

Okay, this notion of the fall of humanity and lawlessness and vast wastelands is all starting to sound very “Mad Max.” Is there anything – anything at all – that we can do to bump this Doomsday Clock back a few hours?

“Leaders react when citizens insist they do so, and citizens around the world can use the power of the internet to improve the long-term prospects of their children and grandchildren. They can insist on facts, and discount nonsense. They can demand action to reduce the existential threat of nuclear war and unchecked climate change. They can seize the opportunity to make a safer and saner world.

There you go, folks. Get online and start protesting world leaders to get their act together. Make your voices heard!

Or, at the very least, when you go online cue up some of your favourite puppy and kitten videos because, if things don’t change, we may not be around much longer to watch them.