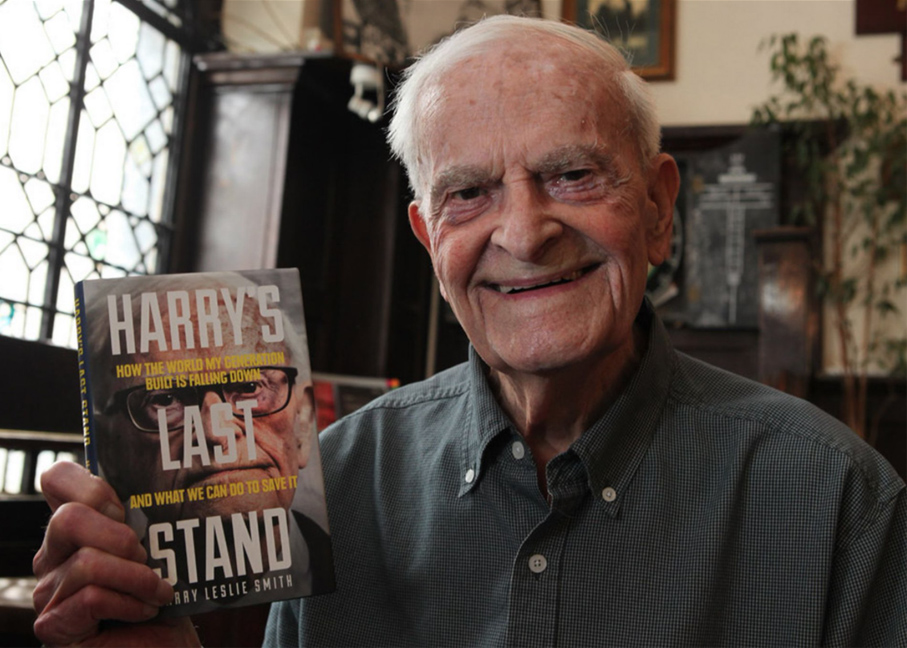 Harry Leslie Smith, the British-born Second World War veteran who launched a late-in-life career as a political commentator, author and podcast star and, most recently, captured the world’s attention on Twitter after suffering complications from a fall, has died. He was 95.

Smith, who’d moved his family to Canada following the Second World War and kept a home in Ontario for the rest of his life, died in the Belleville, Ont., hospital where he’d been receiving treatment since his fall on Nov. 20.  His son, John, tweeted the news via his father’s Twitter account, where he’d updated well-wishers on his father’s health struggles as he kept vigil over him for the last eight days.

“At 3:39 this morning, my dad Harry Leslie Smith died. I am an orphan,” he wrote earlier this morning, ending with the hashtag #IStandWithHarry, which had become the rally cry of supporters on the social networking site. About an hour later John added, “I am back home to our home and I alone. It is 4:36 in the morning and I am wrapped in the blanket that covered him as he lay dying. And, I know exactly what my steps are. I will follow in his footsteps. I will endeavour to finish his projects. I want to see his two self-published books 1923 and the Empress of Australia find a publisher so that more people will read about my dad’s early days.”

He also offered a glimpse into his father’s final hours, noting, “My dad had been so dreadfully thirsty because he’d had nil by mouth orders for almost a week. So when he decided that the potential for full recovery was not possible, he was allowed to drink a beer. Sadly though he couldn’t eat.”

Smith himself once wrote in the U.K.’s Guardian newspaper that, “For me, old age has been a renaissance despite the tragedies of losing my beloved wife and son. It’s why the greatest error anyone can make is to assume that, because an elderly person is in a wheelchair or speaks with quiet deliberation, they have nothing important to contribute to society. It is equally important not to say to yourself if you are in the bloom of youth: ‘I’d rather be dead than live like that.’ As long as there is sentience and an ability to love and show love, there is purpose to existence.”

Born in England in 1923, Harry Leslie Smith grew up in Depression-era England and served with the RAF during the Second World War before emigrating with his family to Ontario in the 1950s, where he made a career of selling Oriental rugs to prominent clients from business magnates to former Prime Ministers. In 1999, however, Smith’s wife Friede passed away from cancer and, a decade later, he lost his son Peter to idiopathic pulmonary fibrosis.

It was then, at age 86, that Smith chose to pen the first of three autobiographical, self-published books, Love among the ruins (2009), a memoir about meeting his wife Friede in the charred remains of Hamburg, Germany in 1945. Two more followed – 1923: A Memoir (2011), about his early life of poverty in England, and The Empress of Australia: A Post-War Memoir (2012), about the struggles of returning to England and resuming life after the war. A liberal-minded progressive thinker, he also began a second career as a respected political commentator by writing on politics and history for various British publications, as well as taking on speaking engagements and becoming a staunch anti-poverty advocate.

The BBC notes that, ” Mr. Smith divided his time between Yorkshire and Canada and spent time meeting with refugees from around the world and advocating on their behalf. He rose to prominence after giving an impassioned speech about his life and the NHS [a Department of Health body] at the Labour Party conference in 2014. After a speech which moved some delegates to tears, he was greeted with a standing ovation and widely praised on social media after warning the UK must ‘be vigilant’ about the NHS.”

Smith wrote two more books – Harry’s Last Stand (2015) and Don’t Let My Past Be Your Future: A Call to Arms (2018), both of which tackle ideas and solutions for improving the world for future generations while battling political tyranny and the degradation of public healthcare and other institutions. As well, he hosts a popular podcast that deals with similar issues, and boasts nearly 250,000 Twitter followers.

On Nov. 20, however, the 95-year-old, began garnering worldwide attention after a fall in his Belleville home.

“Bugger of a day, had a fall and now I am in hospital. It’s nothing just low blood pressure, but signing off for the next few hours,” he tweeted then. The situation, unfortunately, took a turn for the worse, and the ensuing 48 hours brought a barrage of health updates from Smith’s son John, who tweeted the experience of his lonely bedside vigil from his father’s Twitter account. In his tweets he discussed his father’s low blood pressure and pneumonia to the problems with Ontario’s healthcare system that left his dad stranded in the emergency room for hours while waiting for a bed to open up in the ICU. Updates included everything from recognition that his father’s medical situation could prove dire to Smith’s ongoing imploring of hospital staff to allow him a cup of tea (they finally did!).

Most incredibly, though, those 48 hours saw messages of love and hope flood in from around the world as everyone from fans of his work to politicians and world leaders rally around the 95-year-old using the hashtag #IStandWithHarry. That includes Canadian Prime Minister Justin Trudeau, who tweeted, “Harry’s journey and courage have inspired so much love and kindness on this site, and in the real world too. Thank you for taking us along – we’re pulling for you.”

At the time, Smith’s son John tweeted, “I told Harry before he fell into a deep sleep about the concern rippling across Twitter for him and he said to me, “tell them, I love each of them so much.”

Social media tributes continue to pour in from fans, friends and public officials following Smith’s passing, while his son John adds his own thoughts on Twitter about his dad’s passing. “I made sure that Harry, my dad, had a picture of Friede [his late wife] to hold onto while he rests in the hospital morgue,” he noted. He also tweeted, “Never forget that my dad, Harry Leslie Smith died in the warm and caring arms of public health care.”

John added that he hopes both Britain and Canada will hold public memories and wrote that, “I have spent the last 8 years with Harry on his beautiful odyssey to not make his past our future. It was honour to be his son and comrade.”

Meanwhile, the words Smith wrote for the Guardian in 2017 seem even more poignant than ever, proving why, in sickness as in health, people proudly stand with Harry.

“All of you, when young, will make your own history: you will struggle, you will betray some and others will betray you. You will love and you will lose love. You will feel profound joy and deep sorrow and during all of this you will grow as an individual,” he wrote. “That’s why it is your duty when you get old to tell the young about your odyssey across the vast ocean of your life.”