Russian Researchers Claim Jeanne Calment, the Oldest Person Ever, Is a Fraud 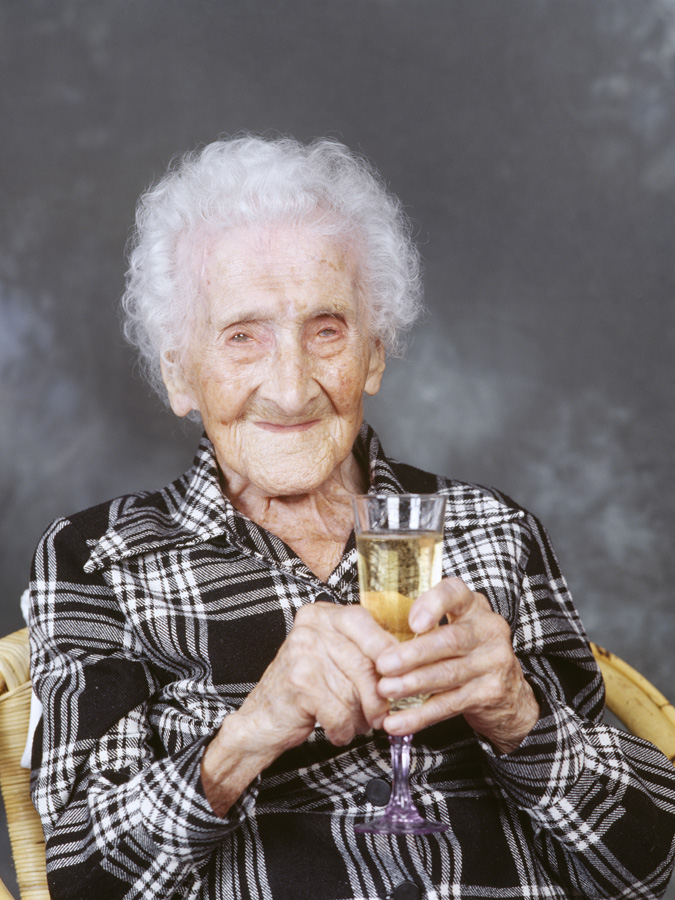 In a recently released research paper, a Russian mathematician and a gerontologist claim that the oldest recorded human in history, Jeanne Calment, may not have actually lived to the age of 122 but, rather, died in her 50s and had her identity taken over by her daughter.

According to The Daily Mail, Nikolai Zak (the mathematician) and Valeri Novosselov (the gerontologist) “studied biographies, interviews and contemporary photos” to come to their conclusion. The Ottawa Citizen adds that, “One of the paper’s key evidentiary points … is a Facebook poll of 224 people reporting that Calment did not ‘look’ like a supercentenarian … Zak provides evidence to show that Calment seemed to bear a closer resemblance to Yvonne than purported photos of herself as a young woman. It cites reports from witnesses, including a former mayor of [Calment’s French hometown] Arles, saying that she looked and acted younger than her supposed age.”

Yes, you read that right. She “looked and acted younger than her supposed age.” Evidently, since she wasn’t slouched in a rocking chair knitting a sweater and sipping prune juice – or whatever these witnesses think older people should be doing – she must be a fraud.

Officially, Jeanne Calment was born in February, 1875 in the Southern French town of Arles and died in August, 1997 at the record-setting age of 122. She and her wealthy husband had one daughter, Yvonne, who died of pneumonia in 1934 at only 36 years of age. So how, you ask, did Yvonne, supposedly pull off this great historical fraud when she died so young?

The Russian researchers claim that it was actually Jeanne who died in 1934, at the age of 59, and that Yvonne, in an effort to skirt paying inheritance tax, simply assumed her mother’s identity while essentially killing herself off. Yvonne, then, lived to be 99, but when adjusting for the 23 year age difference between the two women the fake Jeanne wound up at age 122.

a) Jeanne’s wealthy husband, Fernand Calment, who died in 1942, went along with this ruse to pretend his daughter was his wife for eight years just to avoid his daughter having to pay inheritance taxes.

b) No one in that small French village, in which the Calments were counted among the most prominent residents, noticed or discussed the fact that the 59-year-old Jeanne suddenly one day looked 36 (and exactly like her daughter). I mean, if nothing else they’d want to know her anti-aging secret.

c) Jeanne’s grandson, Frédéric, who was eight-years-old at the time of his mother’s death, happily went along with the scam and never once blurted out to anyone for the rest of his life that mommy is pretending to be grandma for some reason.

The Ottawa Citizen story cites Zak attempting to counter some of these discrepancies, noting that Calment spent much of the 1930s away from her hometown (which one might do if one was attempting to switch identities), that Yvonne’s husband lived with Jeanne for a long time after Yvonne’s death (because, you know, she was actually Yvonne), and that “Calment had most of her personal papers destroyed rather than turning them over to the local Arles archive” (indicating Yvonne wanted to hide evidence of her mother’s true identity).

Meanwhile, others, including some who lived in Arles when Calment was alive, dismiss the theory, as does the French gerontologist, Jean-Marie Robine, who personally worked with Jeanne Calment to confirm her age in her final years.

“Do you have any idea how many people would have needed to lie?” the Ottawa Citizen quotes him as telling the French publication Le Parisien. “One day Fernand Calment starts passing off his daughter as his wife and everyone keeps quiet about it? It’s preposterous.”

And according to The Guinness Book of World Records, Jeanne Calment remains listed as the oldest person ever.