No Sweat: This Breakthrough Solution for Hot Flashes May Offer Far-Reaching Health Benefits 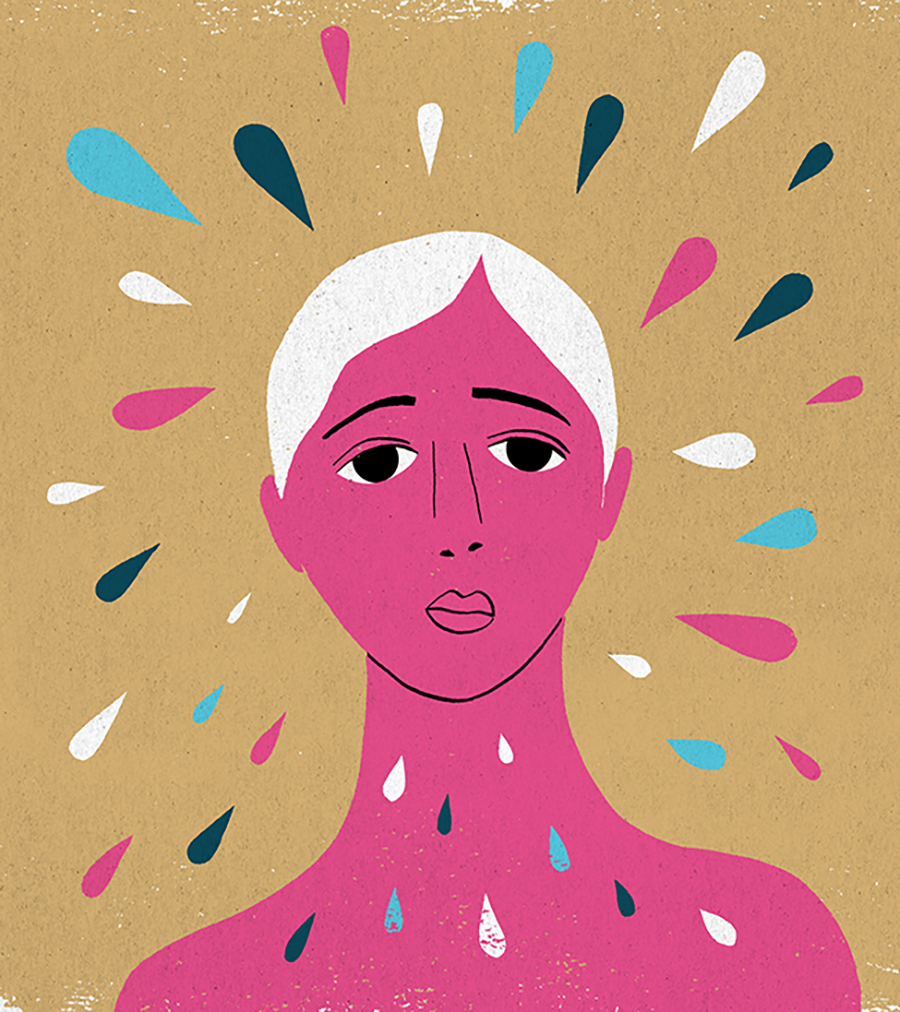 Hot flashes may be the butt of jokes to those who have never experienced them. But for someone who soaks through pyjamas and sheets once or twice a night, who hasn’t slept properly in months, who gets so many hot flashes during the day that social anxiety increases and isolation becomes preferable, hot flashes are no laughing matter.

While the majority of menopausal women will experience some degree of hot flashes for some period of time, they are not the only victims: women who have undergone surgical menopause or who are on estrogen-blocking drugs for cancer treatment and men undergoing certain treatment for prostate cancer may also suffer from hot flashes.

In fact, some cancer patients become so distressed and debilitated by hot flashes that they opt to quit treatment — a shocking reflection of just how awful they can be.

“We know that up to one-third of women stop chemotherapy because they just can’t stand the hot flashes anymore,” says anesthesiologist Dr. David Walega, chief of pain medicine at Northwestern University Feinberg School of Medicine. “They’re willing to put themselves at higher risk of cancer recurrence because they can’t live with that side-effect of treatment.”

But Walega and his team have found that an old pain treatment has dramatically reduced hot flashes in many who are suffering most severely. In a double-blind study of 40 women between the ages of 30 and 70 — all of whom experienced at least 25 hot flashes a week — Walega used a procedure to block the stellate ganglion, a collection of nerves found near the last vertebra in the neck. Among those who received the real injection, there was more than a 50 per cent reduction in their moderate to severe hot flashes even after six months.

Hot flashes don’t just cause heat-related discomfort; when one occurs, the sympathetic nervous system — of which the stellate ganglion is part — is stimulated, triggering the body’s fight-or-flight mechanism.

“People feel a sense of urgency or intense anxiety, flushing, heart racing, an increase in blood pressure and, in the most severe cases, they feel like they need to run and get the heck out of wherever they are,” says Walega, “even though it’s more of an existential threat or this internal physiologic threat.” That often debilitating panicky sensation can last for several minutes and may occur several times a day.

While the causes of hot flashes remain a bit of a mystery, researchers know that there are connections between the stellate ganglion and the areas of the brain that control the body’s thermostat.

“The mechanism by which the nerve block works is not completely understood, but one hypothesis is that this temporary nerve block may reboot your thermoregulatory centres by changing the amount of certain neuroendocrine substances like norepinephrine, serotonin and nerve growth factor,” he explains, though he concedes there is likely more to the explanation.

To nail it down, Walega is now in year two of a five-year $3.5-million study of 160 women. A subset of patients in the study have functional MRIs before and several months after treatment to identify areas of the brain that are implicated in hot flashes and what changes occur if the stellate ganglion block is performed, as compared to women who had a placebo injection. He is also studying the procedure in both breast and prostate cancer patients.

There is potential for the block to be helpful for those suffering with post-traumatic stress disorder, Walega says, but the published literature is contradictory. There are other ramifications for long-term health aside from severe episodes being uncomfortable and often debilitating. In fact, researchers have shown cardiovascular health is at risk in people who have severe uncontrolled hot flashes; sufferers typically also have poorer memory and concentration and do not perform as well on cognition and memory testing as women without hot flashes.

Although not definitive, research is still ongoing but the theory is that markers for cardiovascular disease may be affected by the vascular and neuroendocrine changes associated with hot flashes. Bringing them under control could have far-reaching benefits.

A version of this article appeared in the November/December 2019 issue with the headline, “No Sweat,” p.66-67.