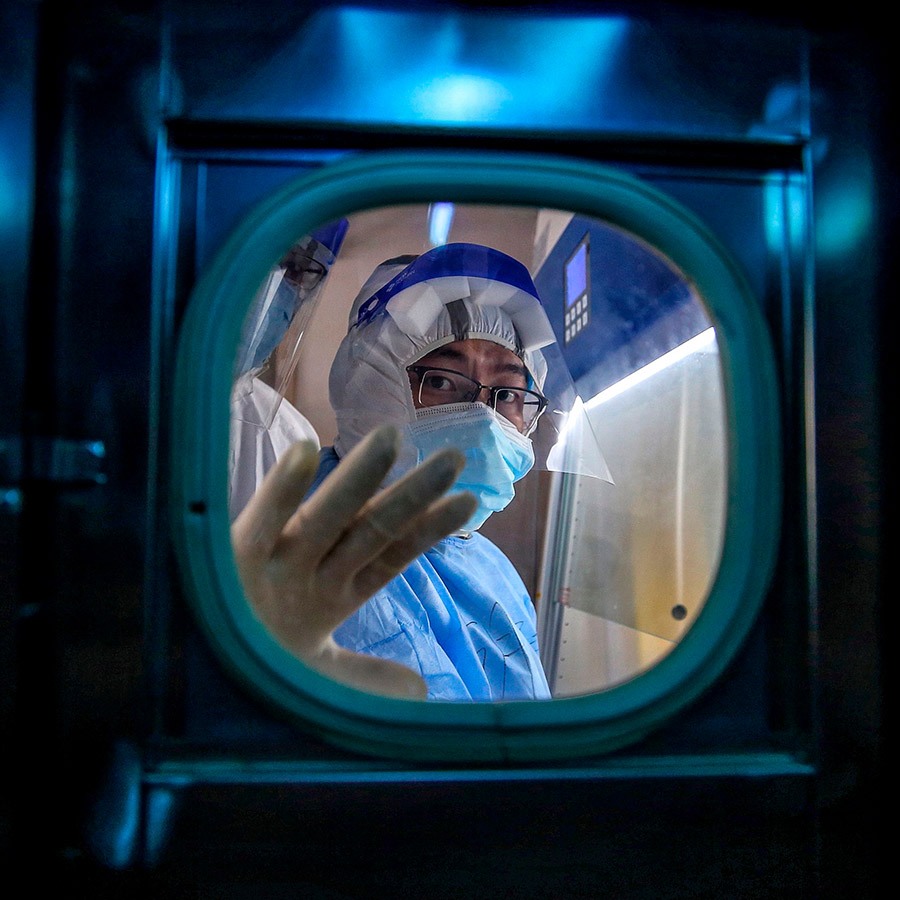 One of the first scenarios put forward — that the Wuhan seafood market allowed for a rapid dispersion of the COVID-19 virus — seems less certain now. Here, a medical staff member gestures inside an isolation ward at Red Cross Hospital in Wuhan in China's central Hubei province on March 10, 2020. Photo: STR/AFP via Getty Images

Since the beginning of the COVID-19 pandemic, there have been various hypotheses to explain the origin of SARS-CoV-2.

So far, none of these hypotheses have shown the origins of the virus. One of the first scenarios put forward — that the Wuhan seafood market allowed for a rapid dispersion of the virus — seems less certain now. After a year of intensive research, the virus has still not been identified in any animals.

Animal-human transmission, however, remains one of the strongest hypotheses explaining the appearance of the new coronavirus: the coronavirus was transmitted from bats to humans through an intermediate host. It would not be the first time this happened.

In the case of MERS-CoV (Middle East Respiratory Syndrome), camels likely served as the intermediate host. For SARS-CoV-2, pangolins, scaly anteaters sold illegally in the Wuhan market, may be the host, although this hypothesis requires more convincing evidence.

I am a professor in the department of biological sciences at Université du Québec in Montréal, an expert in virology, particularly in human retroviruses, and in human coronaviruses.

The idea that SARS-CoV-2 had accidentally leaked from a maximum-security biological laboratory — biosafety level-4 (BSL-4) — at the Wuhan Institute of Virology (WIV) began to circulate soon after the onset of the pandemic.

The possibility resurfaced in recent weeks, placing Dr. Anthony Fauci, director of the National Institute of Allergy and Infectious Diseases (NIAID), in an embarrassing situation. Some newspapers assert that the United States was funding this research laboratory and claim that the projects being funded there focused on gain-of-function studies. An opinion piece published in the Wall Street Journal claims that NIAID may have supported some of these experiments that were underway at WIV.

Although there may be benefits to gain-of-function experiments, there are also risks.

So, what are gain-of-function studies? Although the term is sometimes used broadly to refer to “gain-of-function” studies of proteins, in medical terms, it is associated with research on viruses. The goal of gain-of-function research is to create a virus with new properties that make it more pathogenic or more transmissible to humans.

Traditionally, this type of change focused on the growing the virus in animal or human cells. Recently, there have been important advances in animal models and in molecular biology techniques to make precise, targeted changes to viral genes. This process can lead to the rapid generation of new viruses (as opposed to the natural evolution of viruses, which takes several years) that are better adapted to humans, possibly changing their virulence and their ability to be transmitted between humans.

The rationale for this type of research is that by isolating these new viruses, researchers will be able to identify the specific changes in the genome that are responsible for the new characteristics. This knowledge could make it possible for scientists to better predict the arrival of new pandemics. It could help scientists develop vaccines and treatments adapted to new infectious agents.

Research That is Too Dangerous?

However, the principle underlying gain-of-function research has been widely challenged over the past decade.

A classic and oft-cited example, which concerns many scientists, is Ron Fouchier and Yoshihiro Kawaoka’s research on the highly dangerous avian H5N1 influenza virus. Using a technique that passed the virus from one ferret to another many times over, these researchers were able to create an H5N1 influenza virus that could be transmitted to the species by aerosols.

The study was widely debated and the research was eventually put on hold. The U.S. government even urged scientific journals not to publish its full results, arguing that the information could be used by bioterrorists. The research was resumed in 2013.

Gain-of-function research has the potential to help prevent animal-to-human transmission of a virus with pandemic potential. However, this type of research must be carried out in highly secure laboratory, such as those known as BSL-4.

These laboratories are built to protect staff and researchers from becoming infected, and to prevent organisms from escaping. However, documents from U.S. Embassy officials have revealed that the biosafety standards at the BSL-4 laboratory at the WIV were not sufficiently rigorous. In addition, a number of researchers have suggested that the institute’s gain-of-function studies on bat coronaviruses were risky and might be harmful to humans if it escaped.

So, the hypothesis that SARS-CoV-2 originated in a leak from the Wuhan lab is now being taken seriously.

Although a WHO-formed committee that visited the Wuhan facility concluded that no evidence appeared to support a human-made origin of the SARS-CoV-2 virus, several prominent scientists questioned whether China was being fully transparent during that visit. In an open letter published in May in Science, these scientists called for further investigation.

In a May 11 interview, Fauci called for a more thorough investigation into the origins of SARS-CoV-2. On May 26, U.S. President Joe Biden instructed his intelligence agencies to double-down on their investigation into a possible laboratory leak of the virus responsible for the current pandemic.

New evidence has also been put forward by different media outlets: the Wall Street Journal recently revealed that several WIV researchers became sick in the fall of 2019 with symptoms similar to “both COVID-19 and common seasonal illnesses,” and that at least three were hospitalized, adding support to the need to investigate whether the COVID-19 virus escaped from the Wuhan lab.

The WHO, Biden and Fauci, among others, are calling for further investigation of the hypothesis, and the gain-of-function studies on animal coronaviruses at WIV is central to these inquiries.

Although a conclusive evidence on the origins of SARS-CoV-2 may never be obtained, the latest developments raise new concerns about gain-of-function experiments in general, and may lead to a re-evaluation of both the experimental approach and the safety regulations of the laboratories that use it.