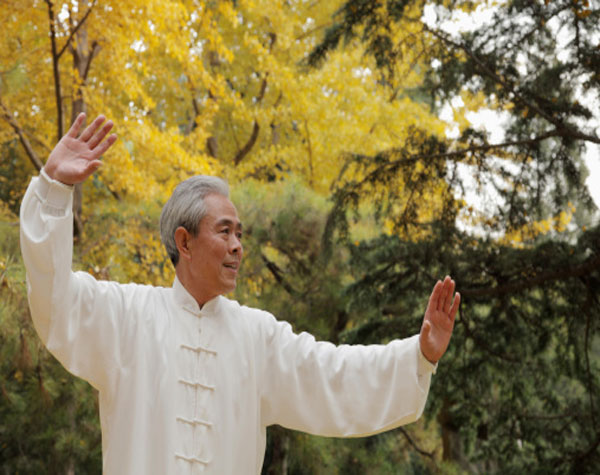 Breathing deeply, eyes relaxed and mind focused, Elizabeth Rubie, a 46-year-old research assistant living with constant back pain, moves her body gracefully and fluidly through a combination of tai chi stances called forms. Around her, other pain sufferers, some unable to walk or stand, have adapted these tai chi movements to their level of activity.

They are patients at Mount Sinai Hospital’s medical tai chi class (www.mountsinai.ca), which was introduced last year. The program, the first of its kind in Toronto, teaches a modified version of the ancient Chinese martial art. Tai chi, known for its slow, continuous, controlled movements, focused meditation and regulated breathing, is being enlisted by Western medicine to help alleviate pain.

“We now have scientific evidence of the medical benefits of tai chi for patients coping with various conditions and suffering with pain,” says Dr. Phillip Peng, an anesthesiologist and pain specialist at Mount Sinai Hospital’s Wasser Pain Management Centre and Toronto Western Hospital, who helped create the program.

“While exercise is important for pain management, physical exertion is challenging to people dealing with pain,” explains Mount Sinai acupuncturist and expert in Chinese medicine Dr. Adam Chen. In 2000, Chen founded the first acupuncture clinic in a Canadian hospital at the Wasser Pain Management Centre. Helping to create the tai chi program marks his second foray integrating East with West.

“Tai chi’s gentle, flowing, non-strenuous moves co-ordinate and benefit the entire body during the exercise,” he explains. “Most importantly, it can be done at your own pace.”

In 2010, The New England Journal of Medicine reported on A Randomized Trial of Tai Chi for Fibromyalgia, a condition characterized by pain in the muscles, ligaments and tendons. The report found fibromyalgia sufferers saw a significant improvement in pain, fatigue, depression, sleep quality and other symptoms when they practised tai chi. By the end of the study, participants in the tai chi group stopped using medication.

Rubie has had similarly encouraging results. “This one activity has replaced chiropractor, massage and yoga, and I can do it every day,” says Rubie. “I can feel the pain leaving my back and neck, shoulders and upper back area where I didn’t even know I had stress. It covers the whole body and lifts your spirits – and it lasts.” For Rubie, tai chi gets her body moving, increases energy and promotes flexibility and strength.

Tai chi is effective for pain management because it’s an exercise as well as a form of mindfulness-based meditation. It helps the practitioner focus on something other than pain – or focus intensely on the pain.

“Ultimately, it’s this mind-body connection that can help ease a patient’s pain,” Peng says. “The goal of medical tai chi isn’t necessarily to decrease the amount of the patient’s pain but rather to increase their cognitive ability to handle it,” he explains. The exercise also helps improve mood and reduce stress, both of which play a role in managing and reducing pain.

Find classes in your area by going online to www.taoist.org.