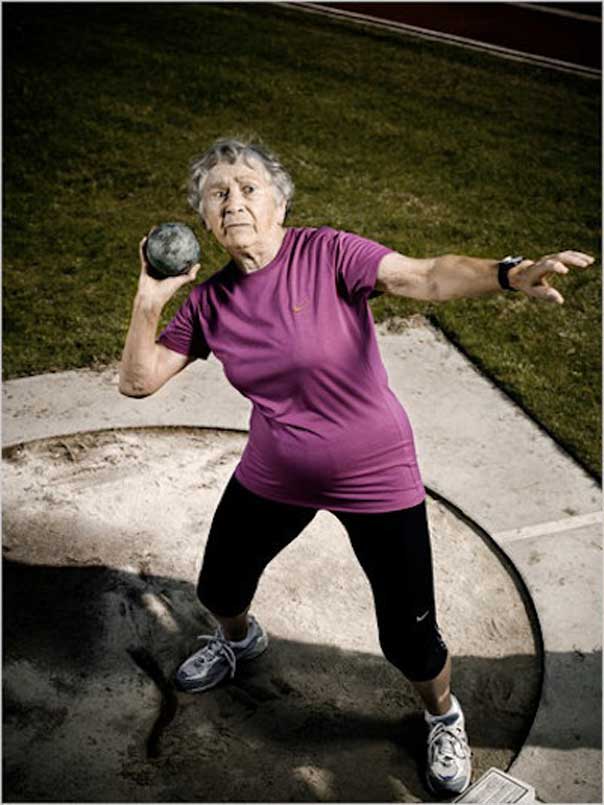 In recognition of National Senior Health & Fitness Day (now in it’s 20th year), check out our slideshow of some of the uplifting Canadian boomer athletes we’ve featured in past issues of Zoomer.

A year after he started training, Earl Fee, of Mississauga, Ont., broke a world record for his age group, running 400 metres indoors. He was 58. “It was such a good feeling to be in shape. After a while, my diet improved, and I started thinking this would make you live longer. All this fitness makes me feel young.”

Now 80, Fee still runs 400, 800 and 1,500 metres and 300-metre hurdles (most recently competing at Lahti, Finland’s World Masters Athletics championships in August). “You lose flexibility, so I try to stretch a couple of times a day,” he says. And he approaches each workout as a body, mind and spirit experience. “Mental training is very important,” the multi-world-record holder says. “If you act confident, it helps your confidence. When you’re thinking of stopping [in a race], it’s usually your mind giving out. You can go much farther than you think you can. I learned that about 50 years ago.”

“Hammer is my favourite,” says Olga Kotelko of West Vancouver, B.C (pictured above). “It’s a six-pound metal ball with a long wire and a triangular hand grip. You swing this around your body, over your head and then you let it go.

It gives me a feeling of freedom, of movement, of grandeur.” At 75, the retired teacher quit slo-pitch, a form of softball, to let someone younger play and eventually found track and field (it had the throwing and running she was used to) and a coach who helped her build strength and avoid injuries. Since she turned 77, Kotelko has been competing in 60-, 200- and 400-metre sprints; throwing the hammer, shot put, javelin, discus and weight; and jumping in three events most of us haven’t tried since high school — triple, high and long jumps.

Workouts include aquafit classes (with weights) three times a week, 10-pin bowling weekly and training solo at a local high school with her “implements.” She’s given away most of her many medals, thrilling winners of sporting events at a church picnic and surprising the Malaysian prince who presented her gold medal at the 2009 World Masters Games in Sydney, Australia. Honoured as an Olympic torch bearer in February, she sees the Ã´ ame as a symbol saluting good health and well-being, something she tries to promote. “It’s not how old we are,” she says. “It’s how we get old.”

Louise McGonigal and Dave Watts, featured in our October 2009 issue

Triathlons aren’t for sissies. And Louise McGonigal and Dave Watts of Elmvale, Ont., are no sissies. Last October, McGonigal, a retired educator, won the Hawaii World Ironman Championship in the 60-65 age group — her 20th Ironman.

They train 12 to 15 hours a week and are already planning for major 2010 Ironman competitions. Competing at an elite level involves the camaraderie of people who don’t associate age with weakness. Watts, a retired contractor, says, “I’ve always trained with younger guys and held my own. “I never thought about age. Now, in my 70s, it’s awesome.”

McGonigal feels maintaining her good health and being strong is part of her identity. “You don’t have control of some aspects of aging but you do control your fitness,” she says. “We’re following our passion and, as I get older, I’m proud of my age.”

Watts sums up his motivation in one word. “Winning!” But McGonigal adds, “We take pride in deteriorating less than our rivals. We’re defying the aging curve.”