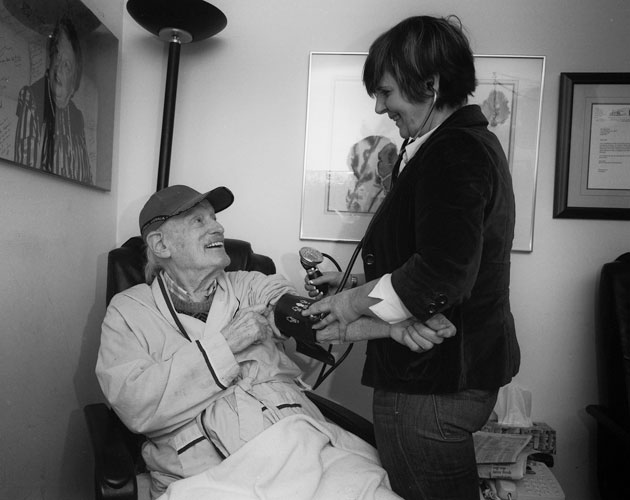 The determined work of two doctors demonstrates a better way to care for frail seniors. The bonus, says Jayne MacAulay, is that it will save money, too.

“Psst, come here. I’ve got to talk to you,” came a quavering voice calling me from the den. At 96, Syd F.’s health was fragile, but his mind was quick and his sense of humour intact. Now he was quite serious. “I just want you to know I love these people,” he said confidentially. “They are the best.”

The people Syd was referring to are those who comprise House Calls, a mobile team of health professionals that cares for frail seniors in Toronto. It’s led by Dr. Mark Nowaczynski and Heather Taylor, a nurse practitioner. I was joining them on this call, trying to get a sense of what first-rate senior care might look like.

I listened as Nowaczynski and Taylor chatted with their patient. Their conversation was teasing and fond and offered Syd reassurance that he would soon be reunited with his wife, Gertrude, 98, who had been moved to a nursing home six weeks earlier when a kidney infection had suddenly sent Syd to hospital.

“What I’m saying, nobody put me up to,” Syd now confided to me. “You understand?” Of course I did. House Calls’ care had given this couple another precious year together in their own home. And incidentally, it had saved  taxpayers thousands of dollars in nursing home costs.

Nowaczynski first started visiting housebound seniors as an office-based family practitioner in 1992. But by 1998, following a political shift in Ontario, he had become frustrated: “I saw many of my patients lose their services and suffer needlessly,” he says. Rather than giving in to disillusionment, he embarked on an unconventional approach he hoped would spark change. He started photographing his patients. “I began to document the issue in the hope that one day I could raise awareness, and these images could contribute to stimulating change,” he says. While his pictures expose the tenuous nature of his patients’ lives, they also show their dignity and worth. The photos led to a Gemini award-winning 2005 National Film Board of Canada film, House Calls, and a display at the Royal Ontario Museum.

“For many of my patients, it’s been a great satisfaction, that they can give back [through the photographs],” he observes. Ultimately, the exposure led to the formation of the House Calls team, which also includes a social worker, occupational therapist, registered nurse, program manager and intake worker. It’s embedded in the non-profit agency, Senior Peoples’ Resources in North Toronto (SPRINT), which provides a variety of supportive services for seniors.

House Calls’ annual budget is $480,000, and Nowaczynski estimates that if his program delays eight long-term care admissions for a year, it will pay for itself. “From a bean-counter point of view, it’s extremely cost-effective,” he notes. Technology adds to efficiency. Electronic records accessible on a laptop keep the team current with each patient’s status.

“Since we launched the fully [provincially] funded program in September 2009, we’ve enrolled close to 300 patients. House Calls’ oldest patient recently died at home at 105, he says. “She was flirting with me two days before her death.”

But it wasn’t until last year that a chance hospital visit of one of Nowaczynski’s patients rounded out the House Calls’ circle of care. The patient was Mr. W., a 101-year-old Second World War refugee from Poland, who had worked as an architect in Canada. In his late 90s, he’d been enrolled in House Calls because of medical issues. One Friday, he had a fall, and his worried son rushed him to Toronto’s Mount Sinai Hospital. In the emergency room, a geriatric emergency management nurse flagged his file for Dr. Samir Sinha, the hospital’s new and forward-thinking director of geriatrics.

By Monday morning, when Sinha met Mr. W., after two days in bed (with the inevitable catheter and IV), he didn’t want to get up. The man who could use his walker the previous Friday now required two people to help him to the bathroom.

Sinha offered two choices: either get moving and return home or expect to go to a nursing home. Sinha had Mr. W.’s catheter removed, had him sit in a chair for meals, had him work with the occupational therapist and physiotherapist and called in a MAUVE (Maximizing Aging Using Volunteer Engagement) volunteer. (The volunteer even turned out to be a Polish speaker.) Sinha consulted Nowaczynski about the patient’s complex pain issues. Two weeks later, Mr. W., using a walker, left the hospital and returned home.

Luckily for him, Sinha is not only a renowned geriatrician but one who had written a blueprint for a comprehensive circle of care for elders that both starts and ends in the community and includes the emergency department, out-patient clinics and in-patient care. This encounter with Mr. W. linked him to Nowaczynski’s House Calls unit – and Sinha quickly recognized it as the perfect vehicle for providing the care beyond the hospital.

Nowaczynski has high praise for Sinha. “He completely gets it. We need to ramp up the expertise of the doctors providing care to seniors, especially with the population aging,” he says.

Sinha believes every hospital in Canada should be a geriatric-centred one. “We’re increasingly learning that bed rest can be the demise of older people,” he notes. Managing geriatric issues and helping these people live at home makes good economic sense as well. “Every patient you prevent from going to a nursing home, just on a yearly basis, saves the system about $70,000,” he says.

Three months later, Sinha made a follow-up visit at Mr. W.’s book-filled condo. (How many specialists make follow-up house visits?) The 101-year-old had been busy writing his memoirs on his computer.

Sinha is both a gerontologist – an expert in the psychological and social aspects of aging – and a geriatrician – an internal medicine specialist trained to diagnose and treat older adults. Typically, older patients have complex medical issues that often require multifaceted care. “Geriatrics is a team sport,” Sinha is fond of saying. This past April, Mount Sinai Hospital opened a 28-bed Acute Care for Elders (ACE) medical unit, with its own team: a nurse practitioner, occupational therapist and social worker. Nurses and other staff on the unit receive 19 hours of advanced training to raise awareness of various geriatric syndromes. Subtle changes like non-glare floors and outlining patients’ room doors in contrasting paint make the ACE unit less difficult for the physically or cognitively impaired.

At the weekly “rounds,” I join Sinha as he meets with his team – which also includes a resident in internal medicine, a pharmacist and the House Calls nurse practitioner – to assess each patient’s progress. It’s where I first heard Heather Taylor mention Syd F. She’d sent him to hospital on New Year’s Eve, delirious as a result of a kidney infection. For years, he’d been the primary caregiver for his wife, Gertrude, who’s been slipping deeper into dementia. While their daughter, Susan, saw to Syd in hospital, Gertrude, who couldn’t be left alone, had to be admitted to a nursing home on a crisis basis. Taylor reports that House Calls is arranging for the couple to be reunited in a long-term care facility.

Back at Syd and Gertrude’s comfortable apartment, Susan, their daughter, is showing me around. She points out a pair of semi-abstract floral water colours above the sofa. “My mother painted these,” she says. More paintings glow in every room, conjuring the cheerful spirit of the talented woman who learned to paint so well at age 65. For the past five years, Susan and her brother have traded nights sleeping on the sofa, guardian angels for their parents.

“It’s amazing they have been able to stay so long in the community,” Susan says. “We’re thankful we’re in Canada, and there are things like House Calls. They sent in a physio and an occupational therapist to see that the house was safe for my mum. I try and picture how I would get my mother to a doctor and my father to the hospital … what if House Calls didn’t exist? My mother would have been gone long ago. Certainly, they would have been gone from their home long ago.”

Three weeks after I met Syd, Gertrude passed away before she could join him in his new long-term care home at Toronto’s renowned Baycrest. Susan reports her gregarious dad is doing well. Syd and Gertrude did see each other one last time. Her last words to him: “I love you.”