Rebirth of Venus – Sex After Menopause 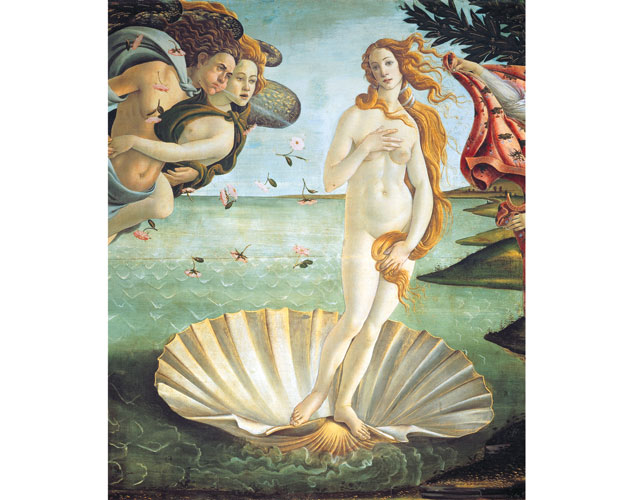 This can be a touchy subject for any post-menopausal woman. Claudia Mann gets frank about sex after menopause and ways you can feel good in bed again.

Here’s how I found out. I was preoccupied with work and family, not paying attention to my own health. Finally, I went for a checkup and mentioned I hadn’t had a period in six months. I’d just turned 51, so it was no big mystery. Back came my blood work: so much for peri-, I was post-menopausal. Wow, game over. My next reaction was relief. No weight gain or mood swings, not one hot flash. I was Ms. Scot-Free, I thought, considering between five to 10 pounds of weight gain can be expected, more than a quarter of post-menopausal women reported depression over a previous two-week period and up to 80 per cent of menopausal women experience hot flashes. Experts say symptoms as minimal as mine aren’t abnormal, but they definitely rank as lucky. If it makes anyone feel any better, I did start getting up to pee twice a night – not a urine control problem (26 per cent) in my case, more so trouble sleeping (43 per cent).

With menopause to wrap my head around, romance was nowhere near my to-do list. My lacklustre attitude probably had something to do with my ex, a gentlemanly type. “It’s better for you if I don’t thrust,” he told me the first time we did It. I never summoned the gumption to tell him I needed some bang to go with the whispering. His prior partner was exactly my age; I guess she knew what I didn’t.

Tailored Shirts and I broke up. I went 16 months without so much as a wink. Then, last summer, I fell deep in crush and lust with a wonderful, vigorous man. By Date No. 4, he was dying to get me naked and vice versa. We were ready for a whole night of … ow, ow, OUCH. Who in God’s name had filled my lady parts with sand? Why did sex suddenly feel like death by a hundred paper cuts?

The answer is that I, like as many as 50 per cent of post-menopausal women, suffer from vulvovaginal atrophy (VVA), recently renamed as genitourinary syndrome of menopause (GSM). Without estrogen to keep your vaginal tissues robust and moist, sex, by which I mean good old friction-based intercourse, can cause itching, burning and pain. “The vaginal tissues dry up,” explains Dr. Susan Goldstein, a Toronto-based menopause practitioner certified by the North American Menopause Society (NAMS). “They get less elastic, thinner and more friable, which means they bleed more easily.” My year-and-a-half of abstinence did more than keep me in the dark – a woman my age needs to use it or lose it. “The more you have intercourse, the more you stimulate local blood circulation, which helps heal the tissues,” advises Goldstein when it comes to mitigating atrophy if not preventing it. Any stimulation is good, human or sex toy. (Take it from me: shower heads set to tepid may be great for multiples but, in retrospect, I should have gone ahead and lost my vibrator virginity.)

With three million women across Canada in menopause, I’m not alone. What else can we million-plus saddled with GSM do about it? “Lubricants during sex” is Goldstein’s first suggestion. “That can give symptom relief. The second step is a polycarbophil over-the-counter vaginal moisturizer you put into the vagina two or three times a week.” A typical example is Replens. “A lot of people think it’s lubricant, but it’s not,” Goldstein clarifies.

Personally, I tried the non-medical route, but my body and lube are enemies no matter how diligently I source water-soluble organics from feminist sex shops. No thank you to a yeast infection on top of everything else. Welcome to my life, Vagifem. For two straight weeks initially, then twice a week indefinitely, I insert a pill in a little blue plunger right where the action is. “Vaginal estrogen is a smaller dose [than oral hormone replacement therapy (HRT)] and locally applied, so you don’t have the risks that we see with breast cancer and other things,” Goldstein explains. What about my beloved? “There’s a short amount of contact and if he washes off afterwards, it’s almost zero,” Goldstein notes a recommendation from NAMS to dose at least 12 hours before coital activity to prevent estrogen absorption by a partner.

Let me put it this way: we’re happier. My knickers are less weirdly sterile than they were once my cycle ended, and my discomfort is 95 per cent reduced. “Putting estrogen in the vagina will heal and replenish the tissue so it will start to get thicker,” confirms Goldstein. “You won’t go back to zero but you’ll certainly be improved.”

Vaginal estrogen also comes as a cream or a ring. “I tried the ring and hated it,” says my surrogate big sister, Fay, 54. “I could always feel it, and it caused cramping. Sometimes, it slipped out during exercise. And the place I actually needed estrogen the most was my vulva. So I said the hell with it.” Fay switched to vaginal estrogen cream with fewer complaints: “Much of the elasticity and so on returns. The downside is that it makes oral sex for him a bit unpleasant though it only seems to hang around maybe a day and a half.”

“When you have a dry vagina, it can be uncomfortable to sit or straddle a bicycle,” Goldstein reveals. “I always ask women about it. Preventative health, just good surveillance and awareness, is important. My argument is you may not be using it now but you don’t know that you may want to in 10 years when you’ve got severe vaginal atrophy, your opening is the size of a dime instead of a quarter. You’re going to say, ‘I met this great guy, I’m 65 and I want to have sex.’ Why not, but now you’re going to have a problem.”

Full disclosure: anyone with GSM is more vulnerable to urinary tract infections (UTIs) – in my case, four in two months. Thankfully, vaginal estrogen medication restores the pH, or acidity, of the vagina, which helps prevent UTIs. Luckily, my guy is a communicator. Cue a bladder-protective talk about bacteria migrating out and in orifices, me needing to pee before and after and showers à deux as foreplay. Add to that the stopping halfway through when things get too much for me, and planning rolls in the hay around pill days. I’ll say this for GSM, it makes inhibition a luxury.

I spoke to Toronto registered sex therapist Adrienne Bairstow about the emotional fallout that can result from painful intercourse. “Women tend to have multiple feelings – disappointment for themselves, disappointment for their partner. They might feel guilty at denying their partner the sex life they used to enjoy. And then they might feel resentment because their partner is disappointed. Sometimes, women end up avoiding all sexual contact. Maybe intercourse was the main event, so they’re not used to finding other ways to experience pleasure.” By the time a couple sees Bairstow, frustration has often leaked out everywhere. “Sometimes, women and their partners even start to avoid non-sexual contact. If I give you a kiss or hug, you might think that means, ‘Hey, hey, tonight we’re going to the bedroom.’ The man can start having problems with erections or ejaculation because sex is no longer just about fun or love.”

But let’s not allow apprehension to rob us of our mojo. The older we all stay sexually active and speak up about the challenges, the more research and expertise there will be.

“People that come here have seen every specialist out there. Pain with intercourse becomes a huge quality-of-life issue,” says Angelique Montano-Bresolin, a pelvic health physiotherapist at Toronto’s Proactive Pelvic Health Centre. “I see people in their 60s and 70s. We can’t reverse the changes that come with the decrease in the estrogen but we can optimize the tissue length and blood flow so it’s more comfortable. I can feel the tissues that are tight, muscles that are weak, and I work with my hands as well as the client to get them on stretches they can do at home.” I’m starting to get it – why not do at least as much for your pelvis as your shoulders? For significant closure of the vagina, Montano-Bresolin prescribes therapy with a dilator like a small vibrator.

My pal Magda is as post-menopausal as me. When Magda and her long-distance ex went six months between visits, she soon realized something was amiss. “I was like a virgin! It was quite painful. I wasn’t lubricating like before, and the muscles were sore afterwards.” At a women’s clinic, Magda was prescribed estrogen gel to rub on her arms daily, plus a progesterone pill to counteract the consequent cancer risks. “I was so sick,” Magda shudders. “My breasts were on fire. I gained weight and felt like I was premenstrual and had bad headaches. This pharmaceutical stuff was hyper-expensive, too. Now I’m putting the highest concentration, purest organic vitamin E liquid in my vagina twice a week – all my natural ecology has come back.” Magda also pops fenugreek, legendarily used by harem women to boost their libido, a remedy she construes as traditional. “I could describe all of these things as alternative, but a lot of them have been around for a long time.”

“What I try to look at is the big picture, not just address the symptoms,” says naturopath Dr. Shawna Darou of Toronto’s Annapurna Naturopathic Women’s Health Clinic. “No. 1, I would test the hormones. The second is the adrenal system. At menopause, what takes over with hormone production are adrenal glands and fat cells. If a woman’s adrenal system is really depleted, meaning she’s had a lot of stress, her menopause symptoms tend to be more dramatic.” Besides balancing the adrenal system, Darou might “support the body’s estrogen production” using herbs like black cohosh, red clover and maca. Darou slips in a recommendation for D-mannose when it comes to UTI treatment for young and old, which prevents E. coli bacteria from sticking to the bladder wall. I will be forever in debt to Darou for that hot tip. However, I doubt I’ll trade Vagifem for a weaker form of estrogen, estriol, mixed as a cream at a compounding pharmacy. I prefer my hormones batch-consistent and subject to randomized control trials.

Not all menopausal women develop GSM. I hope I can take a break from vaginal estrogen eventually but I know GSM unaddressed will progress so that requires careful, ahem, monitoring. For now, sex is something I can look forward to again. What I spend at the drug store ($550 a year), I save on cranberry juice and Astroglide. I try even harder to avoid dehydration in general.

And I know above all to keep blood down there flowing. Use it or lose it is fine and well. What I really want you to know is that if you take action, you get it back.