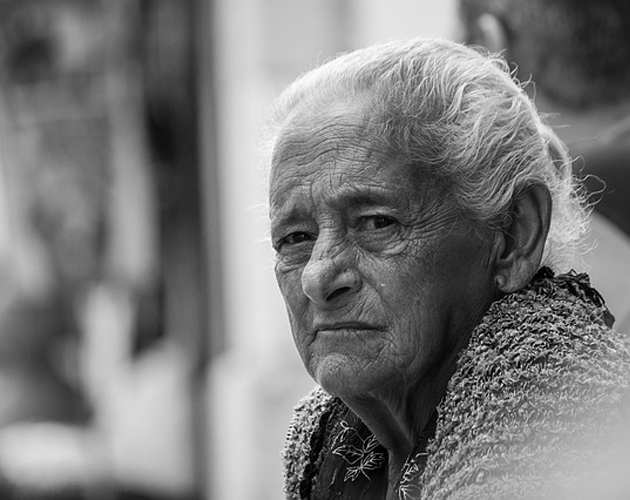 The ultimately fatal assault James Acker endured at the hands of another resident in his nursing home is not an isolated incident. Zoomer‘s own Libby Znaimer looks into the normalization of this kind of violence.

The following article was written before James Acker’s passing on April 18, 2017.

He’s doing well–at least physically–but for 86-year-old James Acker and his family, the nightmare is far from over. It’s been a month (as of this writing) since Acker was viciously attacked by another resident with dementia at his nursing home in Dundas, Ont. The beating left him black and blue and bleeding from the head. At first, his family was told he only had a 50 per cent chance of surviving.

His daughter, Tammy Carbino, describes him as a gentle soul, but after the attack he was agitated and paranoid, displaying behaviour she had never seen before. Thankfully, that has subsided and the bruises have faded. “He’s healed but he’s very depressed,” she told me. And no wonder–Acker is stuck in the Hamilton General Hospital, confined to his bed for his own safety–unless a family member is with him.

Although he was clearly the victim, James Acker is now homeless because his family won’t send him back to the place where his attacker still lives and where procedures have not changed. “They told me it’s as much his home as my father’s,” Carbino said after meeting with management at St. Joseph’s Villa. In Ontario, once you “give up” a bed in long-term care, you go to the bottom of the list. Carbino was told her dad could end up waiting in the hospital for up to a year. Her only hope was to convince the authorities to give his case “crisis status.” That finally happened after he spent 32 days in hospital. “Basically after kicking and screaming–I was just short of throwing myself on the ground,” Carbino said.

This wasn’t the first time Acker was attacked. Back in September, he was sexually assaulted by another fellow resident. The woman walked into his room, ripped his underwear and had his genitals in her hand by the time staff intervened. That, too, can be a symptom of dementia. A CNN study found that between 2013 and 2016, more than 1,000 nursing homes in the United States were cited for failing to report or mishandling allegations of rape, sexual abuse or sexual assault. According to the report, three-quarters of those cases involved residents abusing other residents.

It bears remembering that this is the flip side of a good news story–we are living longer, staying in our homes longer. But as nursing home residents grow older and sicker, we are facing a growing wave of violent dementia in our long-term care homes. Consider the numbers: according to the Ontario Association of Non-Profit Homes and Services for Seniors, 90 per cent of nursing home residents have dementia; 46 per cent have some type of aggressive behaviour; nine per cent exhibit severe aggression.

The numbers are very hard to track – that is part of the problem. The only reliable Canadian statistic for resident-on-resident violence is from 2011, when the University of Toronto’s Institute on the Life Course and Aging found 6,455 cases reported across the country. These ranged from pushing and slapping to extreme violence and murder. According to the Ottawa Citizen, there were 12 resident-on-resident homicides in Ontario between 2014 and 2016. But the Institute’s Lynn McDonald disputes that.

“Homicides are very difficult to determine because often the person may die of a condition that was exacerbated by the abuse so the police can’t really call it a homicide and, in fact, usually won’t,” she told me. A recent report from the Ontario coroner’s office stated: “The approach to persons with dementia who are violent … has resulted in the normalization of violence in long-term care that needs to be addressed.” With dementia rates set to double in the next decade, what kind of future are we looking at?

Carbino was elated when case workers assured her that her dad was moved up to the top of the waiting list – and within days, she found an available room in a home she had approved. But that space went to someone else. “It’s beyond confusing and frustrating,” she says. “Everyone just keeps sending me to the next person. All I keep thinking is if you were 80 years old, the system would just wear you down.”

I am thinking the same thing. But if I am lucky enough to live to 80 or whatever the age where my husband and I can’t live independently, we will not have a Tammy to look after us. It is a truly frightening thought.