Meet The Cardiologist Who Climbs Mountains On Her Down Time 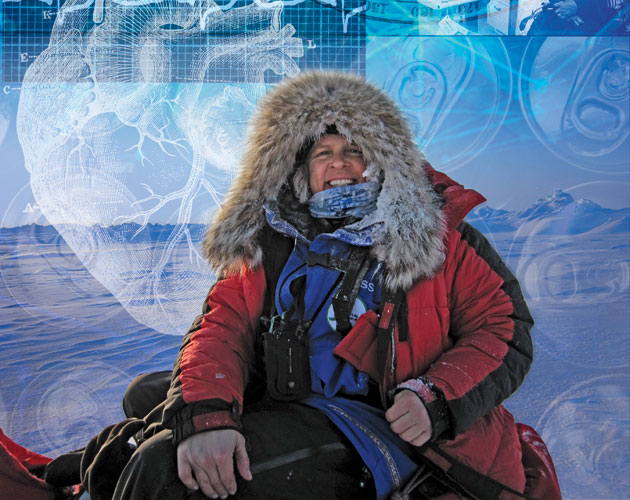 Performing heart transplants would be exciting enough for most—but for Cardiologist Dr. Heather Ross, the adrenaline rush she gets on the job isn’t something she wants a break from.

I’ve been behind the curtain. I’ve seen the stack of flats of pop just inside the door of Dr. Heather Ross’s office at Toronto General Hospital.

“A big Coke fan,” I remark as she escorts me briskly through her department at the Peter Munk Cardiac Centre. “Diet Dr Pepper,” she corrects. Ross, 54, is director of the hospital’s cardiac transplant program. And the skip in her steps comes from more than just a jolt of cola.

“My mom says, even as a kid, I was always on,” Ross says, reflecting on her pace. She still had four or more hours ahead of her as we parted late in the afternoon. A world-renowned cardiologist, she works 10- to 12-hour days seeing about 25 patients before 2 p.m. Add to the list her professorial duties at the University of Toronto faculty of medicine and being head of the Ted Rogers Centre of Excellence in Heart Function. I get the caffeine habit.

It’s a tell that when I ask what’s her favourite part of the day, she responds, “The beginning.” Ross loves her job. She didn’t have a reason why cardiology, initially. But when her grandmother had a massive heart attack and died of heart failure while holding Ross’s hand, her specialty was cemented.

She followed a medical degree from the University of British Columbia with cardiology training at Dalhousie University. Then it was off to Stanford for a post-doctoral fellowship in cardiac transplantation. She also has a master’s in bioethics from U of T. Professionally accomplished, yes. She’ll be fêted at a tribute gala this month.

And then, there’s what Ross does in her off time. Scales mountains. Rides rapids. And skis to the South Pole. Wouldn’t be for everyone but that’s how this self-proclaimed adrenalin junkie takes a break.

Together with transplant survivors, Ross has completed six expeditions for the aptly named Test Your Limits initiative. Ross started it in 2006 to raise awareness and money – $2 million so far – for heart disease and heart failure. After we go to press, she, two transplant recipients and three colleagues will embark on a 1,300-kilometre cycling trip from Lhasa, Tibet, through the Himalayas to Kathmandu, Nepal.

“People may not think I have work-life balance.” Ross says. “But then I get to go off for a month and have these amazing experiences.” Across five continents, she has checked off an impressive bucket list. In 2015, Canadian National Geographic included her on its list of Top 100 Canadian Women Explorers.

But perhaps most impressive – she didn’t quit after the inaugural trip to Antarctica. Ross developed high altitude pulmonary edema during a summit attempt of Vinson Massif, the continent’s highest peak. Oxygen levels drop as fluid builds up in the lungs. The symptoms can be similar to heart failure. And the condition can be fatal – even for otherwise healthy climbers.

Ross detailed the experience in a blog she posts daily during every trip to the Test Your Limits site. She would get within 200 metres but wouldn’t summit and neither would Dale Shippam, Ross’s former patient and a heart transplant survivor. He was fine but refused to continue without Ross. Her eyes glass over as she reflects on it. “I’m laying there, and Dale is looking at me, and I knew he was thinking, ‘You saved me. Now, I’m here to help save you.'” Accompanied by a guide, the two descended safely and Ross was successfully treated.

She explained with a smirk that colleagues seem to make themselves scarce when she starts planning the next trip. Not everyone wants that much excitement. It was a harrowing experience. But it didn’t slow her down. Neither did discovering she has a patent foramen ovale heart defect, referred to commonly as a hole in the heart. It was discovered during a physical in prep for a subsequent expedition.

Even vacations with friends have an element of adventure. “They know I need to start with a day or so of getting my ya-yas out,” she tells me.

Of course, Ross’s day-to-day demands balancing as well. “You can be a part of someone’s life every day, for months. You’re seeing them through their worst days. It’s hard,” she admits. I ask how she copes. “Exercise,” she replies. I shouldn’t be surprised. “I go do an hour or so at the gym and burn it off.” Cycling, swimming, hiking and getting up to the cottage all help, she says – physically and mentally.

“You must have missed the bag of Soma chocolates on my desk,” she adds with a chuckle as we make our way out through the maze of offices and cubicles. It’s the local chocolatier’s dark variety, she assures. We nod over the benefits of that. I point out that it’s high in magnesium, “which can help you relax.” She turns, momentarily, to smile at the irony.

A version of this article appeared in the June 2017 issue with the headline, “The Doctor Is All In,” p. 72.