“OK Boomer” and a Tide of Generational Resentment 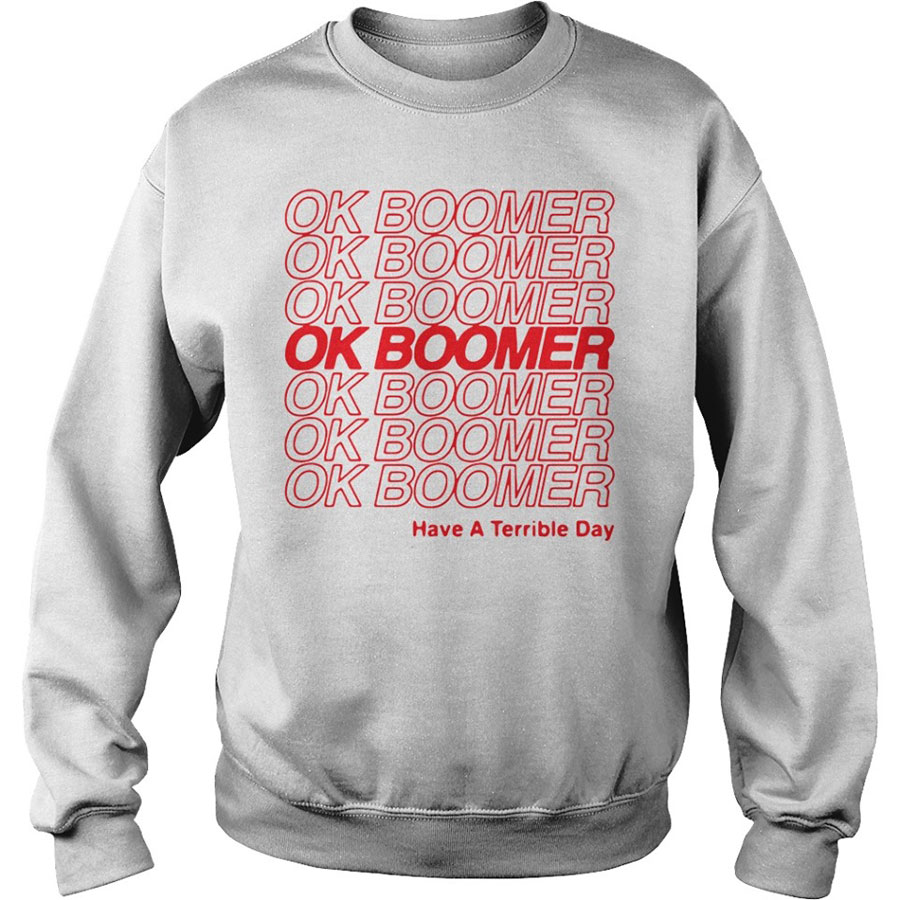 Just in time for Christmas: a generational cold war coming to a T-shirt or hoodie near you. Specifically, it’s the meme “ok boomer,” which has become an online go-to response, particularly by generation Z (those born in 1999 onward), to remarks or posts by baby boomers that they see as dismissive to their generation.

Think of it as an online eye-roll, an expression of exasperated sarcasm, akin to “Okay, dad!” in response to stereotyped guff about a generation that has supposedly helicopter-parented, been given too many participation medals and possessed of entirely too much unearned self-esteem. The resentment is magnified by competition for decent jobs, unpaid internships and a generation of seniors that dominate the culture and are unwilling to retire.

“Ok boomer” started as a meme on the teen-oriented social media platform TikTok and has spread to other platforms, even ones that skew to boomers. Do a search of “ok boomer” on Facebook, and you’ll find numerous pages dedicating to aggregating patronizing posts. One ok boomer wall shows a man of a certain age holding up a sign saying, “Teenagers. Tired of being harassed by your stupid parents? Act now!!! Move out. Get a job. Pay your bills while you still know everything.” One response simply says, “Why are boomers like this?”

Meanwhile, “ok boomer” has inspired a boom in what marketers call “meme merch.” Josh Kelly is the PR manager for Bonfire, a site for selling custom-made apparel by artists. It’s currently promoting tees and hoodies by Shannon O’Connor, a 19-year-old artist who goes by the TikTok handle @toasterpancakes. The tops, bearing the words “ok boomer” and “have a terrible day,” have sold more than 2,100 units in a month online.

“It’s one of those things that launched, and it immediately went to the top of our sales for the day,” Kelly told Zoomer. Recent coverage of the phenomenon in the New York Times and on NBC News has driven sales even higher, he says. “I think the first time I heard the phrase myself was in August of this year. There are a lot of different stories, and everybody’s trying to piece it together.

“I’ve heard people talk about it being a direct response to the term ‘snowflake’ (a right-wing slur for those offended by slurs, usually young, liberals) and things like that. But more generally, it’s kind of a rallying cry of feeling you’re not able to make yourself heard.”

And those clothing sales are only the tip of the iceberg in a merch meme bonanza that includes “ok boomer” fridge magnets, bedsheets, greeting cards, stickers, water bottles and socks. It’s even given birth to an “okay boomer” anthem, produced by college student Jonathan Williams, 20, and remixed by 19-year-old Peter Kuli. (Sample lyrics: “Ur all old and racist, all about that fakeness, Im tryna pay my bills, but im all on the waitlist”).

For many teens now literally wearing their resentment on their sleeves, the sloganeering and marketing may be flip, but the sentiment behind it is serious.

Rose Lamberti, an 18-year-old freshman journalism student at Concordia University, says she doesn’t advertise the phrase on her clothes, “but most of my days are spent with millennials and being taught by boomers. I have used the term [‘ok boomer’] before, mainly in regard to politics. But I have never actually said it directly to the person because I didn’t really want to come off as rude.

“I think a lot of kids nowadays use terms like ‘ok boomer’ and others out of frustration. Our politics, environment, communities and societies are changing, and we’ve become fed up with the dismissiveness and/or ignorance from typically older generations.”

For some boomers, it’s a painful, almost literal reminder of the “don’t trust anybody over 30” days, with our youthful self-importance coming back to haunt us. And as a father of two younger millennial males who work hard, I can’t argue with the fact that we’ve left them a harder row to hoe. They pay more than 10 times the tuition I did, with little but minimum wage jobs to offset the cost in the meantime (by contrast, minimum wage jobs were almost unheard of in my teens; I had a job driving a forklift in a Northern Ontario mill that, each summer, paid my rent and tuition in Toronto for a year — which is arguably an ‘ok boomer’ memory).

Once they graduate, the money they might have put into homes they can’t possibly afford now goes to student debt.

And the rage-against-the-grandparents seems especially unfortunate, given the possible bridges that could be built between the youngest and oldest activist demographics.

Jane Fonda, 81, was recently arrested at a climate change demonstration (Ted Danson, 71, did likewise last week), even as 16-year-old Greta Thunberg was touring North America, eventually heading into Alberta, the heart of fossil fuel country, with her angry pleas to address climate change. Neil Young, 73, has recently announced he’s finally getting his U.S. citizenship so he can vote for the candidate most committed to climate change policies.

On the non-celebrity front, there’s the 100 Grannies environmental group or the 540 Swiss senior citizens who crashed the World Economic Forum on climate change in Davos, Switzerland — baskets of homemade biscuits in hand — to demand action. All of which puts the lie to the “old, content, uncaring boomer” stereotype as surely as any levelled at the youngest cohort.

If you have a social conscience, you don’t want to leave a degraded world to the young, and they don’t want to inherit one. The alternative is to let resentment harden, possibly to the point where we might find our walkers kicked out from under us by dint of the year of our birth.

And like most memes, “ok boomer” will likely have its day. Rose’s 24-year-old brother Dylan, a communications consultant in Toronto, says the phrase may already be becoming passe now that the mainstream media has discovered it, though the sentiment behind it won’t fade as fast.

“There’s a lot of frustration over the economy and increasing inequality,” he says. “So, when we hear things like, ‘Pull yourself up by your bootstraps,’ when you’re tens of thousands of dollars in debt, it just sounds like tone-deafness to the way things really are.”