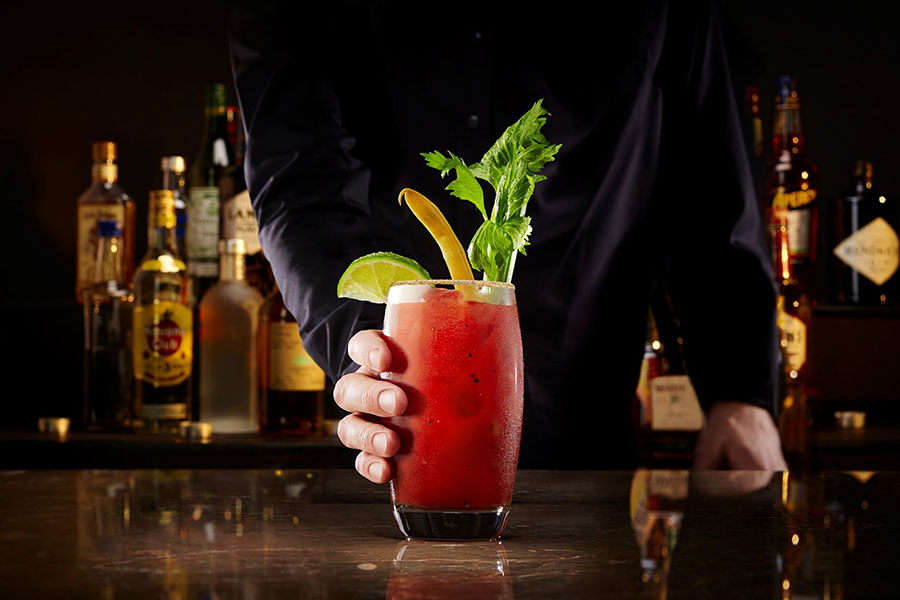 With the NHL returning to action and the playoffs beginning, we're putting together a list of cocktails inspired by your favourite Canadian teams. Photo: Courtesy of Polar Ice Vodka

Right now, hockey night in Canada is every night. The boys are finally back on the ice after a four-month shut-down due to the pandemic, so why not cheer on your favourite team by raising a glass?

Our Canadian teams are competing for those coveted playoff spots, and the mixologists at Corby Spirit and Wine have created a sort of competition all their own — cocktails inspired by their favourite Canadian NHL teams. And we’ve got their playbook and are ready to share.

Habs fan? There’s a cocktail for that! Can’t get enough of the Leafs? Just add ice and whisky. Calgary got your game on? Sip on a Caesar in the place it was invented. You can find your favourite Canadian team and their corresponding cocktail below.

From there, get your social bubble together for the game or book a Zoom gathering between periods and assign a cocktail for each of your friends to try, create, share or bring along. While you’re at it, keep the positive vibes going and hope that one of our Canadian teams will break the 27-year drought and bring the Stanley Cup home to the Great White North.

In keeping with the team’s nickname, try a Habitant, created by Larry Dennis of the Seignory Club at the Log Chateau in Quebec. In a cocktail shaker, mix two parts Pike Creek Whisky, ¾ of a part each of fresh lemon juice and maple syrup and two dashes of Peychaud’s Bitters. Add ice, shake and strain into a chilled glass.

Mix up a cocktail named after the city itself, Toronto, made with the city’s original whisky, Gooderham & Worts, and taken from The Fine Art of Mixing Drinks by Dave Embury, first published in 1948. In a mixing glass, pour two parts G&W with ¼ part Fernet Branca, ¼ part Demerara Syrup and two dashes of Angostura Bitters. Add ice and stir; then strain into a chilled glass. Squeeze zest across the drink, give it a twist and place in the drink.

Pour the Jets’ jersey into a glass with a Blue, White and Red cocktail. The process of making this drink is key. In a highball glass, pour one ounce of grenadine for the bottom layer, then fill the glass with ice. In a shaker filled with ice, combine a shot of vodka with three ounces of lemonade and shake until chilled. Press the back of a spoon against the inside of the glass just above the grenadine, and carefully pour the vodka-lemonade mixture into the glass. Measure out one ounce of blue curacao, and gently pour it into the glass, also over the back of a spoon.

Join the Oilers’ Orange Crush with the drink of the same name. To mix a simple Orange Crush, in a shaker with ice, pour a shot of Polar Ice Vodka and three ounces of orange juice (or the juice of one large navel orange). Shake and strain into a chilled glass with ice. Top with lemon-lime soda and enjoy.

Canada’s signature drink, the Caesar, was first crafted in a Calgary hotel more than 50 years ago. For the classic, rim a tall glass with a lime and celery salt. Add ice, a dash of Worcestershire sauce and hot sauce, salt, pepper, a shot of Polar Ice vodka and clamato juice. Garnish with a stalk of celery and lime wedge.

Named after a slang term for a Canadian, the J.P. Wiser’s Strong and Free is a great match with the Canucks. This bright and bubbly drink is made by combining a shot of J.P. Wiser’s Triple Barrel Rye with a shot each of Aperol and Dubonnet and two shots of sparkling wine in a highball glass with ice. Stir and garnish with an orange slice.