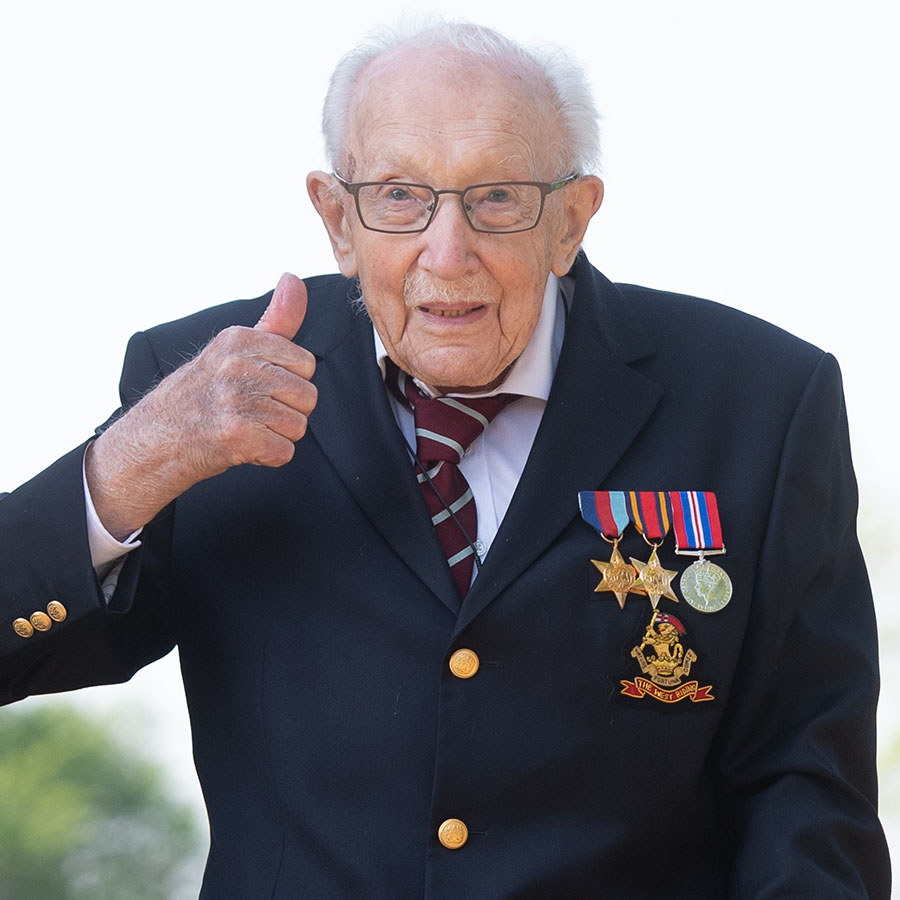 Over the last 12 months, a number of inspirational, good news stories — like that of Sir Captain Tom Moore, above — helped provide a glimmer of light in an otherwise bad news year. Photo: Joe Giddens / PA Images via Getty Images

Finally 2020 has been kicked to the curb, and few were sorry to see it go. It did, however, teach us a few lessons. Self-isolation took patience; we realized how much we missed close contact with family and friends; we had to devise new routines; share what we could — time, money, conversation (all remotely) — with people in need. We needed humour, nature, and inspiration and most of all, hope.

The new vaccines will help, but COVID-19’s not done with us yet.

That said, it’s easy to get bogged down in the deluge of dire pandemic news. But over the last 12 months a number of inspirational, good news stories helped provide a glimmer of light in an otherwise bad news year — a reminder that there’s still kindness and love in the world. Here, we revisit some of our favourite.

Capt. Sir Tom Moore has an uplifting ring to it, especially for a man whose motto is “Tomorrow is a good day.”

In April 2020, Tom Moore, 99, took up a challenge to walk 2.5 kilometres — 100 laps of his garden walkway — to raise £1,000 to support England’s National Health Service, which helped him heal from a broken hip, rib and punctured lung. The daily sight of the Second World War army captain steadfastly pushing his walker around his garden quickly boosted donations to almost £33 million (more than C$54 million) by April 30, his 100th birthday, during which an RAF fly-past and greetings from Queen Elizabeth II saluted him. But Her Majesty, a veteran herself, wasn’t done. In a private socially distanced ceremony in July at Windsor Castle’s Quadrangle, she knighted Moore.

To cap off the year, Capt. Tom, as Moore became affectionately known, graced the cover of GQ magazine’s January/February 2021 issue in a Hugo Boss suit while draped in the Union Jack flag as one of its Men of the Year — specifically, the Inspiration of the Year — in recognition of “his incredible fundraising feat.” At 100, he became the magazine’s oldest ever cover subject.

Shovels and their famous sense of humour helped people in southeast Newfoundland cope in the aftermath of a fierce “bomb-cyclone” storm in mid-January. Winds cemented record snowfall into drifts up to five metres high, so doors opened to packed walls of snow. Cars were buried, streets impassable, a state of emergency prevailed and, yes Toronto, they called in the army to help reach people trapped in their homes.

Then the fun began — skiing and snowboarding down St. John’s hillside streets; organizing aid to people alone and disabled; digging down a storey to reach someone’s mother’s front door; and once a few stores opened, picking up essentials (often “storm” chips and beer) and whatever real food was available.

While the storm’s aftermath looked overwhelming on national news stories, Newfoundlanders also seemed to be facing their tasks with energy and hilarity. One could almost wish to be there. At the very least it seemed a tempting summer destination — and then in March, the pandemic put an end to thoughts of travel. It should be on your bucket list.

The daily walk brought a happy new phenomenon this past spring — a profusion of tail-wagging puppies straining at leashes, hoping to lick any self-distancing human in their path. Stuck-at-home folks wanted pets, and breeders and rescue organizations were inundated with applications. More than half of Canadian households have a pet (usually a cat or dog) and, reports Narrative Research, 18 per cent of those homes took one on after the pandemic began.

New Zealand’s government recognized the threat from COVID-19 in January 2020, and began to ready hospitals and border controls. On March 26, bolstered by science, it began a countrywide lockdown. By June 8, the disease had been halted there. Prime Minister Jacinda Ardern’s clear, consistent “I’ve got your back” communication style helped the population, her “team of five million,” to buy into the control measures. (She had won New Zealanders’ trust in March 2019, when fifty Muslims were shot in Christchurch and she displayed compassion and strength, then followed up with a ban of assault rifles and semi-automatic handguns.)

A growing number of centenarians and supercentenarians (aged 110+) — some who lived during the Spanish Flu pandemic (1918-1920) — have survived bouts of COVID-19, the eldest an Ethiopian monk believed to be 114. He spent three weeks in hospital, while 113-year-old Maria Branyas of Spain had only mild symptoms. Like Branyas, Ada Zanusso, 103, had mild symptoms, but had also survived the Spanish flu as a child. In April, Britain’s oldest COVID-19 survivor, Connie Titchen, 106, was discharged after three weeks in hospital in Birmingham.

And New Yorker Angelina Friedman, 102 and another Spanish Flu survivor, beat the virus twice in 2020.

So why have these centenarians survived COVID-19 infection when so many elderly have not? A Brazilian scientist at the University of São Paulo believes they made it to 100 because they have a combination of genes that protect them from such challenges. Her research continues at the Human Genome and Stem-Cell Research Center.

Ain’t No Stopping This 91-Year-Old

He’d called the hospital for an appointment after hearing the first shots would be available for seniors on that day. “Of course, I couldn’t damn well find any place to park my car, so I was late,” he groused.

Kenyon wasn’t impressed by the prosaic card for the follow-up shot, but he’ll show up. “There’s no point in dying now when I’ve lived this long, is there?”

There’s global warming, and then there’s “Don’t let the Pfizer-BioNTech COVID-19 vaccine melt!” The precious substance being transported to vaccination sites must be kept at -70 C (±10 C), so most distribution locations need ultra-low temperature freezers.

Meanwhile, Jason Tompkins operates a tuna processing company in tiny North Lake, P.E.I., (pop. 27) and won’t need his four state-of-the-art freezers until summer. So he donated two of them — carefully encased in bubble wrap — and they were gratefully received in Charlottetown in early December 2020. Tomkins has refused rental payments for them, saying, “We’re all kind of working together to stem the tide of this virus.” His home province of New Brunswick is considering a similar offer from Tomkins.

Celebrating Heroes Past and Present

Stuck at home and feeling helpless, there was one thing people around the world did to raise spirits and express gratitude for the front-liners: the health care staff, grocery workers, first responders, truckers and others at risk during a dangerous time. All it took was a pot and something to beat it with, usually at 7 p.m. Enthusiastic percussion to soothe the soul!

Lest they be forgotten, the small town of Uxbridge, Ont., paid a socially distanced tribute to about 30 veterans on the sunny Sunday before Remembrance Day. Nearly 2,500 vehicles, many decorated with poppies and signs of appreciation, paraded through the town’s main park past local veterans that included 13 Second World War veterans (four of them women).

Perhaps no one enjoyed the greetings from friends and strangers more than the eldest – Doris Clark, 101, who served in the Women’s Land Army, one of more than 80,000 women tasked with maximizing Britain’s food production.

2020 was unquestionably the year of Zoom. The video chat service has become the popular connector for staying-at-home grandparents, teachers and pupils, as well as anyone working from home — or working up a sweat in a virtual exercise class. But admit it — we’ve become a nation of voyeurs, checking out the background décor or books behind TV pundits.

And if you can’t be bothered tidying what shows up behind you, with a click you can change your background to a beach.

To look good, set your device’s camera at eye level and light your face from the front. And if you’ve had a rough day, try Zoom’s answer to plastic surgery, the “touch up my appearance” filter that virtually airbrushes your appearance.

Greenhouse owners feared no buyers would venture out to buy plants early in the spring. Wrong. We planted veggies, brightened up flowerbeds, and tended lawns relentlessly

The initial global shutdown gave us a glimpse of our planet’s resilience as pollution levels dropped and non-humans took advantage of the temporary quiet. Marine animals frolicked in once busy shipping lanes, no doubt rejoicing in the reduction of underwater noise. Toronto even fenced off part of the boardwalk in the popular Beaches neighbourhood to keep a family of foxes from being disturbed.

And when the seasons changed, hot summers and just enough rainfall in many parts of Canada bought us a long, glorious autumn. Ontario’s trees blazed with red, orange and gold for weeks making a drive in the country perfect for buoying mental health.

In December, some small businesses in Toronto, Calgary, Halifax and Vancouver noticed a welcome uptick in online sales. Ali Haberstroh, a social media manager in Toronto had created not-amazon.ca, to help small Toronto businesses, (particularly BIPOC entrepreneurs) survive during the pandemic. The three other cities were soon added, but Haberstroh can’t accommodate more. It’s a labour of love for her — and free for businesses. As well, shoppers can submit their favourite local shops for inclusion.