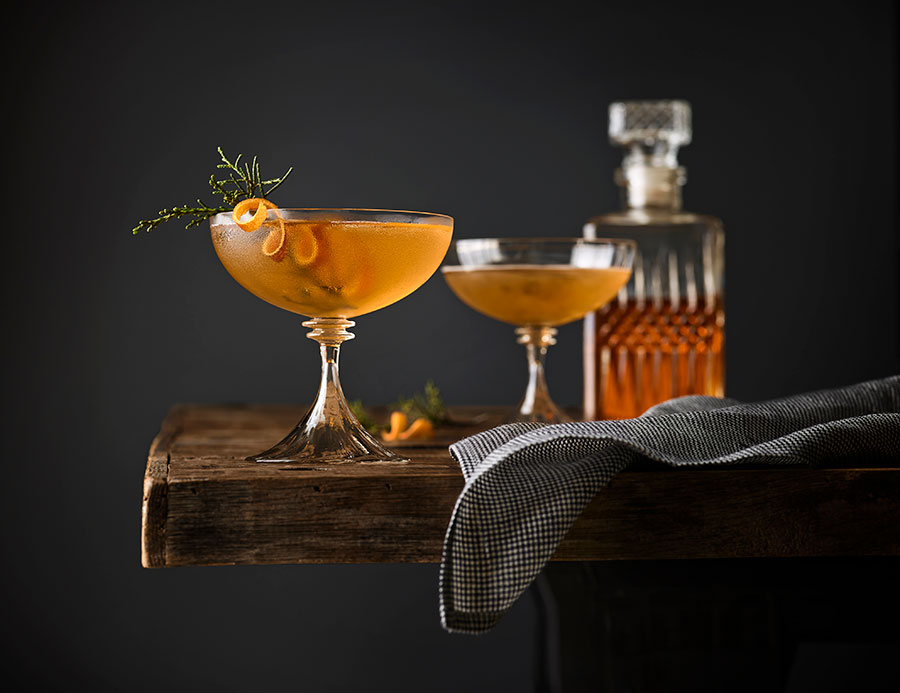 Celebrate Canadian whisky with a selection of cocktails that prove you don't have to enjoy this spirit neat or on the rocks. Photo: Annabelle Breakey/Getty Images

We may not be able to savour a wee dram in Scotland for World Whisky Day today, but you could do worse than to mix up a few cocktails with spirits made right here at home.

In our recent reality of revisiting and also binge watching some of our favourite shows, say Boardwalk Empire or Mad Men, the scandalous images of bootlegging in times of strict prohibition and day-drinking in the still-conservative, pre-swinging early 1960s loom large. In both of these shows, Canadian Club is the spirit of choice — in fact, it was the No. 1 smuggled whisky in the world during the 1920s in the U.S. — a nod to the quality of rye (a key ingredient in most Canadian whisky blends) that’s grown in our Great White North. And, like the North, there’s still a bit of myth and mystery around the spirit. One of these myths is that whisky is only sipped neat or on the rocks. Well, there is some merit to that thought for purists but also a bit of bunk, according to mixologists and distillers alike. The whisky cocktail is an easier drinking way to shake things up a bit. May we suggest trying one or all of these recipes at home, using Canadian booze, of course.

Provenance: Founded in Grimsby, Ont., by winemaker John Hall in 1992

Notes From the Distiller: “The art and skill of blending is to take parts and put them together in a way that the sum is better than the individual,” says Bill Ashburn, master blender. “Just because a product is a single grain rye doesn’t mean it’s better than a blend.”

Stir all ingredients in a mixing jar over ice. Serve straight up in a chilled coupe glass. Garnish with an orange twist.

Provenance: Ten years after opening a winery, the Great One launched the Gretzky Winery and Distillery in 2017, in Niagara-on-the-Lake, Ont.

Notes From the Distiller: Red Cask comes from grains grown in the same soil as the vineyard’s grapes and is finished in red wine casks. “Whatever your craft,” says Gretzky, “do it well.”

In a mason jar half-filled with ice, combine simple syrup, whisky, lime juice and orange slice. Screw on the lid and shake until chilled. Top with lager, stir, sip and enjoy. (If you’ve chosen No. 99 Pale Ale, simply muddle in one more orange slice for balance.)

*If you can’t get to Gretzky’s Distillery, make ginger simple syrup (for plain simple syrup, omit the ginger) at home.

In a small saucepan, bring ginger, sugar and water to a simmer over medium-low heat, stirring until sugar dissolves. Simmer gently for 30 minutes. Strain,
reserve ginger for another use and let cool to room temperature.

Notes From the Distiller: Crafted from a single grain, this award-winning 100 per cent rye whisky features the spiciness of rye grain with hints of toasted toffee, while preserving Canadian Club’s characteristic smoothness.

Zest lemon peel over rim of glass. Serve straight or on the rocks.

Provenance: Gimli, Man., on the shores of Lake Winnipeg

Notes From the Distiller: Using the naturally limestone-filtered water from the lake, this blend of 50 whiskies – with Crown Royal hand-selected barrel Canadian whisky at its heart – the Coffey rye whisky was distilled in the Coffey Still to commemorate the first grand tour of Canada by King George VI and Queen Elizabeth in 1939. Bottled in cut glass, shaped into that of a crown and packaged in a purple “robe,” it was placed on the royal train as a symbol of the genuine nature of the Canadian people.

Pour whisky into an ice-filled highball class. Add grenadine and club soda and stir. Garnish with a lime wedge.

But first, we’ll take a Manhattan.

Notes From the Distiller: The whisky brand was born in 1857, making it Canada’s oldest continuously produced whisky. These premixed versions of the classic cocktails include J.P. Wiser’s whisky, orange essence (Old Fashioned), vermouth (Manhattan), water, a hint of sugar and natural flavours. Simply pour over ice, stir and garnish with a cherry or an orange twist. P.S. Once we get back to visiting friends and family, this makes the perfect BYOB.

A version of this article appeared in the July/August 2020 issue with the headline, “Whisky à Gogo,” p. 84.

3 Cocktails With a Watermelon Twist