Head Over Wheels: 6 Canadian Vintage Truck Owners Tell Us How They Fell in Love With Their Ride 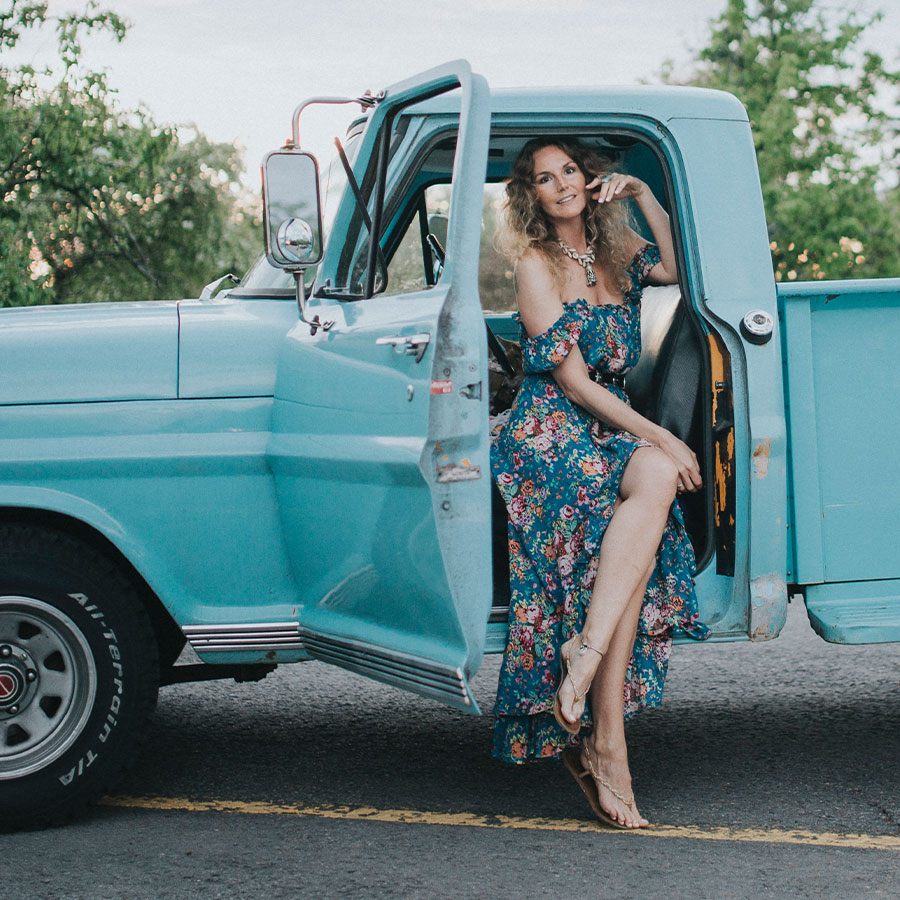 There’s something beautiful about an old truck. Purists call them vintage, classic or antique, depending on the era, but for most of us, it’s all about the blast from the past when we see — and hear — one drive by. For those who have caught the bug, it can be love at first sight or a lingering fever. Truck love runs deep.

“People collect cars [and trucks] that appealed to them in their youth,” explains David Sanders, the proud owner of a 1987 El Camino. He’s wanted one ever since his little sister gave him a Hot Wheels version as a present when they were kids (and still owns).

People who weren’t born when some of these vehicles rolled off the production line are drawn to them, too. “To the younger generation, it’s a good-looking truck,” says Roger Albert. His 1969 Ford Bronco is a cherished member of the family, and proudly driven by his kids. “Someone might see it in a parking lot, and I’ll hear them say, ‘Man, that’s cool.’” Cool enough for Lady Gaga, 35, who is often spotted driving a baby blue 1967 Bronco and a heavily modified 1970 El Camino — with a 350-horsepower V8 engine — around L.A.

The appetite for vintage trucks has driven prices into the stratosphere; good luck finding one in decent shape. Rebuilds or “resto mods” — fitted with conveniences like air conditioning, Bluetooth radios and power steering — fetch six figures. All-original examples in pristine shape can cost much, much more. After a 24-year hiatus, Ford has brought the Bronco back to life for 2021, but it doesn’t much appeal to the vintage fan. “I don’t go for cookie-cutter cars,” says John G. Stirling, whose highly modified 1960 Ford F100 is anything but.

Trucks made to climb mountains or carve paths off-road require a lot of juice to power their all-wheel or four-wheel drivetrains. Former St. John’s native Dave Sweetapple pays about $43 to put diesel in his 1995 Land Rover Defender and uses nine litres per 100 kilometres, while his daily ride, a 2010 Land Rover LR4, costs about $72 to fill and uses 16 l/100 km. For comparison’s sake, fuel economy on a gas-electric hybrid like the Toyota Prius PHEV can be as good as 1.7 l/100 km, but you won’t be driving that anywhere but a smooth blacktop. “Rover people are very environmentally conscious, and we value nature and want to get outside as much as possible,” says Sweetapple. “If something breaks, I can get out my tool kit and get my truck running again, and I don’t have to worry about batteries and electronics that will be with us forever.” As Sweetapple says, “It’s really about a lifestyle.”

These trucks are “wants” not “needs.” At least, they started out that way. “I didn’t even need a car, let alone a vintage truck,” says Renee Theoret, “but now I’m obsessed.” This rock-’n’-roll-loving country girl even tattooed a 1950s-style, powder-blue pickup across her back in homage to her 1967 Ford F100. People leave notes on her windshield asking if she’ll sell her baby, but there’s no way. “It’s fun in the summer with the windows rolled down, and people yell at you and ask about it,” Theoret says. “Now my friends want one.”

Read on to find out how these enthusiasts met their matches and fell head over wheels in love with their rides.

Theoret grew up watching The Dukes of Hazzard, falling hard for Daisy Duke’ Jeep and the Duke brothers’ 1969 Dodge Charger. This Quebec-born, farm-girl’s passion for cool cars and trucks is genuine. “Every time we’d go to Home Hardware I’d bug dad for another Hot Wheels,” she says. Now in Ottawa, she wasn’t looking for a truck or even a car and didn’t need one. But when she saw a Ford F100 in the pages of a buy-and-sell newspaper, she decided, “That’s my truck,” and paid $5,000, cash. “The owner turns around and he’s crying. It was his wife’s truck and she passed away. People were offering him a lot more money, but he wanted to sell it to a woman.” She’s now obsessed with vintage trucks. “You feel f****g cool when you’re driving. My friends love getting picked up — they hear her coming down the street.” A few improvements — an automatic carburetor, power brakes and power steering — made “Lucille,” named after her grandmother, easier to handle. “I’m never gonna sell her. She’s a pain in the ass, and she’s left me stranded in a ditch. But I have CAA and I stay in my tow zone.”

When you’re not precious about a truck, you can turn it into anything you want. That’s what Stirling has done, although, truth be told, he’s not much of a Ford fan. He spotted the truck in a farmer’s field, tracked down the owner, and thus began “a 17-year ordeal.” That was pre-Internet. “You’d go to a store and nobody has the parts. But that’s the fun of it, the hunting. And you get a whole bunch of new best friends.” He’s put more than $100,000 into “LeRoy” over the years: a slapstick automatic transmission, A/C, front disc brakes, bucket seats, power windows, steering and door locks and air horns lifted from an 18-wheeler. And how’s this for cool: the rear license plate disappears when he cuts the engine. “It’s Ford tough, with a whole lot of Chevy stuff,” he likes to say. A 300-horsepower Ford Thunderbird engine gives LeRoy plenty of kick, but he’s also added mirror-finished stainless steel above the back bumper. “So that if anyone flashes their high beams because I’m going too slow, they’ll get it right back. They only ever do it once.”

Sweetapple was visiting his folks in St. John’s in 1989 when he spotted an old Land Rover on a car lot. He had it shipped to Montreal, then drove up from his home in Boston to pick it up. “It was five hours to get there, and three days to get home,” he laughs. “It caught fire.” He had always been fascinated by the British off-roaders, and Newfoundland was one of the biggest importers until Land Rover pulled out of North America in 1974. Now, he and his wife Robin are obsessive collectors. He rents a garage to house multiple vehicles in various stages of re-animation, and does the work himself with the aid of local experts. The Rovers Magazine writer goes by the handle @vermontrovers on Instagram, and recently returned from a three-day parts-shopping excursion across three adjacent states. “I didn’t expect to spend $5,000 this weekend,” he says. “That’s what happens when you’re hunting parts. You see something and you start to tremble … it’s getting out of control.”

Toyota’s off-road beast is a coveted utility vehicle among people who drive them as hard as Lindenaar does. She needed a serious truck for her outdoor adventures on Vancouver Island, and she knew where to find one. “My aunt’s best friend. She did not want to sell it. Lots of people came knocking on her door asking to buy it. The only reason she agreed to sell it to me was because she knew me.” Her “driving tractor” was green with moss when she got it, so her friends call it “Swamp Thing.” Now it needs a water pump, but they’re hard to come by at any price. “We call it the Toyota tax in B.C.,” she says. “The demand for Toyotas and any off-road vehicle has jumped dramatically over the past couple years.” There’s a similar truck for sale in Nanaimo for $30,000, but “I couldn’t see myself selling my truck,” she says. “I have a lot of adventures planned for us … I hope to go to the end of the Alaska Highway with her once the borders open. I have seen more of the island in the last two years than I had in my whole life, and I plan to keep exploring it.”

Albert’s dad was a mechanic, so he grew up around cars and trucks. He owned a Ford Bronco in the 1970s, and by the late ’80s, he wanted one again. When he was 34, he found a clean, rust-free, 1969 Bronco in Halifax, which had made its way there from California. “Back then they weren’t popular,” he says, “but then I noticed I’d be driving down the streets and heads would turn.” Albert enjoys the social aspect that comes with the truck. “Eventually you get involved in these clubs, you meet people. Everywhere I travel, I track down local clubs, museums and shows.” The Bronco is as practical as it is beautiful, a utility vehicle that is good for off-road adventures as well as city driving. “The thing’s not perfect, but that’s how I want it. I drive it, and I used to go play in the woods in that thing. And every year I’d do a little bit of work, spend $1,000 here and there.” He paid $2,200 for the truck and recently had it valued at close to $50,000. Not that it’s for sale. “It’s a family thing. My daughter drove that truck to her graduation.”

Sanders’ cousin used to sell El Caminos, the car-truck hybrid discontinued in 1987. “They aren’t much of a car,” his cousin told him. “They aren’t much of a truck either.” It may have been the butt of jokes in its time, but these days a pristine El Camino commands respect on the road. “My best friend told me it’d never haul more than a bundle of pencils, so I’m obliged to send him a photo whenever I load it up,” Sanders says, adding it’s “no trailer queen” — a derisive term for vehicles that owners dare not drive for fear of marring their perfection. He brings the El Camino out every spring — “it feels special, and everybody waves when they see it” — and puts it to work during the summer, moving stuff. “It’s fun to see how the younger generation reacts. I drove by some young kids and heard one of them say, ‘That is badass.’” People often approach him with questions or reminiscences, which “is
a lot of fun, unless you’re
in a hurry.

A version this article appeared in the June/July 2021 issue with the headline “Keep on Truckin’,” p. 21.

A Certain Vintage: Falling in Love with the Art of Antiquing