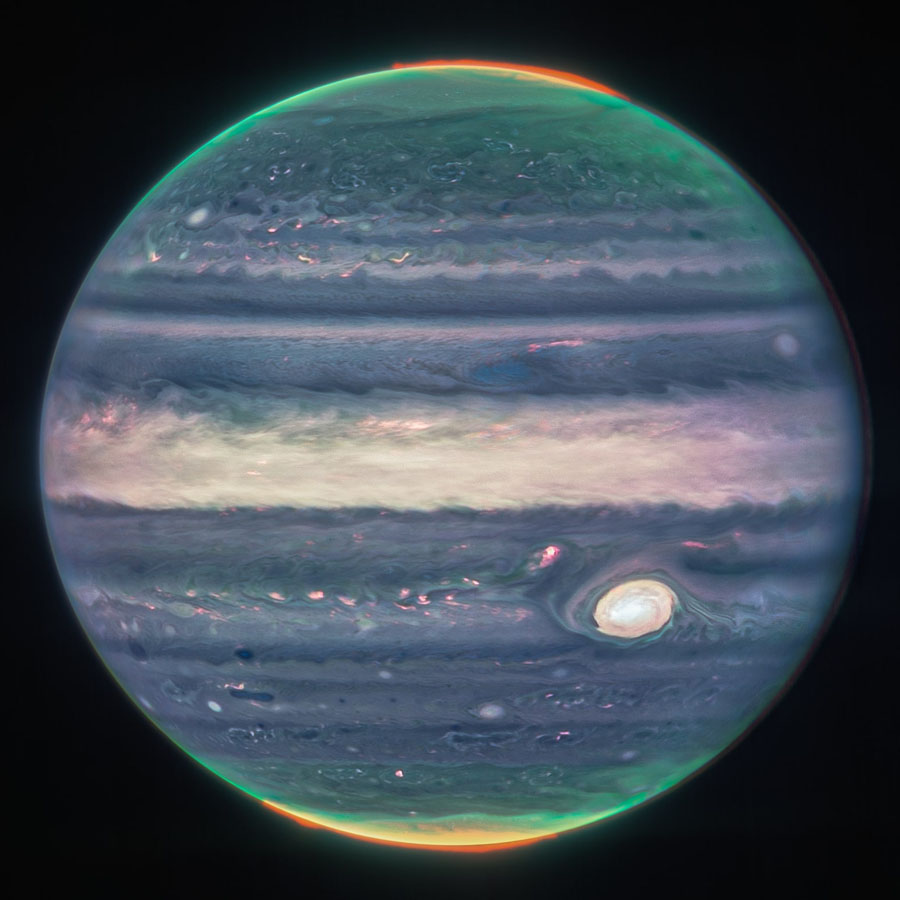 This photo, released by NASA, shows a composite of Jupiter made up of images captured by the James Webb Telescope using three different filters. Photo: NASA/ESA/CSA/Jupiter ERS Team/Judy Schmidt/Cover Images

“We hadn’t really expected it to be this good, to be honest,” said planetary astronomer Imke de Pater, professor emerita of the University of California, Berkeley. De Pater led the observations of Jupiter with Thierry Fouchet, a professor at the Paris Observatory, as part of an international collaboration for Webb’s Early Release Science program.

Webb itself is an international mission led by NASA with its partners ESA (European Space Agency) and CSA (Canadian Space Agency). “It’s really remarkable that we can see details on Jupiter together with its rings, tiny satellites, and even galaxies in one image,” she said.

The two images come from the observatory’s Near-Infrared Camera (NIRCam), which has three specialized infrared filters that showcase details of the planet. Since infrared light is invisible to the human eye, the light has been mapped onto the visible spectrum. Generally, the longest wavelengths appear redder and the shortest wavelengths are shown as more blue. Scientists collaborated with citizen scientist Judy Schmidt to translate the Webb data into images.

In the standalone view of Jupiter, created from a composite of several images from Webb, auroras extend to high altitudes above both the northern and southern poles of Jupiter. The auroras shine in a filter that is mapped to redder colours, which also highlights light reflected from lower clouds and upper hazes. A different filter, mapped to yellows and greens, shows hazes swirling around the northern and southern poles. A third filter, mapped to blues, showcases light that is reflected from a deeper main cloud.

The Great Red Spot, a famous storm so big it could swallow Earth, appears white in these views, as do other clouds, because they are reflecting a lot of sunlight.

By contrast, dark ribbons north of the equatorial region have little cloud cover. In a wide-field view, Webb sees Jupiter with its faint rings, which are a million times fainter than the planet, and two tiny moons called Amalthea and Adrastea. The fuzzy spots in the lower background are likely galaxies “photobombing” this Jovian view.

“This one image sums up the science of our Jupiter system program, which studies the dynamics and chemistry of Jupiter itself, its rings, and its satellite system,” Fouchet said.