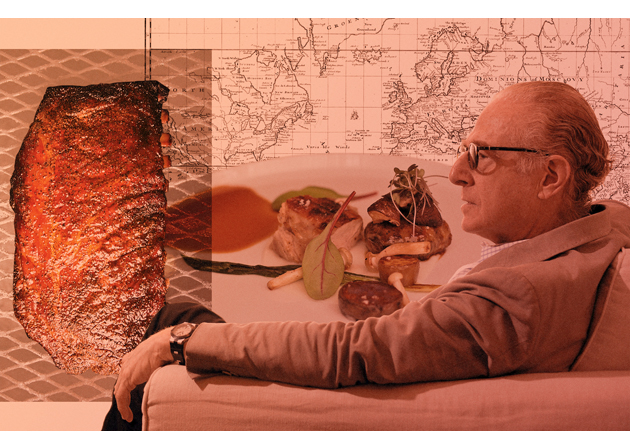 Live to eat or eat to live? Here, Jacob Richler takes a culinary trek for an insatiable bon vivant.

If Dr. Josh Josephson was contemplating the food heaped in front of him with something more than his customary combination of intense focus, rapacious curiosity and barely repressed anticipation, this had everything to do with circumstance.

It was just after 11 a.m. and, with little more than a fruit smoothie under his belt, Josephson was sizing up a butcher paper-lined plastic cafeteria tray loaded with a pound or so of thick sliced slow-smoked turkey breast, an entire rack of pork spareribs, a pair of smoked beef sausage links and three pounds of beef brisket – two fat, one lean.

“Gentlemen,” Josephson said, his voice surprisingly steady. “Shall we begin?”

The gentlemen in question were three distinguished members of Josephson’s travelling barbecue connoisseurs club: Anson Group Canada hedge fund manager Moez Kassam, a.k.a. Munchin Moez; Nota Bene restaurant chef-patron David Lee; and me. The venue was Franklin Barbecue in Austin, Texas, which, in 2013, the barbecue experts at Texas Monthly magazine anointed best in state. And the question was purely rhetorical.

We tucked in. The slow-cooked turkey was both supple and surprisingly succulent. The rib meat had nearly ideal texture and a textbook smoke ring but was a little too eager to surrender its bone. The sausage was packed with beef of a pleasingly coarse grind, and each bite unleashed rivulets of smoky rendered fat over the tongue.

And the brisket? The brisket was heavenly, its smokiness subtle but pervasive, the mouth feel an ideal balance of textured and yielding, with each and every morsel packing a sublime and addictive lacing of fat.

“The ribs are a touch over – but just a touch,” Josephson proclaimed. “The brisket I give 9, 9, 9 for the fat, and 9,9,8 for the lean. That’s using the Kansas City Barbecue Society scoring system, of course.”

Josephson picked that system up last year while being trained as a guest judge for the annual Jack Daniel’s World Championship Invitational in Lynchburg, Tenn.

So, on the off chance that you are not up to speed, be advised that KCBS competition scorecards rate appearance, taste and texture from 2 (inedible) to 9 (excellent) – because 1 means disqualification and a perfect 10 is unthinkable. So Franklin was looking pretty good. But then, competition was tight. Our barbecue odyssey had already covered Pecan Lodge in Dallas.

And still to come in Austin was John Mueller Meat Co. and Terry Black’s Barbecue; Smitty’s Market, Kreuz Market and Black’s Barbecue in Lockhart; and Snow’s BBQ in Lexington.

Josephson undertakes such trips and culinary pilgrimages with enviable frequency. Some are ostensibly for business – for as president and owner of Toronto’s Josephson Opticians chain and an internationally renowned specialist in the contact lens field, he has been known over the last four decades to travel as much as five months of the year, attending conferences and giving speeches in all cities where fine restaurants could be found.

Nowadays, though, travel is more likely to be entirely of a culinary nature.

For example, just a couple of months before the Texas barbecue tour, he enjoyed a nice jaunt to France. The ostensible draw was a quinquennial gathering of his friends in Beaune of the international chapters of la Confrérie des Chevaliers du Tastevins, a 12,000-member organisation of wine enthusiasts united by a love of Burgundy and the privilege of owning cellars much better than mine or yours.

“Of course, I wasn’t going to go all that way over there to do just one thing,” Josephson explained, unnecessarily.

So, first he spent a few days in Paris, checking up on some new restaurants in the news like Neige d’été in the 15e arrondissement (“the best dining experience I’ve had in a long time”). And after Beaune, Josephson and some old friends from the Toronto chapter of the Tastevin nipped over to Bordeaux for a quick pilgrimage to the incomparable Château d’Yquem.

From there, it was off to Landes – and Les Prés d’Eugénie, the venerable Michelin three-star by Michel Guérard, legendary creator of la cuisine minceur (“Minceur? Let me tell you – it was nothing but cream and butter!”). And from there – why not? – to neighbouring San Sebastián in Spain for a few days of pintxos and tapas and more Michelin stars. They stopped in on the three-starred Mar-tín Berasategui (“better than the first time!”) and Mugaritz (two stars – “disappointing – compared to the first time”) and Asador Etxebarri.

“That was even better than last time. It was incredible, really remarkable. We grazed on the whole menu – it all sounded so good.”

An old friend of Josephson’s told me once that this legendarily insatiable appetite of his – and his propensity for ordering and consuming every item on a good menu – dates all the way back to childhood. And, specifically, one particular seminal incident therein that sat with young Josephson particularly poorly. Confronted with this evidence, he concurred and elaborated.

“It was back in the ’50s. My mother took my brother and me to the Town Tavern – which at the time was the best place in the city for lobster,” Josephson recalled. “I was going to have that and I wanted to start with the shrimp cocktail, and my mother said, ‘No, you have to have one or the other.’ She just didn’t like spoiling me. But I was so upset about it and I never forgot it. From that point on, when I wanted something and I could afford it, I got it.”

Fortunately that quest for gratification came packaged with curiosity about what was the best and how to tell it from the rest. And in that, he dates his start to his first dining trip to Europe with a school friend in 1970.

“We went for a few weeks. We planned it all out months in advance. We went to Michelin three stars and two stars and occasionally one stars. It was great.”

But the trip also brought on the first serious setback of the gourmand life: 16 new pounds. “And I wasn’t too thin at the time to begin with,” he allows. This unpleasant truth revealed itself to him at the office (he worked as an optician then) shortly after his return. “I wore suits to work then. And I bent over to get something … and I split my pants.”

He tried dieting – but the sacrifices proved unavailing at the waistline. So in desperation he turned to exercise. Specifically jogging. And for the next 30 years that worked. At least, it kept the weight off. Now 71, he still works out for an hour and a half each day. Then last year came setback No. 2: a medical test that showed abnormally high atheriosclerotic plaque.

“The doctor suggested I go on the Esselstyn diet,” Josephson had told me at the time, speaking of a diet named for its chief proponent, the American surgeon and one-time Olympic rowing champion Caldwell Esselstyn. “Plant-based, no dairy, no fat. Nothing with a mother or a face.”

He had sounded distraught when he called me with the news. But whether he was really worried for his health and future or just devastated that he was going to miss our annual steak purveyors tasting dinner scheduled for Nota Bene the following week, I could not be sure.

In the end, Josephson showed up for that anyway – and while the rest of the gang feasted on 20 different cuts of steak, he ate a vegetarian tasting menu. A few months later, he was growing worrisomely gaunt. Then something intolerable happened: in the run-up to a friend’s keenly anticipated wine dinner, he phoned ahead to insist upon a vegetarian dinner – and was promptly disinvited.

This time, “no” set him instead firmly back on a logical path: the quest for a second and more reasonable medical opinion. Promptly, a new doctor told him what he needed to hear.

“Just be moderate, Josh,” he said. “Don’t have five main courses and three desserts anymore. Be a good boy most of the time. Live and enjoy – and what happens happens.”

So perhaps in that context what happened in Texas should have stayed in Texas.

But then, Josephson himself put it up on his blog on the website for the Cookbook Store, which he founded and owned for decades before shutting it down last year for want of a new lease. Look there, and you’ll see the facts: eight barbecue joints in three days. At least, we only ate brisket at lunch (dinner was just fine dining and tasting menus).