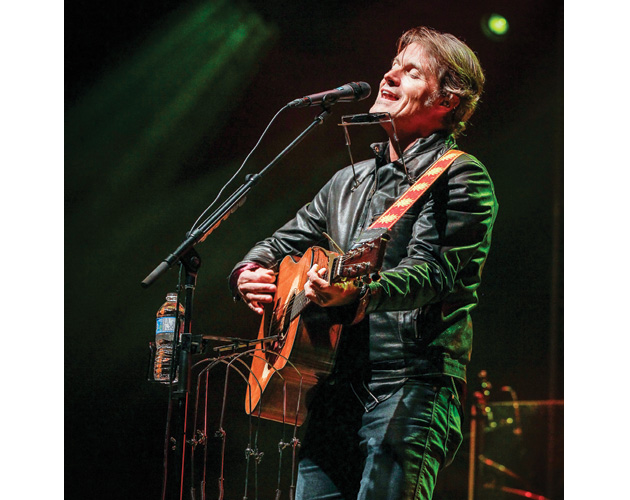 Jim Cuddy, lead singer and guitarist of the Canadian band Blue Rodeo, didn’t grow up in a wine-drinking family. In fact, his first alcoholic drink of choice was beer. “When you start playing in bars, you get paid in beer,” he says. “At first, I was excited: free beer! But after five years, I couldn’t take any more beer. That’s when I got into wine.” And into it he is. Cuddy has partnered with Niagara’s Tawse Winery to create a new wine brand, Cuddy by Tawse.

“Moray and Joanne Tawse are friends,” Cuddy says. “I had played at their winery several times, their wines are top-notch and I like their biodynamic approach.”

Cuddy didn’t just lend his name to the new wine; he was involved in making it. “I thought it would be easy: just select the best grapes, blend them together and you’re done,” he says. “But it’s much more nuanced. Paul Pender [Tawse’s winemaker] showed me that one block of grapes can overwhelm another. Blending is about creating a harmonious experience.” Was he concerned about the bad rap that celebrity wines get? “You answer that concern with what’s in the bottle. I think we’ve done that.”

Cuddy’s wine education happened on the road. In 1991, he and the band’s road manager Kevin Douglas bought several wine magazines and single bottles of first-growth Bordeaux at $50 a bottle. Today, those wines sell for more than $500 a bottle. “We’d read up on the wines on the tour bus, then in the next town where we were playing, we’d go into the liquor store and buy the wine,” Cuddy says. “We’d take it to the back of the bus and pour it into plastic cups.”

That’s a far cry from his encounter with Geddy Lee of the rock band Rush, at Toronto’s Splendido restaurant. “I was celebrating my birthday so I took my best wines to the restaurant,” Cuddy says. “The staff lined them up along the counter, but down a bit, I could see a line of the finest vintage Burgundy and Bordeaux wines. I asked, ‘Who the hell is here?’ When I found out, I went over to Geddy’s table and we shared some great wine that night.”

Best wine advice New York wine expert Tom Eagan told Cuddy not to rate the wine, but rather appreciate its unique merits. “I prefer to understand a wine through its culture and food,” says Cuddy, “to focus on the experience of wine, rather than the price tag. When I was in Sicily, the wine was served at room temperature—30 C—with salty, oily fish. Then it all made sense how wine and food from a certain place go together.

The power of the grape Cuddy likes what happens when people share a bottle of wine. “They talk, loosen up and enjoy each other’s company.” And if he could share a bottle with anyone, who would it be? “Paul McCartney, but he’d probably want a joint,” Cuddy laughs. “I’d also like to share a bottle with Tom Waits, Leonard Cohen and Kris Kristofferson, not because they know wine but because they’re great musicians I admire.”

A true vintage Cuddy believes that music, like wine, gets better with age and thinks his own craft as a musician has evolved over time. He’s more open with his lyrics, adding: “Music is one art where they don’t kick you out when you get old.”

Natalie MacLean is the editor of Canada’s largest wine review site at www.nataliemaclean.com.

Jim Cuddy’s pairings
“Play the sad songs with my red wine, and the happy ones, like Kris Kristofferson’s ‘Me and Bobby McGee,’ with the white.”