Is Champagne The Most Versatile Drink Ever? 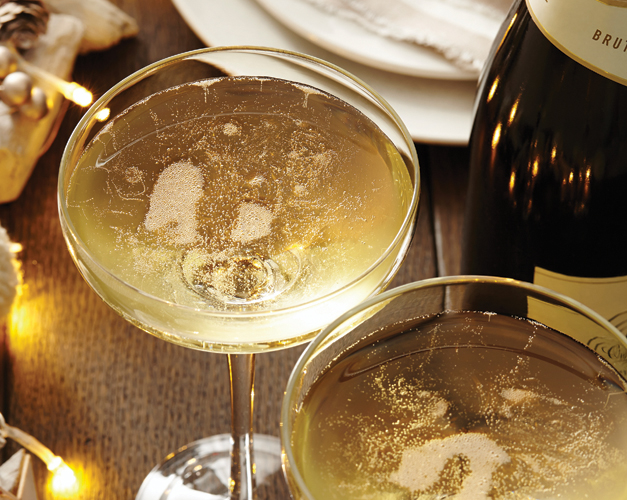 Bubbles add a certain je ne sais quoi to any occasion and are much more versatile with food than you might think. Luckily, there are bottles for every budget and every possible food pairing.

Let’s get one thing straight. Champagne is a region of France where they grow the grapes that are used to create the iconic juice. This is the only place on earth that can truly call its bubblies Champagne. Everywhere else, you’ve got cava (Spain), Prosecco (also a name of a place, in Italy) and sparkling wine (Canada, California, Australia)…you get the picture.

But it’s not just the grape, it’s the process. For example, “Prosecco doesn’t go through secondary fermentation [directly] in the bottle (the process of getting bubbles into the wine), as is done with Champagne,” says Erin Henderson, sommelier and owner of The Wine Sisters, and a spokesperson for Ruffino, a new Prosecco launched in October 2016. What it does go through, she adds, is the Charmat method, where secondary fermentation happens in large tanks, a less expensive process than the exclusivity of Champagne’s grapes and the individual treatment of each bottle.

Let’s get back to France—and those pairings. Benoît Gouez, chef de cave of Moët & Chandon, was in Toronto earlier this year to introduce MCIII, their new multi-vintage Champagne, wherein the wine matured using the “elements,” so to speak, of metal (stainless steel), wood (oak casks) and glass (the bottles). This combination gives the bubbles a little bit more complexity, adding a bolder flavour to the wine. I’ve also noted many chefs looking at entertaining ideas with food pairings of sparkling wines and Champagnes, rather than straight wines. Gouez confirmed my trends-spotting nose.

“Even if most Champagnes are designed to be enjoyed as an aperitif or a party drink,” he says, “some Champagnes, like vintages or prestige cuvées, have the complexity and the maturity to be paired with serious food.” Gouez and Moët & Chandon have taken this idea to the culinary experts. The House has two chefs dedicated to creating dishes that pair with their Champagnes. “And we have a partnership with three-starred Michelin chef Yannik Alléno,” he adds. So it’s not just cheese, I think. “For MCIII, Alléno developed three dishes as a match: red mullet; shiokoji chicken and ginger; and slow-cooked shoulder of lamb.” A note for the budget-conscious: any bold sparkling wine would hold up well with these food picks.

Back in the day, Ernest Hemingway and his contemporaries would take their tipple at the Waldorf Astoria Bar in New York City, where Oscar Tschirky, maître d’ extraordinaire, a.k.a. Oscar of the Waldorf, and cookbook author credited with creating the Waldorf Salad, held court. Pairings in this era, it seemed, leaned more toward “What other alcohol can I mix into my favourite booze?” Earlier this year, The Waldorf Astoria Bar Book, by Frank Caiafa, was published, and within its pages Hemingway’s take on the classic champagne cocktail he called Death in the Afternoon. Interestingly, it contains absinthe, a spirit that’s seeing a renaissance.

Closer to home, Niagara’s Jackson Triggs Winery chef Tim MacKiddie has his own take on pairings. For the red wine lover, there’s a sparkling merlot, which pairs well with game or beef. But when it comes right down to it, MacKiddie’s all about the decadence. “Sparkling wine and chocolate are the ultimate pairing,” he says. “The creamy texture of milk chocolate combines elegantly with the fruity, zesty notes of [a wine like] Jackson-Triggs Grand Reserve Entourage Sparkling Brut.” Of course, we couldn’t let MacKiddie away without sharing his favourite chocolate recipe with you on the following page.

For me, however, it’s the salty flavours that add the zing to my favourite bubbles. I like popcorn, I tell Gouez, imagining he’ll think me gauche. “Popcorn, yes! But salted rather than sugared,” he agrees. “Champagne naturally has four of the five primary tastes [sweet, sour, salty, bitter, umami]. Only saltiness is missing. I believe some salt is needed to fine-tune a pairing with Champagne. There is no surprise that the most classic pairings with Champagne—oysters, caviar, Parmigiano Reggiano cheese—are all salted!” Consider this my grain of salt.