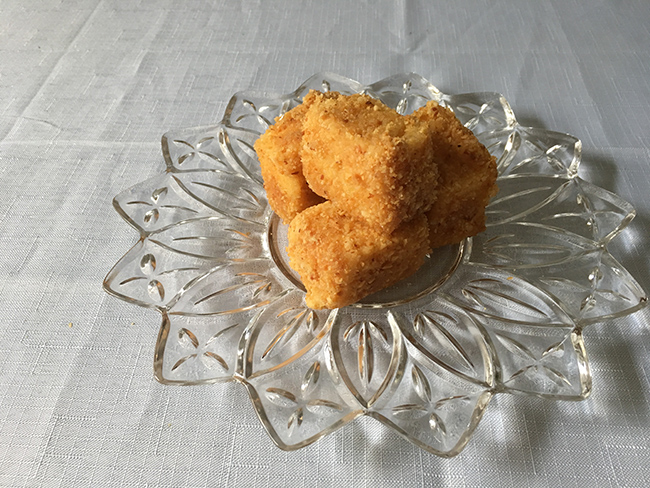 Family recipes are so much more than the sum of their ingredients. Travelling from one generation to the next, they carry with them traditions and memories that are unique to a particular family. That’s why we’ve decided to unearth as many as we can with “A Taste of Home,” a series of stories that allow people to share their family recipes and the stories behind them that make them so special.

For the first story in our “A Taste of Home” series, Zoomer editor, Tara Losinski reveals the secret behind Gram’s Mocha Cakes, a festive dessert that’s been enjoyed by five generations.

I heard the praises of Mocha Cakes before I had the pleasure of meeting the person responsible for them. The cakes are cookies — ones that have a cult-like devotion among my partner’s family. And the person of credit is Pauline Lewis, my grandmother-in-law.

Gram has been baking batches of these family favourites for as long as my partner Kirk can remember. I chatted with her earlier this year as she readied for the drive to her overwinter spot in Florida. “All my life I had it. I had them as a child,” she replied to the question of just how long she’d had the recipe.

Growing up in New Brunswick, her mother, Great-Grammy (Geraldine Colpitts) made them for her (and her seven siblings). Five generations on, they’re still a holiday staple for the family — including in-laws like me. And to this day, Gram sources a key ingredient from G.E. Barbours, back in N.B.

In 1996, I followed my partner, as one does, to Toronto. We formed a family unit, which entitled us to our very own share of Gram’s Christmas cookies. Every year, she fills tins with Mocha Cakes (and Shortbread and Chocolate Peanut Butter Balls) On each tin, a piece of painters tape with the name of a kid or grandkid lucky enough to live in close proximity — perhaps a part of the reason Kirk moved back to Southern Ontario after being transplanted for a stretch in my native Newfoundland.

Once the grandparents put Toronto in their rearview for Florida each year, it was open season on the basement freezer that kept these treasured treats fresh. To put off pick-up too long leaves your stash in peril of being pilfered (ahem, Uncle Pete).

I was pretty excited to try my first M.C. I’m a chocolate lover. And, hey, mix it with the flavour of coffee and work it into a cake-like cookie/square/bar … I was pre-sold!

Upon first glance of my inaugural Mocha Cake I thought, “Maybe the mocha is inside.”

Upon first bite of my inaugural Mocha Cake I thought, “Cake-like? Yes. Mocha? No. And peanuts … unexpected.”

Additional bites failed to reveal any mocha at all.

And as for the recipe, well, it’s all by heart. Gram, now 87, has been making them for six or so decades after all.

“Well, you need a good pound cake. Sara Lee has a good one but I haven’t seen it up here in years.” (Sara Lee highers up, take note.)

If one is inclined, make your own pound cake. Both my partner and his Aunt Karen, Gram’s middle child, have contributed from-scratch ones over the years. And speaking of contribution, before our dearest Gramp (Karl Lewis) passed two years ago, he could be counted on for cookie duty. We’ve also had also had the help of Aunt Sue — oft referred to as our Martha Stewart — Gram’s daughter-in-law (and wife of the infamous Uncle Pete) to thank for our bounty.

“And then you need peanuts, really fine. Unsalted. You can crush them yourself but it’s an awful lot of work. I get them from Down East and I freeze them.”

In fact, Gram exclusively uses peanuts from Barbours, a New Brunswick food purveyor also celebrating its sesquicentennial (150th) this year. The company’s ‘Fine Peanut Pieces,’ in what looks like a soup can, are packed away in luggage for transport back to Toronto on her, or other family members’ visits.

“You mix milk and water and icing sugar,” she says of the syrup used to coat the squares.

In consultation with my mother-in-law Carol, who keeps the family tradition alive in Calgary, the water has to be warm. And she doesn’t use milk but starts with a cup of icing sugar, includes half a teaspoon of vanilla and then adds enough water to make a thin paste. My father-in-law, and Gram’s eldest, Greg pipes in to say that he’d like to try adding Maraschino cherry juice to give them a little something extra. But we are digressing.

One by one, each square is dipped in the sweet paste, letting any excess drip off, and then coated in nuts on all sides and placed on parchment to set. And voila, Mocha Cakes.

After a quick Google, I come across a story from another woman introduced to these beloved New Brunswick Christmas staples, also by way of romance. But she refers to them as Moco Cakes — not that this name is in any way a better descriptor.

These days Gram simply names the tins for their contents: Mocha, Shortbread and Choc Balls. Each household (eight or so depending on who’s in town), allowed one of each. The ‘Mocha’ tins, most prized. And my partner is perhaps the luckiest of the lineage as he has our share all to himself.

No disrespect to Gram’s efforts and generosity but … I don’t like Mocha Cakes.

But paws off my Shortbread and Choc Balls.