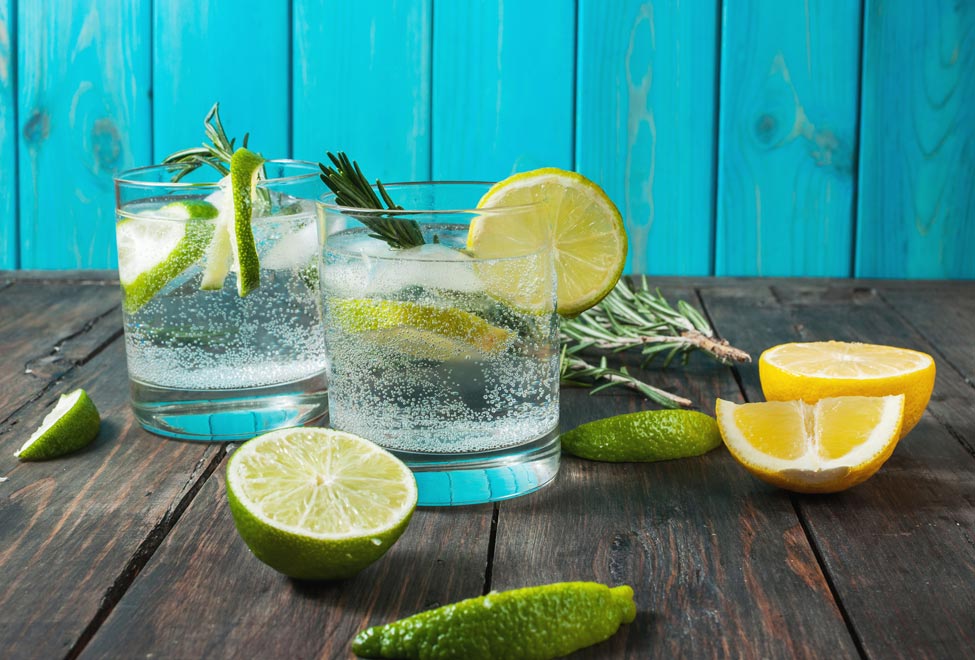 Soldiers of the BritishmEast India Company first mixed gin with tonic water (containing the antimalarial quinine from bark of the cinchona tree) in the early 19th century, primarily to fend off malaria. In 1870, the Schweppes Company, the same manufacturer producing tonic today, brought its Indian Quinine Tonic to market.

One could also point to the longevity of the G&T drinker. The Queen Mother who died in 2002 at the age of 101 has been reported to be an enthusiastic consumer of them. In Backstairs Billy: The Life of William Tallon, the Queen Mother’s Most Devoted Servant, biographer and journalist Tom Quinn claims the reason the Queen Mother loved her steward, Tallon, so much was because he knew how to make gin and tonics the way she liked them.

Others close to the Royal Family, however, say the Queen Mum’s preferred drink was gin and Dubonnet. Dubonnet is a blend of fortified wine with herbs and spices, including a small amount of quinine. Perhaps that explains the confusion. I did a Google search and found a fair number of centenarians who attributed their longevity to their daily tipple of gin and tonic. As far as I know, however, there are no scientific studies that prove it.

While the G&T seems a simple two-ingredient highball, today there are a multitude of variations and ways to “perfect” the drink. In his 2014 book The Spirit of Gin: A Stirring Miscellany of the New Gin Revival, Matt Teacher writes about the London Gin Club in England: “Members can rejoice at the large selection of garnishes that have been specifically paired with each of the gins. The variables one has to choose from when selecting the perfect combination include the gin label, the brand of tonic, the accoutrements or garnishes, the form of ice and sometimes the addition of other flavours such as bitters.”

Toronto’s Nota Bene restaurant has a special G&T menu that enables customers to build their own by selecting first from the rotating choice of a dozen or so gins, then picking a tonic and the type of ice from the list. Two of my favourites were Botanist Islay Day Gin on cubed ice with the house tonic, garnished with lime wheels, cardamom and rosemary, and Dillon’s Unfiltered Gin 22 on a single large cube of ice with Fever-Tree tonic garnished with lemongrass, cucumber and dried hibiscus flowers.

Nota Bene’s owner-chef David Lee was inspired to do a G&T bar after his travels to Spain. On a recent trip to that country, I, too, noticed gin-tonic bars were all the rage and have been told that gin tônica is practically Spain’s national cocktail. Matt Goulding in a blog post at time.com wrote about Spain’s obsession with gin and tonics.

“When I tell people that Spain is the best place in the world to drink a gin tonic, a drink created by the British army in India as a defence system against malaria, I’m invariably met with skepticism … But ‘gin tonics’ (in Spain, they use the English name, but drop the ‘and’ so that it comes out cleaner) have captured the attention of Spain’s chefs, bartenders and alcoholics alike,” he wrote.

Apparently, the country is now the world’s biggest gin consumer per capita, with demand increasing at an average of 18 per cent over the past five years. I’ve not found anyone who can say why a niche taste became a mainstream mania in Spain, except perhaps that it suits the climate and Mediterranean lifestyle of the country.

The Doce’s Gin Club in Valencia, which started in 2009 with 112 varieties of gin, was recognized by Guinness World Records for having the “most varieties of gin commercially available” in the world when the bar officially stocked 429 varieties of gin – since grown to 520. Bar manager Javier Borja has said the secret to a perfect gin and tonic is pouring the gin from a height to trap oxygen and then pouring the tonic over a spoon to preserve the bubbles.

The gin-tonic bar I went to in the historic centre of Aranda de Duero, north of Madrid, matched brands of gin with different flavours of Schweppes tonic such as pink peppercorn, orange blossom and lavender, and cardamom and ginger. I haven’t seen that range of Schweppes tonics in Canada yet, but there are a growing number of artisanal tonics available both made here and abroad.

Fever-Tree Indian Tonic Water from the U.K. is a great brand that blends natural botanical and quinine flavours. Q Tonic from New York’s Q Drinks claims quinine from the Peruvian Andes. In the Atwater market in Montreal, I found Jack’s Tonique, an artisan tonic water concentrate that’s made in Gatineau from cinchona bark (the source of quinine), honey instead of sugar, fresh lemongrass, Sicilian lemon juice, ginger and lavender.

Mathieu Guillemette and Joël Beaupré launched Jack’s Tonique in the spring of 2014. They say their tonic goes particularly well with Tanqueray, Dillon’s gin from Niagara, North of 7 gin from Ottawa and Piger Henricus gin from Quebec. You can find stores that carry Jack’s via their Facebook page HERE.

This brings us to the question of what gin to use in a G&T. Beyond the obvious – a.k.a. your favourite – I’d say switch around depending upon what flavours you’re in the mood for. More and more delightful gins are being made by artisan producers in Canada.

Ungava made by Domaine Pinnacle in Quebec is flavoured with indigenous Canadian botanicals of our far north such as Nordic juniper, Labrador tea leaf, crowberry, cloudberry and wild rose hips. It’s very aromatic with a juniper nose, smooth silky palate and layers of flavours that slowly reveal.

Alberta’s aromatic and well-spiced Parlour Gin from Eau Claire distillery has the traditional juniper notes along with hints of rosehip, Saskatoon berry, mint, coriander and citrus that finish with cinnamon and ginger spice.

Victoria Gin, hand-produced by Victoria Spirits on Vancouver Island and distilled from 10 wild botanicals, is packed with personality. Citrus peels come through on the nose as well as gentle juniper along with floral notes from rose petals. With Vancouver’s triple distilled Yaletown Gin (by the Yaletown Distilling Company), juniper and coriander jump forward in the bouquet, and on the palate there’s a whisper of sweet licorice root, spice and pepper with a distinct bitter almond finish.

Regarding glassware, bartenders are increasingly recommending serving G&T in a balloon-shaped glass with plenty of ice and a garnish tailored to the flavours of the gin to best enhance the experience. (The balloon shape gathers the aromas of the drink at its opening.)

Good taste alone has replaced the medicinal reason for a G&T, and that works for us. Place cracked or cubed ice in a highball glass. Combine gin and tonic water. Stir and garnish with the citrus wedge.

Combine Tonique and gin with ice. Top with sparkling water and lemon slice.

Celery Gin Tonic
(This recipe from Piger Henricus is a refreshing “tonic” without the bubbles.)

Muddle celery with sweetener and lemon juice for one minute in a blender. Add gin. Pour in a cocktail shaker filled with ice and shake until the outside of the shaker becomes frosted (about 30 seconds). Strain into a rocks glass filled with ice. Garnish with parsnip and lemon twist.