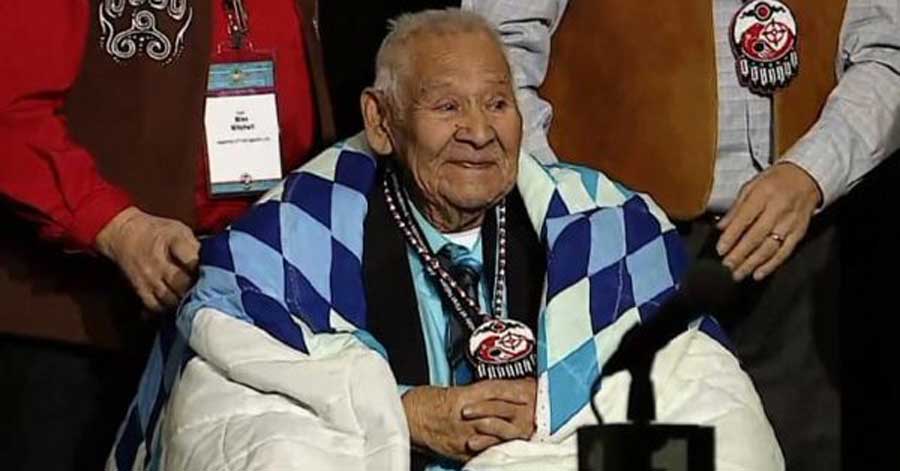 The Mohawk language was one of 33 Indigenous languages used in battle to ensure enemy forces were unable to decode messages sent between Allied forces.

Oakes first enlisted in the United States Army at 18 and served for six years as a technician 4th grade with Company B’s 442nd Signal Battalion. He along with 17 other Mohawks from Akwesansne — a reserve that straddles the Canada-U.S and Quebec-Ontario borders — were trained as code talkers while stationed in Louisiana.

Oakes served as code talker in the South Pacific, New Guinea, and Philippines. In 1946,  he received an honourable discharge and was awarded the Silver Star Medal, the third-highest military decoration given in the U.S. for showing gallantry in action against an enemy.

Last December, Oakes was honoured at an Assembly of First Nations (AFN) in Ottawa, where he was given a star blanket and beaded medallion by AFN National Chief Perry Bellegarde.

“When you wrap a star quilt around anyone, you’re forever surrounded by your relatives, the star people in the heavens, and we’ve done that for Levi,” said Bellegarde during the assembly. “It’s a small gift to say thank you.”

At the time Oakes responded with a “”Niawen’kó:wa ki’ wáhi,” which in his native tongue Kanien’kéha, translates to ‘Great thanks, indeed.’

That same day, Oakes was also honoured at the house of commons and met with Prime Minister Justin Trudeau.

After an introduction from Speaker Geoff Regan, MPs in attendance at the House of Commons gave Oakes a standing ovation.

“Renowned for having the only unbroken military code in history, the code talkers including Mr. Oaks provided an invaluable contribution to the Allied war effort,” Regan said in his introduction of the veteran.

Oakes greeted the ovation with a thumbs up as he watched on.

“He’s an example of someone who laid it all on the line and used his language to ensure that we all live in peace and ensured Allied victory,” Marc Miller, parliamentary secretary to the minister of Crown-Indigenous Relations, told CBC News.

“If you compare to our American allies they seem to do a much better symbolic job of acknowledging them. The use of code talking during the war saved lives and a shared Allied victory. For me, that’s super important.”