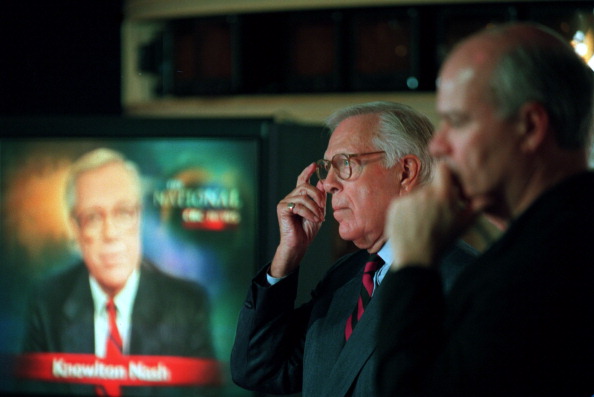 Veteran CBC broadcaster, Knowlton Nash, died on Saturday at the age of 86. The newscaster battled Parkinson’s disease for several years reports The CBC.

In April, 1988, he walked away from the program, passing the baton to Peter Mansbridge, who at the time was a national orrespondent for CBC-TV.

Mansbridge had reportedly been offered a $1-million salary to co-anchor a morning show on the U.S. network CBS. But he agreed to stay over a late-night cup of hot chocolate after Nash volunteered to move to The National’s weekend desk.

Had the privilege of working many times with Knowlton Nash. The integrity, intelligence and kindness we aspire to. Thinking of you. #cbc

Arlene and I mourn the passing of Knowlton Nash, who was a friend and mentor over many years. Much love to Lorraine and family.

On Sunday, the CBC issued the following statement:

The broadcasting world has lost a giant and the CBC has lost one of its most esteemed and admired colleagues.  Knowlton Nash passed away last night at the age of 86.  He was a pioneer in the industry who inspired a generation of journalists to aspire to the high standards he set for himself.

CBC’s Chief Correspondent Peter Mansbridge followed in Nash’s footsteps, assuming the anchor role for The National back in 1992.

“Knowlton was unquestionably a giant of Canadian journalism but he was so much more to so many.  To his colleagues he was a true friend and a valued mentor, and to Canadians he was family – he was their “Uncle” Knowlton”.  He did it all — a correspondent through a turbulent decade of the sixties, a manager as television news came of age, and an anchor when the CBC launched its flagship hour. He made all of us proud to be a part of his team,” said Mansbridge.

Heather Conway, CBC’s Executive Vice-President for English Services added, “While I never knew Knowlton personally, Iike most Canadians, I certainly knew him as the anchor of The National.  He had a remarkable career and we are deeply indebted for the contributions he made to CBC and the industry at large; what a legacy he leaves behind.  On behalf of the entire CBC family, I extend our deepest sympathies to Knowlton’s family for their loss.”