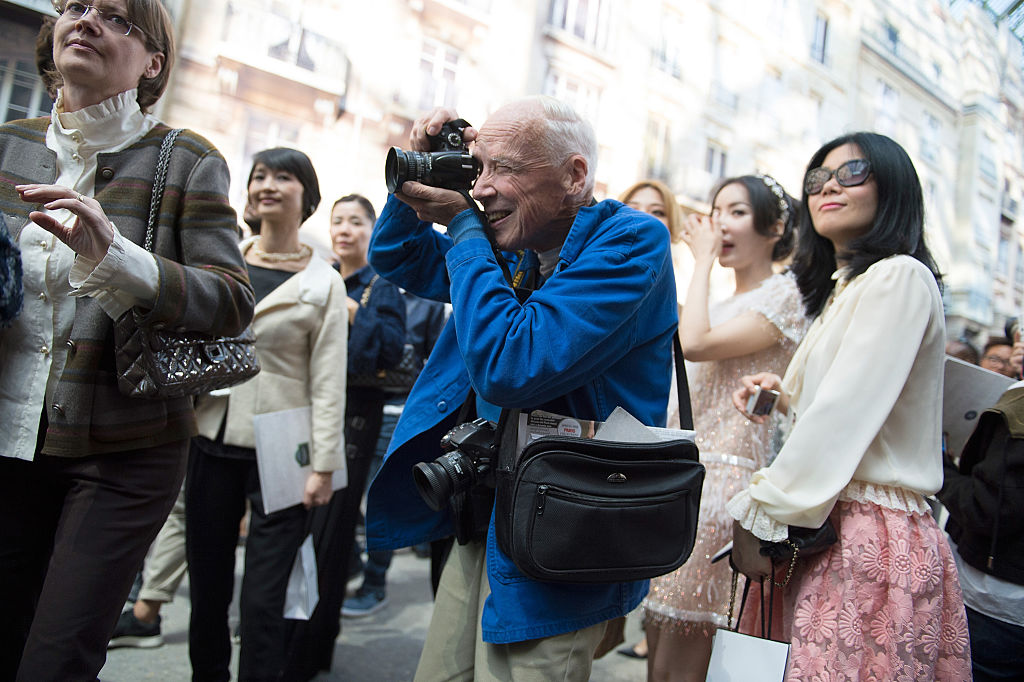 Bill Cunningham, the legendary fashion photographer who spent almost four decades capturing the fashionistas of New York and what they wore, which he featured in his popular columns in the style pages of The New York Times, died on Saturday at age 87.

Before the legions of young photographers who now cultivate a living snapping photos of stylish people on the street and posting it to blogs and magazine pages, Mr. Cunningham – and it only seems appropriate to address him as such for he was the most gracious of gentlemen – was widely considered the original street style photographer.

During fashion weeks in New York, which is now overrun with a grotesque amount of photographers jockeying to snap the creme de la creme of the fashion cognoscenti outside of show venues, Mr. Cunningham would show up on his bicycle wearing his uniform – a blue French workman’s jacket and khaki trousers – and take his place amongst the young shutterbugs.

Beloved, treasured and widely admired for this unerring eye, profound professionalism and high journalistic standards, not only by some of the most powerful players in the fashion industry but also by New York society swans and avid readers of the style pages. To be photographed by Bill Cunningham, who would stealthily and unobtrusively snap his photos, was considered an esteemed honour for individuals who made it into his column. Even fashion’s high priestess, Vogue magazine’s editor-in-chief, Anna Wintour, once said, “We all get dressed for Bill.”

His knowledge of fashion was encyclopaedic and his work was viewed as part historian and part anthropological. He was such a fixture in Manhattan and a fashion institution, Bergdorf Goodman once dedicated their display windows to his work and threw a lavish party in the store for him.

He not only photographed fashion gurus and society doyennes at swanky galas but saw style in subjects as varied as drag queens to club kids to Harlem church ladies in their Sunday best.

Yet, Mr. Cunningham, true to his high journalistic ethics, remained practically an outsider in the glamourous circle he roved in and around. He didn’t hobnob with his subjects, preferring to observe and chronicle.

But in 2010, the cameras were turned on him with a documentary film, Bill Cunningham New York. The critically acclaimed film showed just how little people knew of his personal life – he lived in a modest apartment above Carnegie Hall, he slept on a cot, his arcane filing system of his negatives were stored in metal cabinets and he would reserve his room at a small hotel in Paris for fashion week by just mailing them a postcard with his dates. An incredibly touching moment in the film was when he was asked on camera about his love life. Growing teary eyed, Mr. Cunningham never acknowledged whether he was gay or straight but viewers got the impression there was perhaps once a great love in his life, which remained a mystery.

Mr. Cunningham, truly loved his job and was working right up to the days before the stroke which hospitalized him before he passed away.

And the fashion world and the streets of New York will seem less joyous with the passing of the gentleman whose work will forever seem like a love letter to the industry and city he passionately loved.