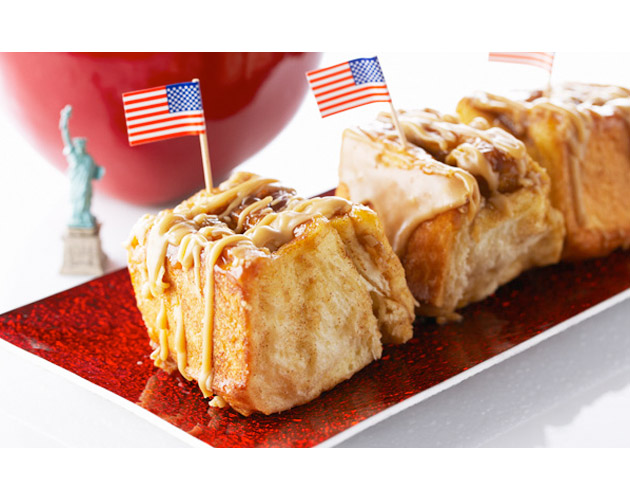 Take a bigger bite out of life! Every day is a holiday with BiteMeMore.com.

We salute the U.S of A. today, Patriot Day, with these drool-inducing sticky apple cinnamon buns. Filled with sweet cinnamon apples and syrupy brown sugar, the tender buns are topped with a creamy caramel icing.

1) For the dough, pour milk in the bowl of an electric mixer, sprinkle yeast over top and let sit 10 minutes, until foamy. Add sugar, eggs, flour and salt. Using the dough hook attachment, mix on low speed to combine. Turn mixer to medium-high, add butter and continue for 5 minutes, until the dough is smooth and pulls away from the sides of the bowl. Shape the dough into a ball and place in a large buttered bowl. Cover the bowl with plastic wrap and let rise in a warm place until doubled in volume, about 1½ hours.

2) For the apple filling, in a medium saucepan, melt butter over medium-high heat. Stir in apples, sugar, flour and cinnamon. Reduce heat to low and stir continuously for 3-5 minutes, until thickened. Remove from heat and let cool.

3) To assemble the buns, coat a 13×9-inch baking dish with non-stick cooking spray. After the dough has risen, punch it down and turn out onto a lightly floured surface. Roll dough out into a 12×18-inch rectangle. Spread 3 tbsp of softened butter onto the dough. Mix together ¾ cup brown sugar and 1 tbsp cinnamon sprinkle evenly over butter. Spread cooled apple filling over top. Starting with the long side, roll dough into a cylinder. Cut into 12 equal pieces and place them in prepared baking dish. Don’t worry if some of the apple filling comes out – you can use a spatula to scrape it up and place it on top of the rolls. Cover with plastic wrap and let rise in a warm area for 1 hour.

5) For the caramel icing, in a medium saucepan, melt butter over medium heat. Add cream and brown sugar, stirring until it boils. Remove from heat and whisk in ½ cup icing sugar. Cool for 5 minutes. Whisk in vanilla and remaining ½ cup icing sugar. Immediately pour over apple cinnamon rolls while they’re still warm.

Raise a glass to the Big Apple with this Apple Butterscotch Martini.

Whether it’s cruising the aisles at the Dollar Store or experimenting at the stove, we believe that every day can be a holiday.