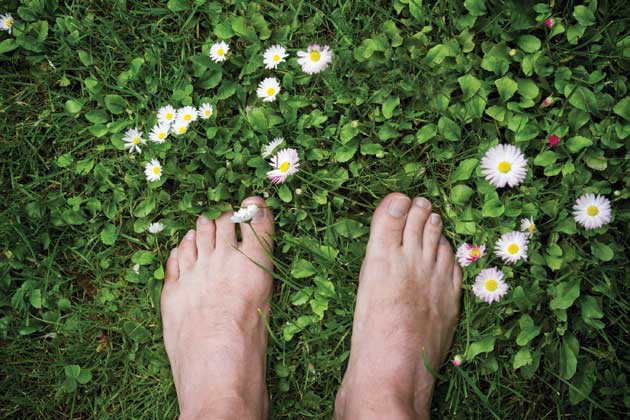 COMFORT IS OFTEN viewed as the ugly stepsister in the world of shoes. Some of the most celebrated shoe designers seem hell-bent on creating fantastically beautiful shoes that are little more than works of art for the feet.  These Cinderella-worthy beauties show little regard for the wearer performing seemingly mundane activities like walking.

And when you think of the other spectrum of the market – comfortable shoes – as practical as they may be, they hardly elicit the swoons their sexy stiletto sisters do.

But one shoe brand, the Copen-hagen-based Ecco, not only puts a high priority on the comfort factor, its shoes also tread lightly along the fashion trail. While not overtly trendy, they meld the elements of functionality, style and minimalism. Not surprisingly, this Danish company – like many of their contemporaries – Georg Jensen, Bang and Olufsen and Lego – follows the famed ethos of Scandinavian design: form follows function and function follows form.

No wonder one of their mantras is “We believe comfort is freeing people to move.”

Celebrating its 50th anniversary this year, Ecco is one of the few brands that offer shoes for an entire generation – from kids to grandparents. The vertically integrated company controls the many varied stages of the shoemaking process – from the leather to the finished shoe. Such is its vast resource of premium leathers, it provides the material to some of the more famous luxury houses in Europe.

And in the spirit of community, it also hosts the annual Walk In Style award, a charity gala that raises awareness of women’s issues around the world while also being one of the largest fashion shows to feature shoes.

But yet, despite the size of the company (the shoes are available in more than 90 countries), it still flies under the fashion radar, hardly touting its achievements.

“It’s like how David Bowie just released his new album this year,” she says, referring to how the legendary artist quietly released his first album in 10 years without fanfare and without any notice to the media.

Sometimes, you not only just have to let the product speak for itself but you just have to let people discover it.
And that’s the thing about comfort – it might not be flash and dazzle but it is quietly reassuring and, well, comfortable.  -Derick Chetty

Pop stars and hip-hoppers may be sporting their yellow Timberlands as au courant footwear, but boomers and beyond have been wearing these boots for 40 years. (Fun fact: the company wasn’t always called Timberland. It was the yellow boot’s moniker that prompted creator Sidney Swartz to later change the name of his entire enterprise.)

Inspired by the anti-fatigue mats that employees at the Harley-Davidson factory stand on all day, Timberland recently introduced its inverted cone system foot bed technology. The company describes the innovation as a system that returns energy in key pressure zones to enhance shock absorption and reduce fatigue. The men’s Abington Quarryville, above, was inspired by Scotsmen – note the kiltie tongue detail – working the granite quarries in Vermont. Abington, by the way, just happens to be the original name of the company. Suitable for orthopedics, $210, Timberland, Little Burgundy across Canada, www.timberland.com

Bogs Summits are as comfy as your favourite sweats but are engineered 100 per cent waterproof, insulated with Neo-Tech to -10 C, the EVA insole features DuraFresh anti-odour protection and the rubber outsole is moulded for comfort and support. But there’s more. The supple fabric can be folded down for a different look, and this new offering from the 11-year-old brand is machine-washable, too. In six colours, including heather grey, shown here, $110, www.bogsfootwear.ca  -Vivian Vassos

NEXT: PUMP IT UP

Ron White’s All Day Heels are like the Holy Grail of pumps: a shoe that is fashionable and comfortable (no wonder Laureen Harper wears these at official events). The 44-year-old entrepreneur behind the Ron White shoe shops is celebrating his 20th anniversary. He created his All Day footwear by utilizing components and materials from the orthopedic world but putting a stylish spin on it.

Materials like poron – an ultra light material that is filled with air bubbles, which NASA uses in its space shuttles – are used to cushion midsoles and is just one of eight different processes that go into ensuring his footwear is comfortable. Customers were so enthralled with his first design – tailored pumps –  they asked for more options. Hence, he now has a full range of styles from riding boots to evening shoes featuring this technology.

“This is the cashmere for your feet,” he says. – Derick Chetty