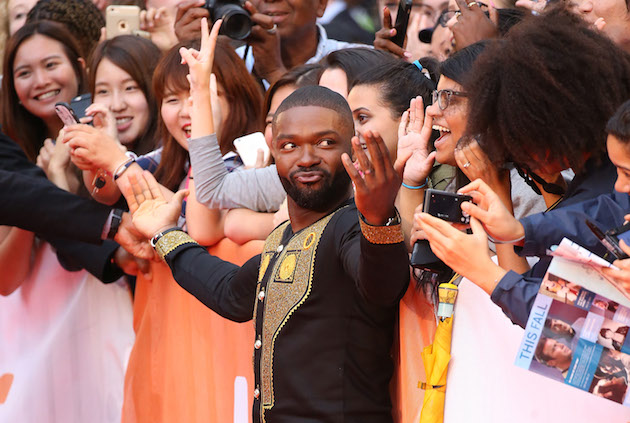 Yeah, I am the King of the Red Carpet. Actor David Oyelowo takes charge and poses for the legions of screaming girls on hand to get a selfie and an autograph. This is Oyelowo’s second premiere at TIFF, he also appears in A United Kingdom, where he does play a Prince.

At the premiere of Queen of Katwe, based on the true story of an impoverished Ugandan girl whose passion for chess drives her to become an international champion, Oscar winner Lupito Nyong’o and David Oyelowo looked positively gorgeous. Is now the time to start a rumour of a romance?

Wearing a glamorous and embellished African head wrap and the perfect shade of red lipstick, Lupito Nyong’o proves once again that she’s a fashion star as well as a movie star.

We’ve been dissecting male movie star facial hair all weekend – but we think David Oyelowo’s sculpted beard and precision cut hairline should be awarded “best in show.” But it’s still only day four…

A perennial classic, Sigourney Weaver, 66, in town for the premiere of her film, A Monster Calls, goes for understated glam in terms of hair and make up.

Bosom buddies and co-stars Rooney Mara and Nicole Kidman pose on the red carpet at the premiere of their film Lion.  Both ladies opted for slick hair, precision black eyeliner and a nude lip. Mara appears to be dreaming of the six-inch stilettos she mistakenly left at home.