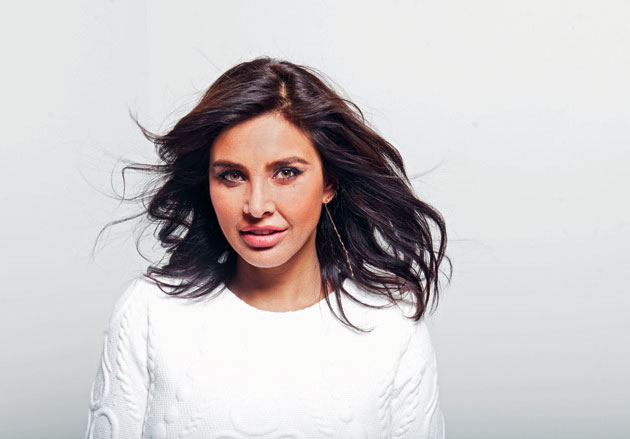 Canadian actress and cancer survivor Lisa Ray launches her own fragrance and it takes us on a passage to India.

We are seated on a silken sofa in the Platinum Suite of The Room, the designer hub for fashion at Hudson’s Bay Queen Street in Toronto. Ray, 44, is excited to discuss her first fragrance, Lisa Ray Jasmine of India, available at Hudson’s Bay stores and online at the7virtues.com. It’s a project that is literally close to home as these days she splits her time between Hong Kong and Mumbai. “What’s beautiful about the jasmine flower in India is it’s threaded into everyday life. It hangs outside temples, and women put it into their hair.”

She describes a typical experience of being stuck in the city’s never-ending traffic and how in the afternoon women will weave their way through the traffic carrying gajras, which are jasmine blooms on a single thread. “People buy that, and you string it up in your car, or I’ll buy it and put it into my purse,” she explains. “And it’s something that is in a sense sacred and pure in the midst of this crazy pollution and chaos of Bombay. It brings you back to yourself. It’s a tradition, and yet it’s also about finding that stillness in the middle of every day.”

Born in Toronto to an Indian father and a Polish mother, Ray catapulted to fame as a teenage model in India and launched a successful movie-acting career in that country. But it was her breakout role in Indo-Canadian filmmaker Deepa Mehta’s Oscar-nominated film Water that has remained her most famous. She hosted the second season of Top Chef Canada in 2012. Ray was diagnosed with multiple myeloma in 2009, a cancer that starts in plasma cells and can cause tumours to form in bone marrow. Ray received a stem cell transplant and was declared a survivor in 2010. Since then, she has become an international speaker and cancer awareness advocate.

When it came to creating a celebrity fragrance that carried Ray’s name, the final product had to be more and do more than sell bottles of perfume, which is why her relationship with the Halifax-based The 7 Virtues Beauty works so well. Begun in 2010 by Barb Stegemann, The 7 Virtues was given a major boost when she appeared on Dragon’s Den and “dragon” billionaire W. Brett Wilson jumped on board, becoming a partner. What sets the brand apart is its business model of ethically sourcing raw ingredients from farmers and paying them fair market value for their crops. Thus far the company has built business relationships with farmers in Haiti, Afghanistan, the Middle East, Rwanda and, now, India.

Stegemann, who was raised on welfare, explains that her company is not a charity but a for-profit enterprise that has ethical practices. “I’m fascinated by this idea of doing fair trade and business. It really breaks down barriers and really builds peace and fosters relationships,” she says. “And it’s about dignity. And I think that really comes out in all of the products.”

Ray has built a successful film career in India since she was 22.

“I’m so deeply connected to India, where there is a lot of work that needs to be done,” she says. “When you’re dealing with overwhelming amounts of poverty and systematic poverty, you have to find new solutions.”

And purchasing crops from local jasmine farmers puts money into the community and empowers its citizens. But beyond helping the economies of these nations The 7 Virtues offered Ray another aspect that was as personal to her—none of the brand’s fragrances have phthalates, sulphites or parabens. After her cancer diagnosis, Ray became aware of the chemicals in everyday household cleaning and beauty products.

“One of the first things that I did while I was still in the middle of my treatment was throw out anything toxic in my house.”

So what does the fragrance contain? In addition to the jasmine of its name, it has notes of frankincense and myrrh, patchouli, orange blossom, vetiver, cardamom and ginger.

And Ray makes it clear she got to make the final selection of the fragrance. “I’m such a proud Canadian and even though I’m not spending a lot of time here now, I wanted to still leave a legacy in Canada,” she explains. “Canada has been so good to me. Canada brought me back to life, so I’ll always owe Canada for that. This country has given me so much that I want to continue my presence here, in whatever form it’s going to take.”

A version of this article appeared in the October 2016 issue with the headline,”Message in a Bottle,” p. 20-21.